The goal of today’s dive was to sample lavas and take sediment cores on large flows located on the eastern flank of the South Rift of Axial Seamount. An analysis of the recent high-resolution AUV bathymetry suggests that two of those large flows may have resulted from the same eruption.

The dive started on the deeper flow and went west toward the volcanic axis. Rocks collected on the two large flows are both rich in plagioclase crystals and both flows are covered by 20-30 centimeters of sediments. The similarity of the two flows is consistent with the idea that these lobes are from the same eruption. Alternatively, the lobes might have come from two successive eruptions during a short period. The greater thickness of the sediment here than on other South Rift flows we saw in 2013, and the presence of a white sediment layer at the base of the cores that was not found in the cores taken in 2013, suggests that these two flows are older than the other flows. We think those other flows are associated with the more recent formation of the summit caldera. These big flows might be associated with an earlier cycle of the caldera formation. The chemical analyses of lava samples, as well as the radiocarbon dating of the foraminifera shells in the base of the sediment cores, will help confirm or disprove our hypothesis. 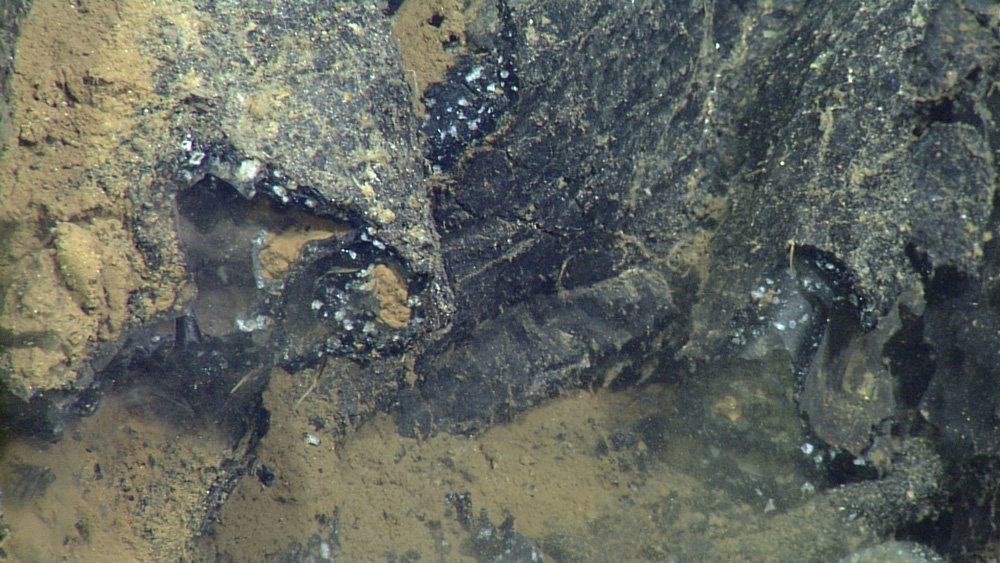 Plagioclase crystals (white dots visible on broken surfaces of the black volcanic glass) are abundant in this sheet flow. 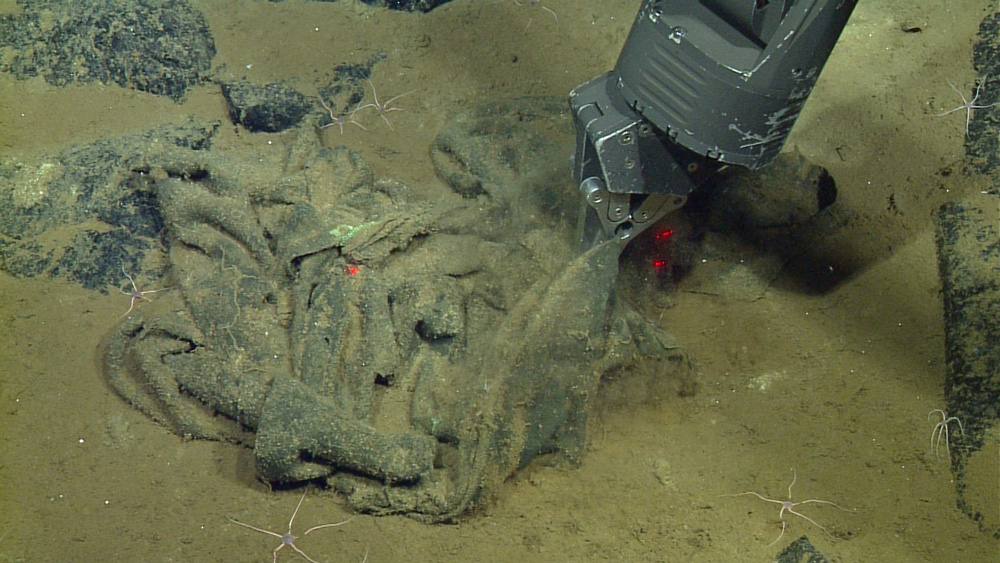 We thought this piece of fabric was a sheet flow with a strange surface texture when we first came upon it, but as it did not crush when we picked it up with the ROV’s manipulator arm, it proved not to be glassy lava. 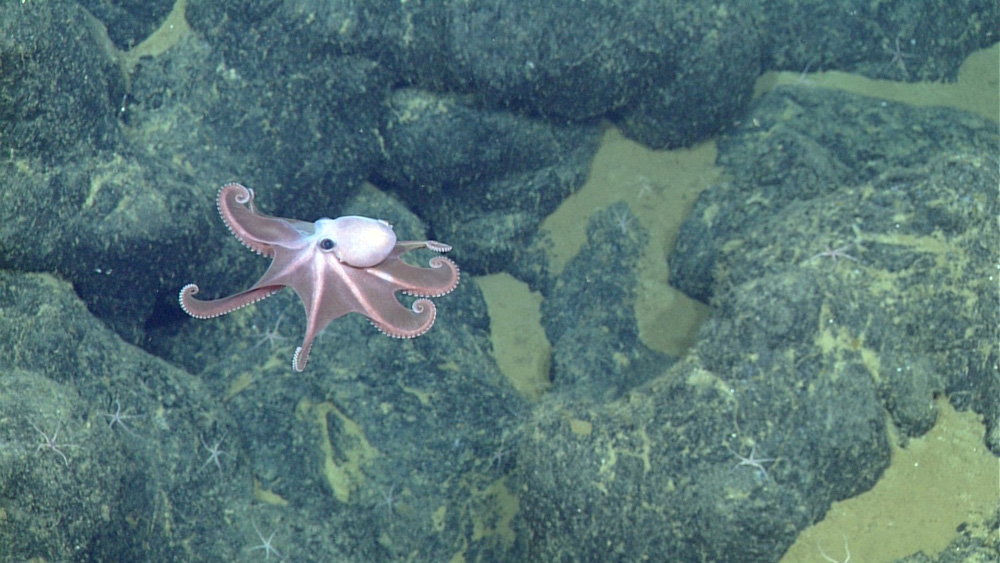 An octopus (Benthoctopus sp.) glides above the moderately sedimented pillows of an old lava flow.

One of the most useful facets of ROV dives is the ability to make direct, on-location observations. Satellites, seismometers, and even AUV-derived maps are no match for the insights that an ROV dive can provide. The opportunity to sit in the control room for the ROV Doc Ricketts, observe the seafloor through the ROV’s cameras, and communicate with the crew and scientists has been invaluable for me. I have been studying acoustic impulsive events, similar in character to gunshots or explosions, from Axial Seamount’s 2015 lava flows using seismometers in the Ocean Observatories Initiative cabled seismic network in Axial’s caldera. Before this expedition I relied on seismometer and hydrophone records of ground motion and water pressure with a smattering of videos, pictures, maps, and personal communications from other expeditions. Though these help, nothing compares to seeing the seafloor “in person” with the ROV.

Our recent dives on Axial Seamount’s new lava flows have revealed numerous blown out pillows and lobes in the areas where the acoustic signals were located, which suggest that the mechanism is indeed explosive. The favored explanation is that water becomes trapped under or within hollows of pillows, flashes to steam, and exceeds the strength of the confining rind. One exciting implication of these findings is that, if this mechanism is widespread, it could be used to greatly increase the range at which we can hunt for seafloor eruptions. Underwater eruptions are rarely observed while they happen and often only found months to years after by lucky dredges, ROV dives, or concerted remapping efforts. However, sound carries in the ocean and well-placed hydrophone networks could pick up noisy eruptions from many kilometers away, greatly improving our understanding of just how active the deep sea can be. 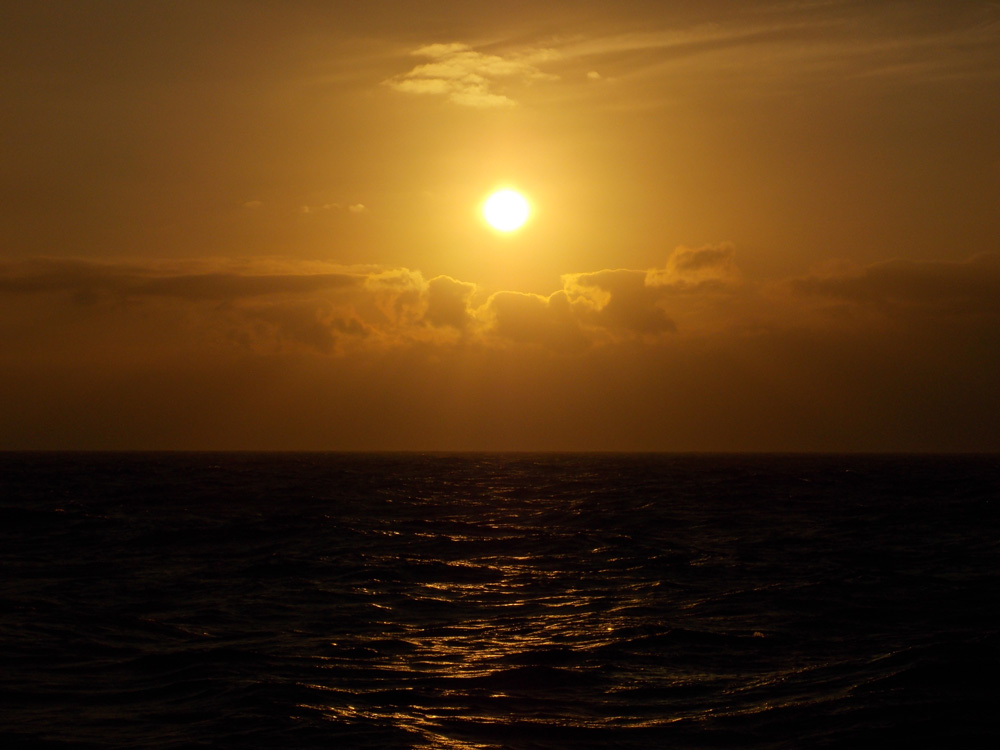