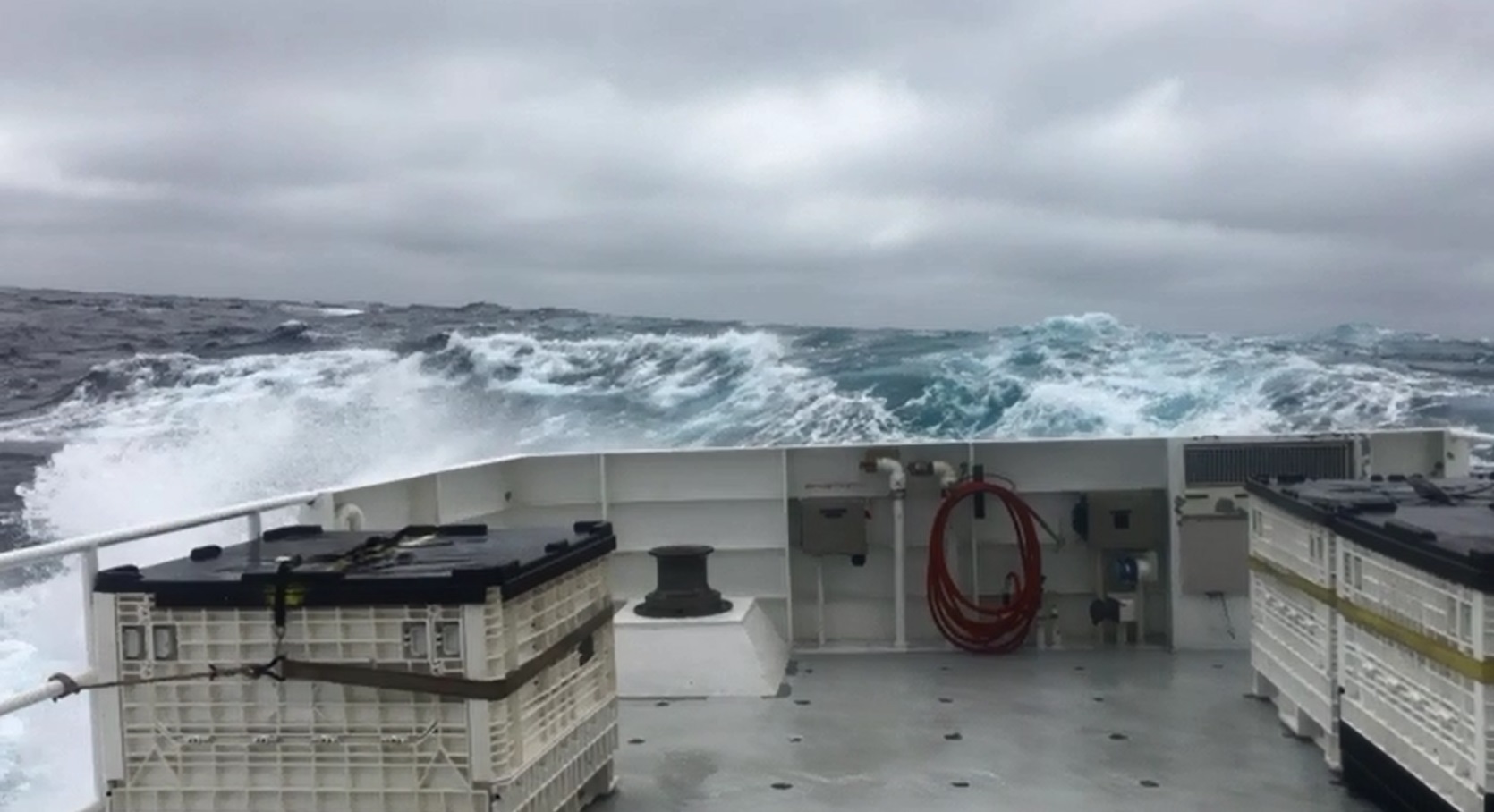 We are crossing the Escanaba Trough of the Gorda Ridge right now, five kilometers south of NESCA (Northern Escanaba Trough). NESCA was to have been our first dive target of this expedition but the weather continues to be awful. We held a small ceremony, waving and blowing kisses to the hydrothermal vents we know are just over three kilometers below us, and kept on going.

Rob Zierenberg (“Z”), Stephanie Ross, and Dave Clague were out here exactly 30 years ago in even worse weather. In the cruise report from that 1986 expedition, Z had written this about their “Dive Interlude” while they awaited better weather:

At the conclusion of dive 657, sea conditions were too rough to permit continuation of the dive program. [R/V] S.P. Lee continued to conduct limited scientific operations; Sea Cliff was secured and Transquest maintained station waiting for conditions to ameliorate. The seas built steadily for the next 24 hours, and weather reports showed no change in the long-term predictions. At 23:30 on 21 July, a decision was made to sail Transquest back to Eureka and wait for better weather.

Transquest arrived in Eureka to begin what was hoped would be a short interlude. What followed was a month-long period of high winds and rough seas that prevented Transquest from returning to the work area, despite several attempts. On 21 Aug, S.P. Lee departed Eureka to fulfill other commitments, and the U.S. Navy assigned USS Point Loma to act as surface support vessel for further dive operations.

With the weather showing a marked improvement, Transquest sortied from Eureka at 17:00, 21 August (day 32 of the Eureka hostage crisis). Conditions remained marginal throughout the transit to Escanaba Trough, but the seas dropped after Transquest and Point Loma rendezvoused in the NESCA area. Because of the unanticipated and lengthy interruption caused by the bad weather, and the limited remaining time that Transquest and Point Loma were available, only eight days remained to complete the 1986 dive program. Dives commenced again on 23 August. The dive time was split between the NESCA and SESCA sites in Escanaba Trough in order to further delineate the extent of the sulfide deposits mapped during the 1985 and 1986 work aboard S.P. Lee.

The sun has begun to peek out occasionally, but there are still lots of whitecaps, and the windows are still being washed regularly by spray from waves slamming the ship. It is a challenge to walk down the passageways of the ship, which offer a straight, rectangular frame of reference. But as the ship tosses and heaves the walls will jump abruptly at you, or the floor will drop out from under you without warning. As the ship rides up on a wave, each step is a slow, deliberate struggle, as it descends, it’s an easy dash. I collected comments from others in the science party about the experience:

Rob Zierenberg: “Same as it ever was.”

Stephanie Ross: “I’ve seen much worse weather here at the Gorda Ridge. The motion of the ship is kind of exhilarating, and simple tasks like standing and walking provide a good core workout. However, getting to do an ROV dive here on the Escanaba Trough and see how it’s changed over time would be more exhilarating.”

Morgane Le Saout: “Even if there is nowhere dry to exercise, moving around in this weather and even just taking a shower is like doing gymnastics.”

Corinna Breusing: “I will do perfectly during my next ballet lessons, as these conditions really train me to keep my balance.”

Shannon Johnson: “I love Zophran and lying in a beanbag chair on the floor. Not much else. I am marveling at the abilities of the crew and pilots to still do work. They are amazing.”

Jim McClain: “At least we’re not steaming in the trough of the waves.”

Rob Young: “Living in somewhat rough seas can be a challenge. As the ship rolls and pitches, you experience constantly fluctuating g-forces. Even climbing into your bunk can be a challenge. One moment you’re light as a feather and a couple seconds later you’re twice as heavy as normal. As long as you don’t get seasick it’s pretty fun.”

Kris Walz: “The days go by a lot faster when we do long ROV dives and spend evening hours sampling critters, compared to rough transit days. These are long days but will all be worth it when Doc Ricketts gets in the water.”

Dave Clague: “I really can’t wait for the first dive to get underway. I don’t know how I did so many cruises over the years that had 10-day transits before work began.”