Exploring lava flows from a 2015 eruption 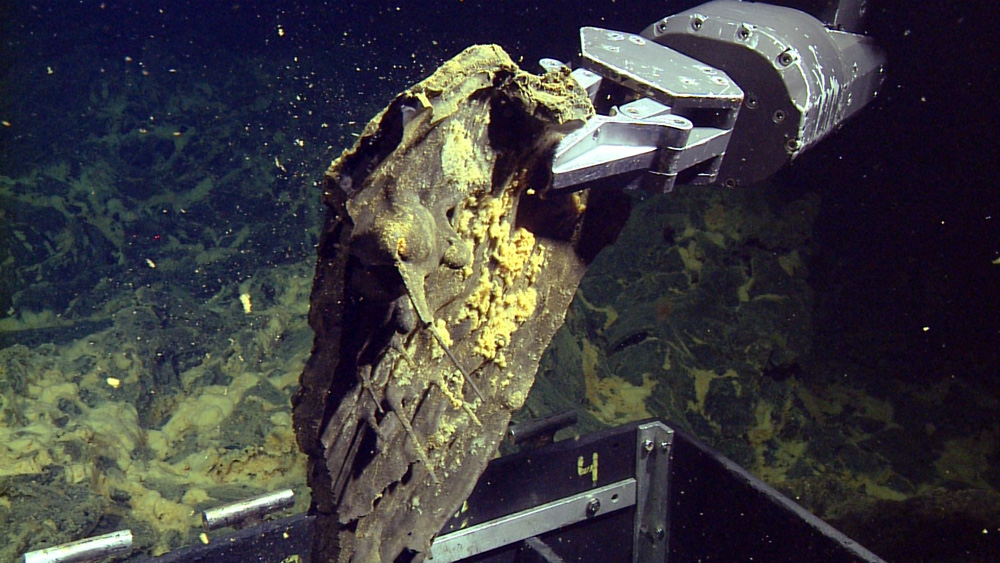 The ROV dive today covered lava flows of the April-May 2015 eruption on the mid-North Rift of Axial Seamount, in between those sampled yesterday and those sampled on August 1. The good folks on the R/V Rachel Carson mapped the axis of the North Rift over the past few weeks for us with the two MBARI mapping AUVs, and we are using those maps to guide our ROV dives. This area had not been mapped from AUVs before, however, so we compared the recently collected AUV bathymetry against low-resolution bathymetry collected from ships prior to the eruption to try to identify where there might be new lava and new fissures.

The ROV dive began up-rift of a 2015 flow we had identified in the difference maps, on a fissure that had widened since the pre-eruption bathymetry was collected. Almost immediately we saw dribbles of glossy black lava pillows with yellow bacterial mat in the cracks where heated fluids were still emanating, indicating that this was freshly erupted lava. But it was so thin that the difference maps hadn’t resolved a new flow, so the 2015 eruption is larger than we thought, but as this part was quite thin it shouldn’t add much to the overall volume we had calculated from the difference maps.

The dive continued down-rift along the eruptive fissure and crisscrossed onto lobes of the flow on both sides. We collected samples of this and the older flows in the vicinity. We want to learn how large this flow is, how it was emplaced, if it had generated the explosive sounds recorded by instruments in the caldera, how long it will take to cool, how often eruptions have occurred on this part of the volcano, and if the 2015 flow is typical of the eruptions here on the North Rift and elsewhere on the mid-ocean ridge system.

At the end of the dive we explored two older, large inflated flows. These are like tumulus structures that occur on land where the source of the lava is uphill and pressurizes a lava tube until the thickened crust lifts and cracks open. However, here the source of the lava was likely from the underlying dike that fed the flow. The up-tilted blocks gave us a nice cross-section of what a large sheet flow looks like, from the jumbled surface that is usually all we see, through to the massive, almost columnar-jointed interior.

It is day three of my very first research cruise, and I feel like I’m getting into the rhythm of both the ocean and the work. My morning consists of getting up early to watch the ROV make its 6:30 a.m. dive, followed by breakfast, and then my first shift on watch at 10:30 a.m. During my three daily watch shifts, I perform one of two tasks: take notes or keep track of significant locations on a GIS map. It has definitely been an educational experience all around since, before today, I had only handled samples in a classroom laboratory. Now I know if samples came from a jumbled sheet flow or the shell of a collapsed pillow because I saw them in situ. I have also learned to recognize when a rock has a manganese coating or a quenched glass layer. I have cleaned rocks, prepped sediment tube samples, and picked glass from wax cores. The highlight of today’s samples was an amazing piece we recovered that actually had solidified lava-cicles on the underside. I do not think I can recommend hands-on experience enough—you learn so much so quickly.