Cruise summary of the Northern 2016 expedition 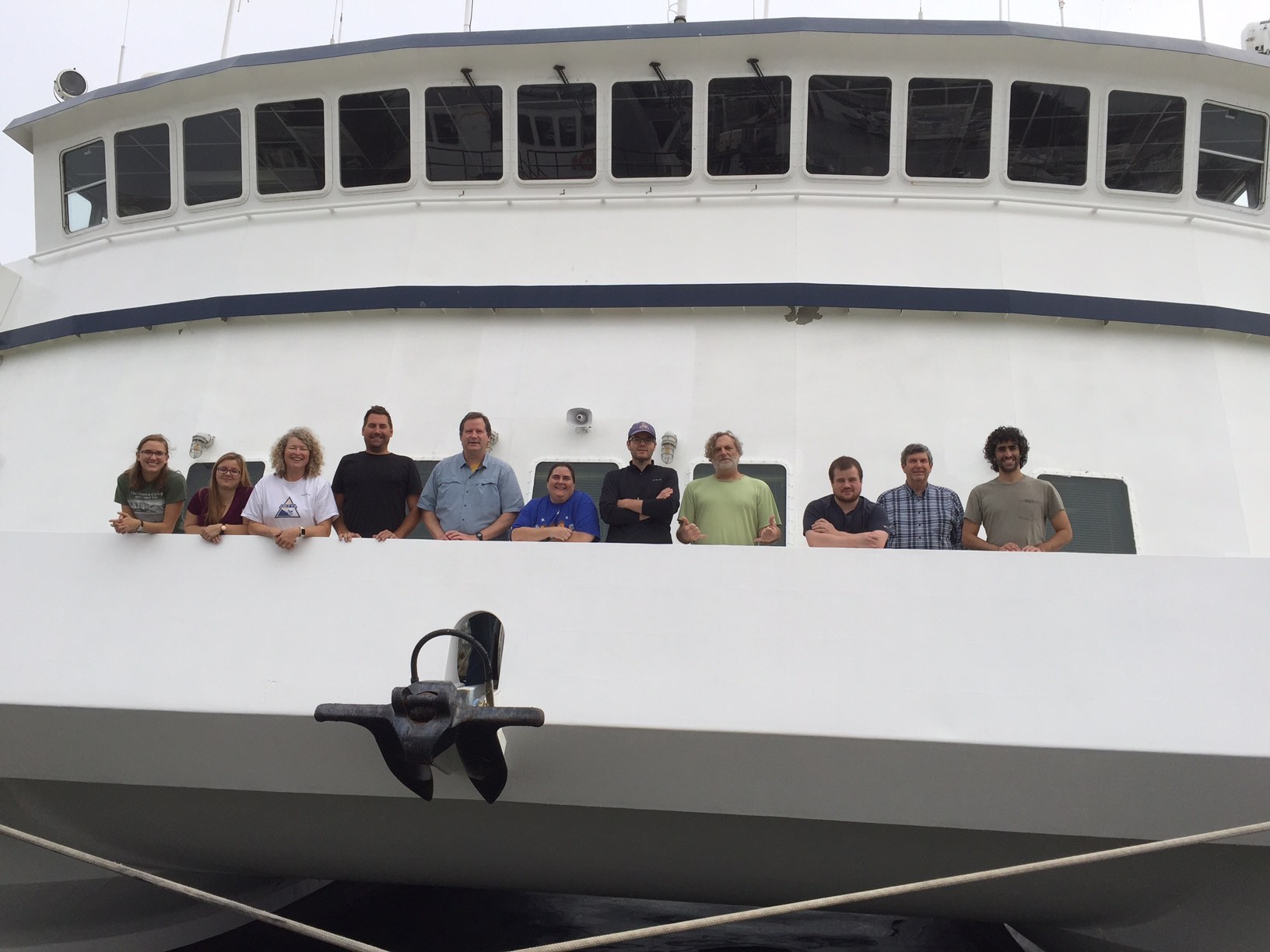 Many thanks to all involved in planning and carrying out this expedition! Successful ROV dive programs rely upon the ship’s crew, ROV pilots, and scientific party on board. Such work is truly a team effort and we are grateful to Captain Andrew McKee and Chief Engineer Matt Noyes and their crew, Chief ROV Pilot Knute Brekke and his talented group of pilots, and all the scientists and students who assisted us in running the dives and processing and curating the collected samples after each dive. It is always a privilege to work with such a great team of professionals. I especially thank Jenny Paduan and Morgane Le Saout who were on both legs and did all the things that needed to get done.

ROV dives also require prior mapping data to design the dives for maximum return. Our planned dives were all to be located at sites with high-resolution AUV mapping data. Many of our maps were collected by MBARI AUVs off the R/V Rachel Carson only a few days in advance of our planned ROV dives. Captain Aaron Gregg and AUV team leader Hans Thomas and their crews and Software Engineer and Chief Scientist Dave Caress achieved great success collecting the needed maps, despite having similar weather issues and several technical difficulties. The successes of our ROV dives reflect the high quality of the maps they collected and processed. Other dives were executed on AUV data collected during previous cruises or, in the case of the dives at South Cleft and Guide Seamount, on EM300 multibeam data collected for MBARI in 1998.

This two-leg expedition with the R/V Western Flyer has been most challenging due to inclement weather, especially during the transits. The culprit was not stormy weather, but strong pressure gradients around a persistent high-pressure area in the northeast Pacific that led to strong southerly winds in a zone offshore northern California. For the most part, the weather was okay farther offshore where most of our dives were planned, but slogging to and from our ports and work areas caused numerous dive days to be lost.

During the first leg of the expedition our first planned dives at the Gorda Ridge were in the worst of the windy zone. We continued northwest to the South Cleft hydrothermal vent site on the Juan de Fuca Ridge, arriving mid-afternoon of our fourth day at sea. A one-hour-on-bottom dive was done to determine that the site remained active since last studied in 2005, and it also served as a test dive to be sure that the rough bouncy seas had not damaged the ROV. The following day, we did a full dive at the site, which was discovered by scientists from the US Geological Survey (USGS) in the 1980s, some of whom were along with us on this leg. The primary purposes were to collect vent animals for the biology program and to sample the 338° Celsius hydrothermal fluids to see if their composition had changed significantly in the long interval between sampling. As a bonus, we recovered two temperature probes deployed in 2005 by Bill Chadwick, a scientist from Oregon State University on our second leg this year.

At Axial Seamount we spent the first half of the final dive of the first leg collecting animals from the CASM (Canadian American Seamount) hydrothermal vent field at the northern end of the caldera floor. Then we continued north to examine and sample lava flows and fragmental volcanic glass and ash (clastic) deposits on the rim of the caldera and two small flows that erupted in April/May 2015 on the upper rift zone. On this dive and two on the second leg, we sampled 2015 lava flows along the north rift as well as underlying flows. On the upper rift zone the underlying flows were old, but deeper on the north rift it appears to be dominated by a few young extensive sheet flows with inadequate sediment on top to core, indicating that they are young. On the  dives of the second leg, we found several additional flows of the 2015 eruption that were too thin to have been detected in the difference map we constructed from pre-eruption shipboard bathymetric data and post-eruption high-resolution AUV-collected data. On top of one of the thicker 2015 flows we discovered a field of small black smoker hydrothermal chimneys. These chimneys, although emitting water as hot as 263° Celsius, had only limited vent communities with no Ridgeia tubeworms observed. Elsewhere along the eruptive fissure, widespread low-temperature hydrothermal venting was common, characterized by yellow bacterial mats and iron-rich clay deposits. Only rarely was venting vigorous enough to detect shimmering water, and temperature measurements were always below 30° Celsius. The most active vents were located by the presence of white bacterial mats, and one area had scale worms and rare Ridgeia tubeworms.

One dive on each leg of the cruise was dedicated to voluminous prehistoric lava flows on the deep south rift of Axial Seamount. The two largest flows appear to be roughly the same age, as both have roughly the same moderate sediment cover, and to have similar mineralogy, as lavas from both are rich in plagioclase feldspar. They may be related to formation of the present caldera or perhaps an earlier one, as eruption of such large flows could have evacuated the magma chamber and triggered the collapse of the caldera at the summit. Caldera collapse, in turn, allows seawater to enter along the faults that define the caldera and penetrate deeply into the volcano. The seawater is heated and flashes to steam to drive highly explosive phreatomagmatic eruptions. Such eruptions are the source of some of the thick clastic deposits that blanket the rims of the caldera. The key to linking these different events is their similar ages, so we spent a lot of our dive time collecting sediment cores to determine minimum ages of the underlying flows and layers of ash using radiocarbon dating of foraminifera microfossils in the sediment.

On our first dive of the second leg (after a rough, 29-hour-long transit from Newport, Oregon, and limited to about a half-day), we sampled the clastic section on the east side of the caldera. The primary goal was determining the age and distribution of the ash deposit, a phreatomagmatic grey-green unit, sampled along the northern rim of the caldera on the CASM dive. We expected the unit to thin away from the caldera, which turned out to be correct. The series of cores generally either ended in the grey-green unit or in a sandy glass-rich unit that fell out of the base of the core tubes. Several of the cores most distant from the caldera also collected a unit below the sandy glass-rich layer that contains abundant foraminifera, so we should be able to get good age control on when these explosive eruptions occurred and if they correlate with the large volume flows deep on the rift zones.

At the end of the second leg, we decided to get ahead of the worst of the wind and seas by departing a day early from Axial Seamount. We added another unplanned dive, this one on Guide Seamount, closer to Moss Landing and south of the forecast high wind region. We explored mainly the biology and ecology of this under-studied seamount. Three short MBARI ROV geology dives in 1998 and 1999 and a few rock dredges done by the USGS 20 years earlier were the only previous sampling. The seamount is about 16 million years old and consists of alkalic basalt, hawaiite, and mugearite lava flows. At least two of the cones on the summit are blanketed by lithified pyroclastic debris from mildly explosive eruptions. Fortunately, we were able to access mapping data and prior dive tracks stored on the servers back at MBARI so we could design a dive plan.

During the first leg at South Cleft and Axial Seamount, on three full-day dives and one dive with one hour on the bottom, we collected 29 lava flow samples, 25 cores for dating, two sulfide chimney samples, four hydrothermal vent fluid samples, and fauna and bacterial mats from hydrothermal vent sites at South Cleft and CASM on Axial Seamount. During the second leg at Axial Seamount, on three full-day dives and one half-day dive, we recovered 80 lava samples, two hydrothermal sulfide chimney samples, 32 cores for dating, and a few collections of vent fauna and bacterial mats for our biology colleagues from the prior leg. The dive at Guide Seamount recovered 25 collections of animals, one of which is undoubtedly new to science, and three rock samples.