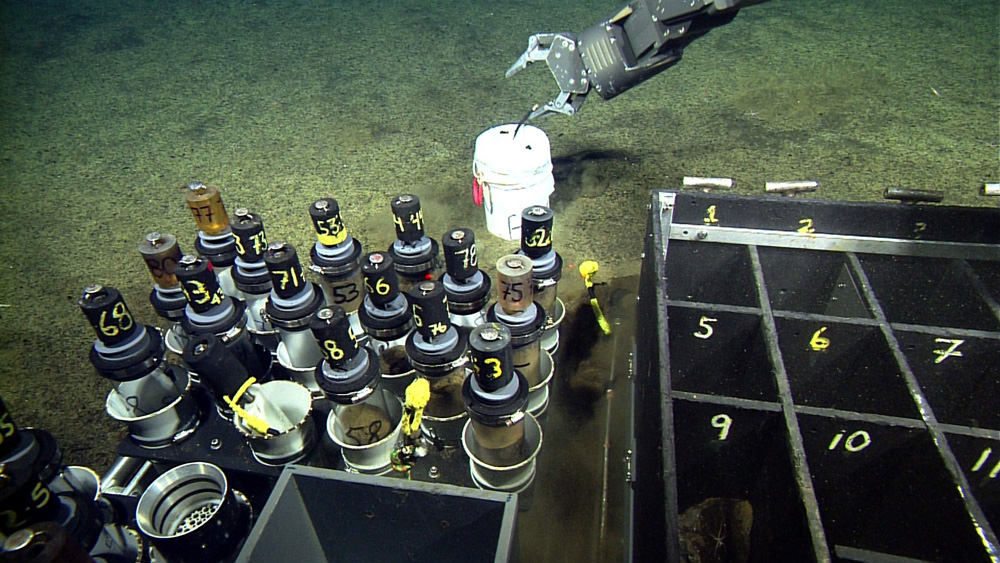 At the end of the dive we deployed a "tephra collector" for Bill Chadwick to collect ash particles that might advect from the plume during the next eruption at Axial (and whatever else lands on it in between).

After a long steam from Newport, Oregon, we arrived to Axial Seamount about midday. Although we only had time for a short ROV dive, it was a very important dive for some of the long-standing work we have been doing here. The primary objective of today’s dive was to collect a series of sediment push cores along a transect from the distal flank of the volcano to the summit. The goal was to determine whether or not a conspicuous green mud can be found in locations far from the summit. We have known for some time that this green mud occurs around the large summit caldera of Axial Seamount, but not until today did we know how far it extended away from the caldera.

This green mud contains unusual minerals formed by hydrothermal alteration that we typically do not see elsewhere on the mid-ocean ridge system aside from on top of large seamounts like Axial Volcano. We think the green mud formed deep in the volcano and erupted when the large summit caldera formed. We recovered several short push cores that indeed contained the green mud, but it was much thinner than in locations closer to the caldera, thus confirming our earlier hypothesis that this green mud likely originated from the caldera when it formed approximately a thousand years ago.

This is my first time at sea on a research cruise. I got to witness the ROV dive today, at a location where we were the first people to see and sample this part of Axial Seamount. My first watch in the control room during the dive consisted of keeping track of collected rocks, push cores, and the locations in which we collected them.

It was thrilling to be a part of the process; watching the ROV pilots at work was fascinating. Although the motion of the ocean has taken some getting used to, it’s very exciting and rather funny to stagger around with everyone trying to stay upright.