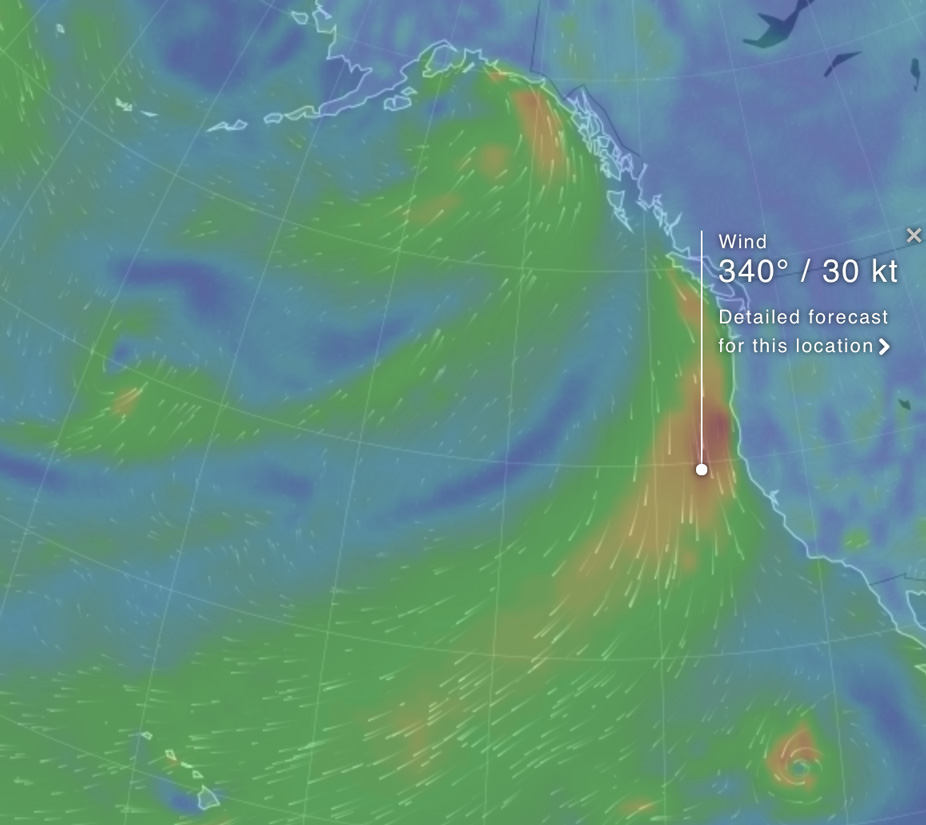 The wind picked up all day and with it the swells. This evening we are now SW of Cape Mendocino and heading NNW at about five knots. It is overcast; the wind is blowing 35 knots from the north and “it has definitely gotten lumpier,” as Chief Scientist Dave Clague put it.

As Captain Andrew McKee put it, the swells are easily 10 feet high with some 14 foot sets. We are taking the seas “broad on the bow” (not heading straight into them but with most of them hitting the starboard bow), so the ride is not as bad as it could be. The real problem is that the swells are being locally generated, so last for a very short period (only about nine seconds). He explained that when the waves aren’t “square” (as in equal wave height and period), it is difficult for the ship to climb up and over without slamming into them. He said his strategy is to go slowly enough to keep the ship from getting slammed hard while keeping people comfortable and still making headway.

Captain McKee explained that we are in the pressure gradient between a very large stationary high in the North Pacific and the stationary low over California where there is an ongoing heat wave. These conditions are not that unusual for the NE Pacific. What is unusual, he said, is that the features are remaining stationary; the jet stream usually moves them along. There’s no waiting it out; we can only keep going and get through this windy stretch.

The conditions are predicted to persist through Saturday. Tomorrow afternoon we should be passing over the Northern Escanaba Trough (or as we call it, NESCA), our first dive site as originally planned. We will continue on and should reach North Cleft on Saturday, but no one expects the weather will be cooperative there either. Sunday will likely be our first dive.