Sampling fluid from a hydrothermal vent 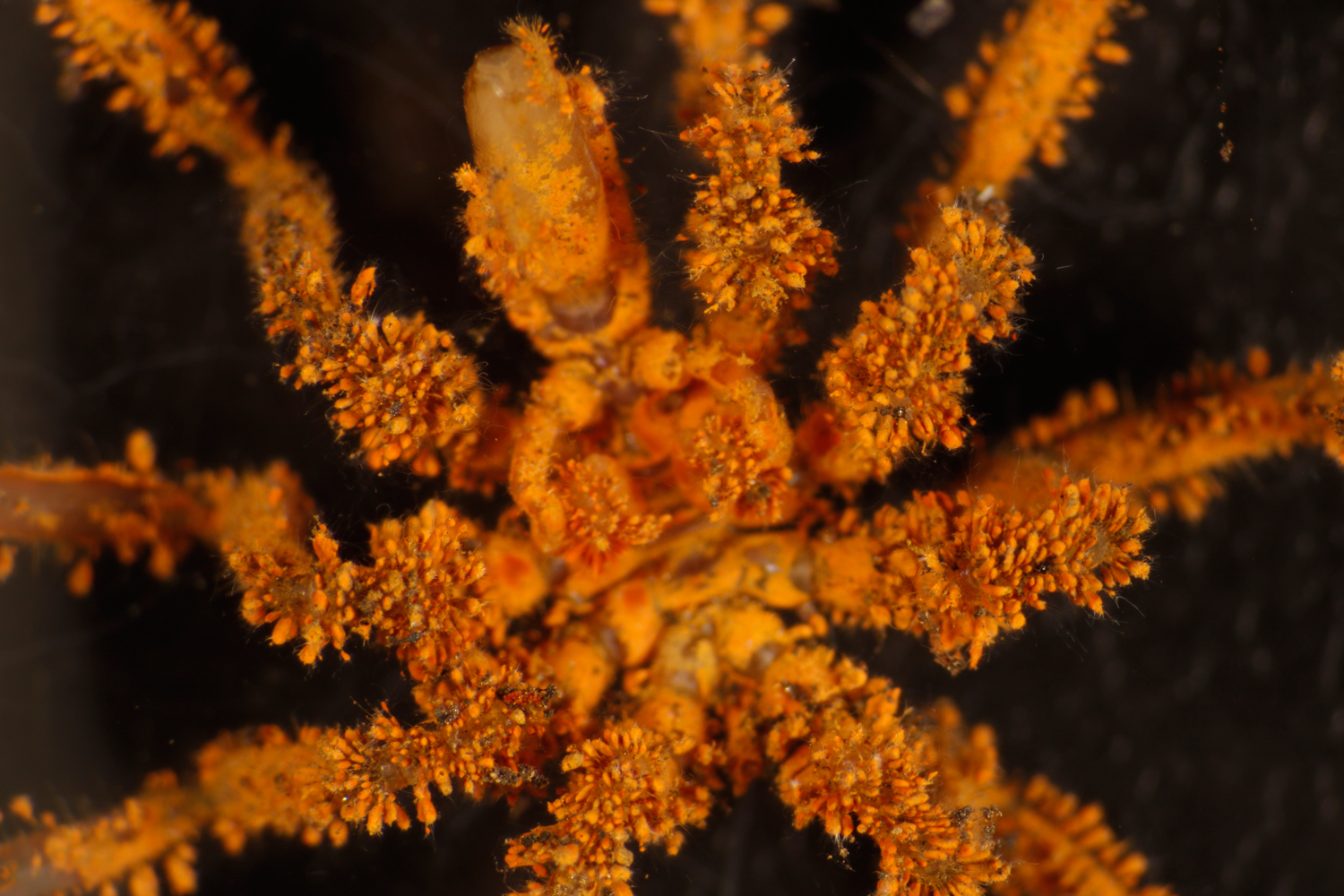 Underside of a sea spider Ammothea (the proboscis - head end - is toward the top). Its body and hairs are heavily coated with iron-rich encrustation as well as bacterial filaments. The normal color of this animal is pale yellow.

Today’s dive started at the same point as our short dive yesterday at a hydrothermal vent site that was named “Vent 1” by the US Geological Survey (USGS) years ago. Our priorities today were to do the fluid sampling we ran out of time for yesterday at the same chimney the biologists had sampled, drive south along the axis of the ridge to another vent site named “Plume,” and then do a transect east to collect sediment push cores on the old lava flows outside the axial valley. We conduct radiocarbon dating of the shells of the single-celled animal called foraminifera that we sieve from the base of each core. Because these shells had settled on a flow soon after it erupted, their age gives us an approximate age of the flow underneath.

The fluid sampling is a very tricky maneuver for the ROV pilots, but it went smoothly. The temperature of this vent was 338o Celsius and the pH was 3.0. The elemental composition of the fluids (e.g., sodium, chloride, potassium, calcium, sulfur, manganese, iron, copper, and zinc) will be analyzed on shore to compare these fluids with the composition previously measured here and at hydrothermal vent sites elsewhere in the world.

The fluids at this site had the highest salinity and the highest iron content of any vent fluids known at the time when we first sampled them. The high salinity arises due to super critical phase separation, a process similar to boiling water, but which occurs in fluids with the salinity of seawater at higher temperatures and pressures (more that 400° Celsius, and over 300 times atmospheric pressure). These conditions are very difficult to duplicate in laboratory experiments. We want to know if the fluids are still very salty and with high iron and dissolved metals such as copper or zinc, or if have they evolved back towards normal vent fluids in the 32 years since they were first sampled and the system has continued to cool. The abundant iron-rich flocculent sediment and bacterial mats that blanket the areas around the hydrothermal vents suggest these fluids are still very iron-rich.

On yesterday’s and today’s dives to the Vent 1 and Plume sites at South Cleft, we visited sites the USGS has been studying since 1981. I was hired by the USGS to work on Juan de Fuca data in 1983, in preparation for a 1984 Alvin submersible dive cruise. My  colleague and good friend Chris Gutmacher developed syntactic foam benchmarks for the dives to mark key locations and help guide us as we drove through the South Cleft, the narrow axial valley of the ridge, which blocked the signals from our acoustic transponder system. She tested many different shapes, sizes, colors (yellow versus white versus orange), and reflective paints, and determined how far off the bottom the benchmarks should be for a balance of visibility and portability. These markers have stood the test of time. We found one of her 1984 markers at Vent 1, a different marker I deployed at the Plume Site in 1988 (with a bottle attached), and another one of Chris’ markers toward the end of today’s dive. The markers near the hydrothermal vent needed to be shaken in order to read the identifying numbers and letters, but the marker we found today outside of the South Cleft and away from the hydrothermal sediment was as easily read as when Chris made it 32 years ago.

We’ve learned that the chimneys at the Plume site seem much the same as in 1984 but with thicker hydrothermal sediment covering many of our markers. The Vent 1 site, on the other hand, is more vigorous and has higher temperature fluids, and the chimneys are larger than in 1984. Interestingly, however, the orifice that the HOBO temperature data recorder was in has not grown since 2005.