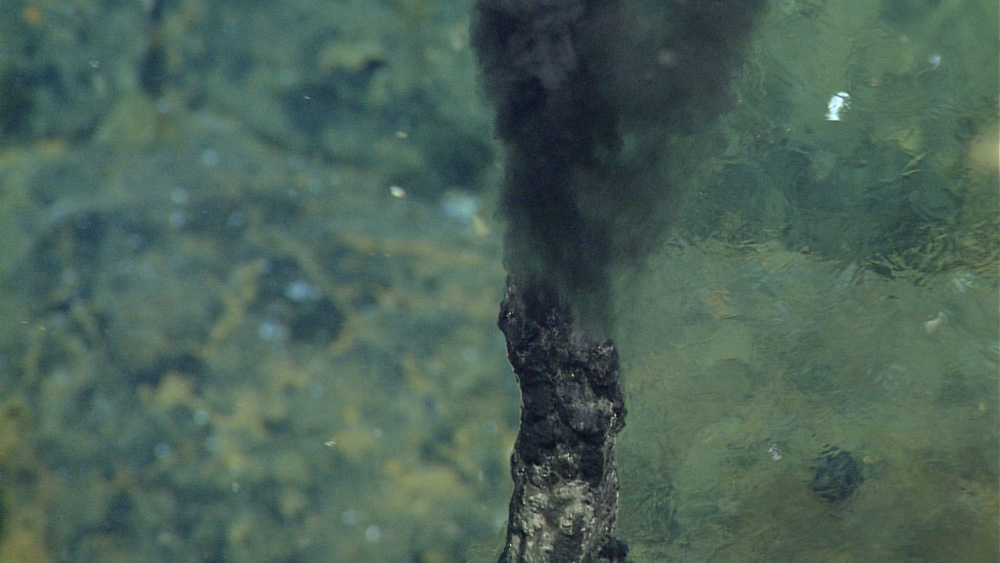 Today’s ROV dive was full of surprises, and one of the biggest surprises for me was finding miniature black smoker chimneys near the top of one of the thick lava flows that erupted in April-May 2015. This particular lava flow is over 60 meters thick and we were traversing across the thickest part of the flow when we noticed the visibility was getting worse. While investigating an area that had extensive white staining, we discovered there was active hydrothermal venting in that area, and then we saw a jaw-dropper: numerous little chimneys that were each emitting black smoke. It looked like we were flying over a miniature diorama of an industrial city with lots of little smokestacks belching away. The chimneys were very narrow (one to 10 centimeters wide), not very tall (20 to 50 centimeters tall), and we measured a temperature of 263° Celsius. We encountered many of these chimney clusters over an area about 100 meters across at the apex of the lava flow. The amazing thing was that they were there at all!

Most of the time, high-temperature (250-350° Celsius) hydrothermal vents are only found in places where seawater can circulate deep into the crust (where it is really hot) and where the fluid pathways are isolated (so there is little mixing to dilute the hot water). These are often found near fault scarps because the faults provide deep, isolated fluid pathways. Good examples are the ASHES and CASM (Canadian American Seamount) hydrothermal vent fields at Axial Seamount, which are located near the caldera fault. On the other hand, hydrothermal vents on newly erupted lava flows are usually low temperature ( (less than 50° Celsius) and very diffuse because most of the heat is shallow and coming from the cooling lava flow and the feeder dike from which it erupted. The shallow crust and the lava flows are often permeable and allow lots of mixing with cold seawater, which leads to diffuse lower-temperature venting. This is why these mini black smokers were totally unexpected—they had never been seen before in this setting!

After our jaws dropped in the ROV control room there was also a lot of head scratching as we wondered, “How could these be here?” My thoughts are that somehow there is a source of heat beneath this flow that is deeper, hotter, and relatively isolated (to minimize mixing, dilution, and cooling on the way to the seafloor). These lava flows are on the north rift zone of Axial Seamount, so perhaps this part of the rift zone has relatively deep roots that the 2015 dike was able to tap into. This might be consistent with the fact that my colleague, Dr. Jim Holden at University of Massachusetts Amherst, found high-temperature microbes living in low-temperature vents on another of the 2015 north rift lava flows. Vent fauna had found and colonized the smoker vents we found today. We saw limpets, several kinds of scaleworms, and even palm worms, which live at high-temperature vents. It will be interesting to see if these vents persist and if the chimneys keep growing and become a new oasis for deep-sea vent animals at Axial Seamount.