After a terribly long and miserable transit the weather calmed a bit and what was to be a quick test dive became an exciting reprieve from boredom, seasickness, and an otherwise helpless feeling that we’d never get any science done. We had about three hours on the bottom to basically make sure the ROV Doc Ricketts fared better than the scientists aboard and happily it was golden! After an incredibly smooth launch despite the moonpool looking like the big wave surfing spot Mavericks in northern California, we headed to the bottom that was 2,200 meters away. The ROV control room was packed even for the descent, where we saw lots of beautiful pyrosomes, pteropods, and jellyfishes. We were all so happy just to finally see the ROV in the water!

We kept an eye on the transmissometer as we descended. It measures the turbidity of the water, and we were looking for a change in the readings to indicate that we were passing through water that has experienced input from a type of hydrothermal vent called a black smoker. About 20 meters off the bottom, we saw a small change indicating to us that we had indeed descended on an active site. We had been unsure whether this vent field would still be active. No one has visited this site in 11 years, and we could very well have descended on an extinct vent field. 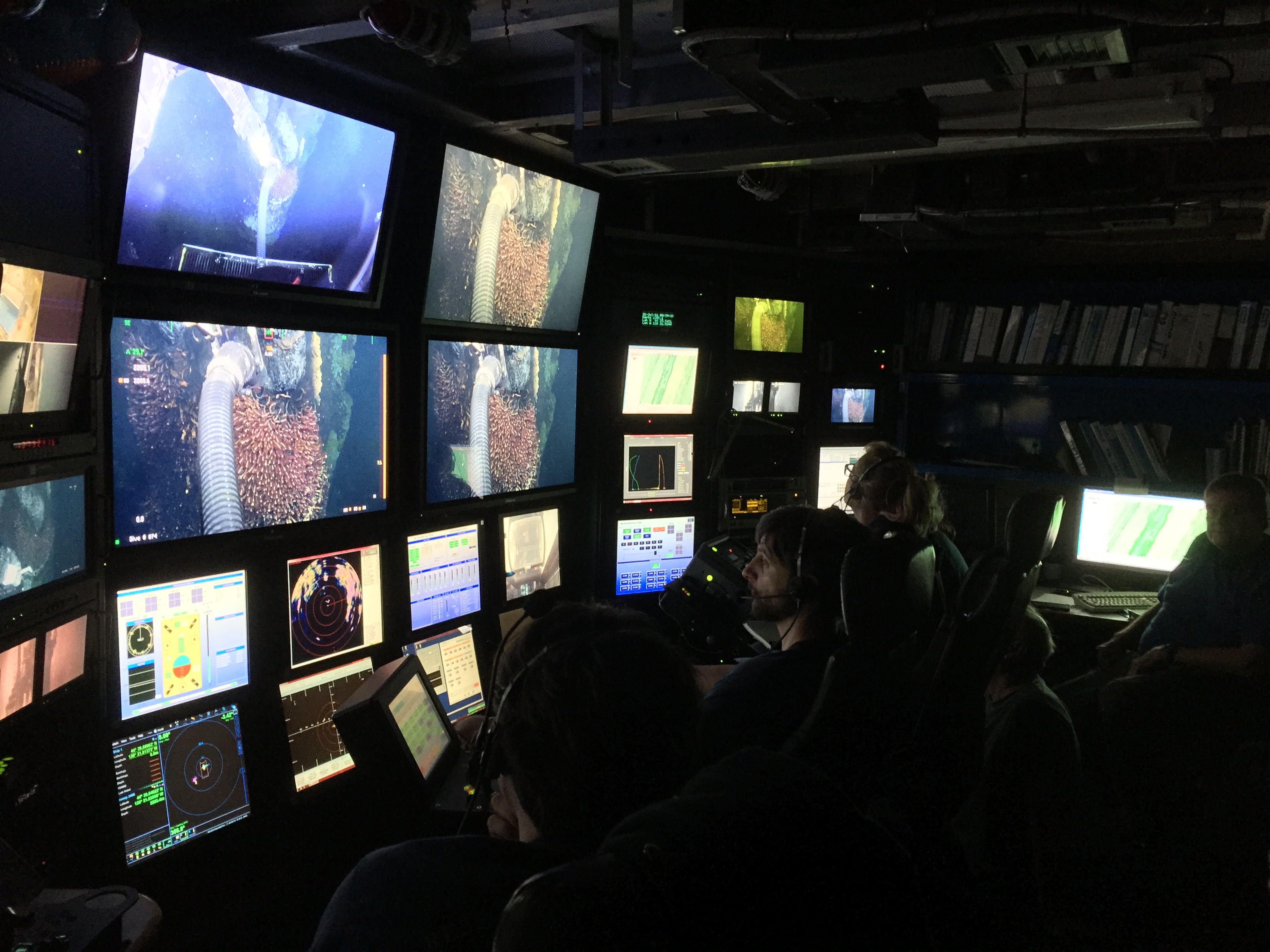 View of the control room while we collected Paralvinella with a suction sampler from a hydrothermal chimney.

Within minutes of reaching the bottom, we saw our first tiny black smoker producing our first important piece of information for the cruise: the vents here are still actively venting fluid. Several minutes later we approached a cluster of very impressive spire-like chimneys that rose 10-15 meters above the seafloor. Black smoke was billowing out of the tops of the chimneys, and in some spots on the structures we identified clusters of tubeworms (Ridgeia) and palm worms (Paralvinella). 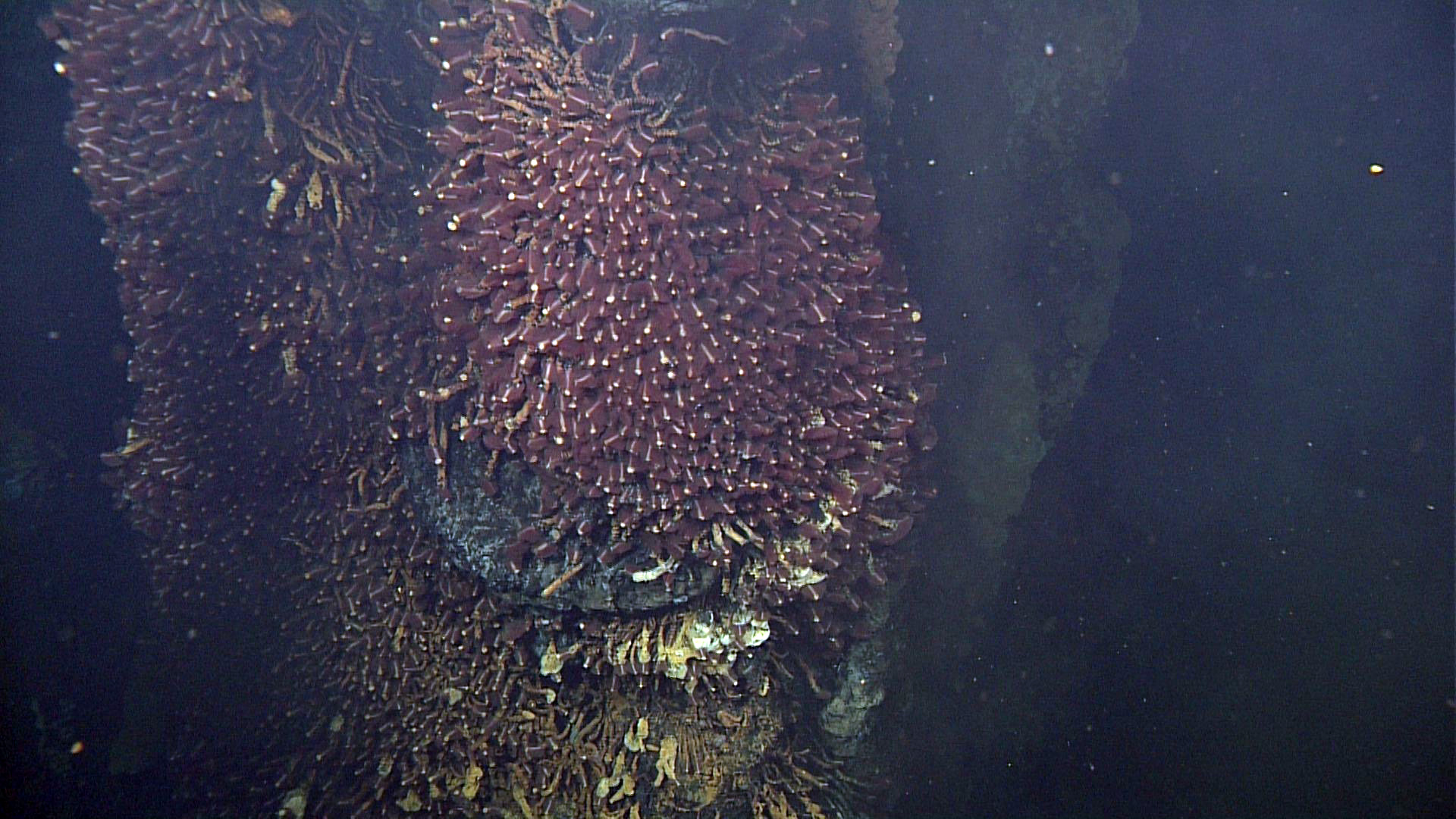 Tubeworms (Ridgeia) growing in a dense cluster on the side of a tall black smoker chimney. Palm worms (Paralvinella) were found above these tubeworms, closer to the vent orifice.

At 7:15 p.m. the ROV was (unfortunately already) coming back to the surface and we rushed to our samples to get them ready for analysis.  Shannon Johnson and Kris Walz started filtering water sampled around the vents for microbes and plankton. Robbie Young, Greg Rouse, and Corinna Breusing dissected tubeworms out of their robust housings, cleaned paralvinellids from sulfidic deposits, and identified other vent animals that were collected as bycatch. Among the many finds were thousands of small gastropod snails (Depressigyra), several ampharetids, and numerous large scaleworms (Polynoidae), some of which are new to science! Not bad for such a short dive. 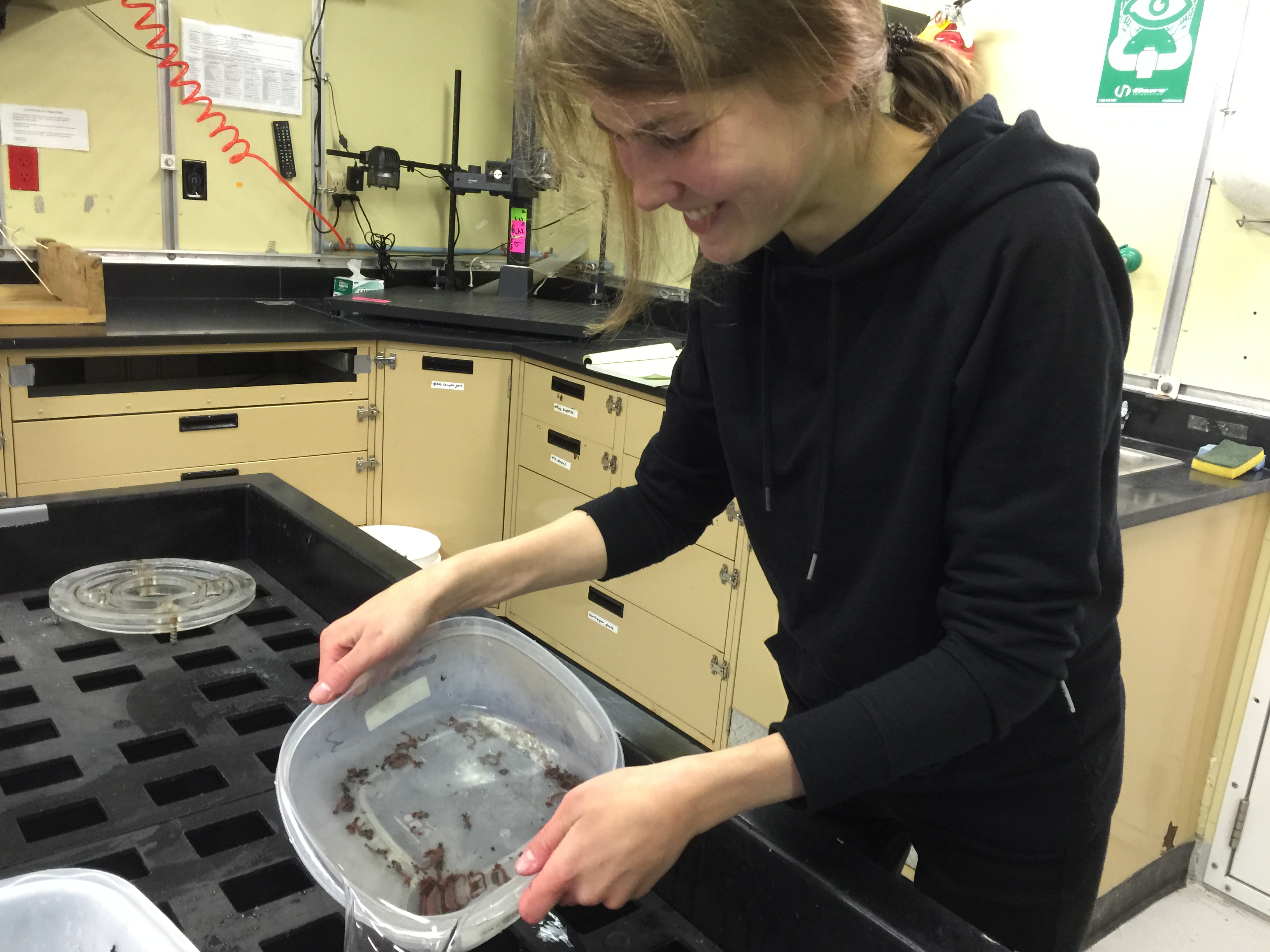 Corinna Breusing has picked palm worms from the suction sampler taken from the hydrothermal chimney for genetic analysis.

The investigations of water and animal samples will give us an idea about the occurrence of larvae and symbiotic bacteria in the vent environment, as well as genetic characteristics that influence morphology and speciation in vent worms.

After three hours of successful sample processing we are full of excitement for our next dive in the morning. Now, hopefully, everything (including the weather) on this cruise can get even better.