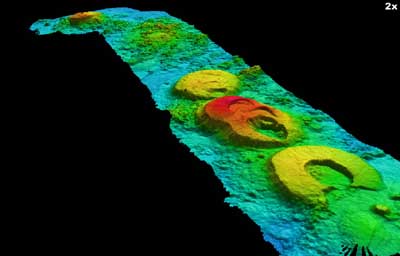 There are many linear chains of seamounts that originate near mid-ocean ridges and are somehow due to excess magmatic activity that erupts intermittently but profusely over extended periods at that same point of the ridge. They are especially common near fast spreading ridge segments, and seem to be preferentially located near bends or offsets in the ridge crest. The chains are often asymmetric, with many more seamounts located on one side of a ridge than on the other. The cones are often flat-topped with pronounced calderas.

A new family, genus, and species of enteropneust worm from the President Jackson Seamounts is reported on the eclectic topics page. Go to the MBARI mapping program for more maps and information about these seamounts.

Our research on near-ridge seamounts

TANEY SEAMOUNTS – Seamounts formed adjacent to mid-ocean ridges are the most abundant on Earth, numbering several orders of magnitude higher than hotspot-related seamounts. The Taney Seamounts are a linear NW–SE-trending, near mid-ocean ridge chain consisting of five volcanoes located on the Pacific plate 300 km west of San Francisco, California. Taney Seamount-A, the largest and oldest in the chain, has four well-defined calderas. These calderas have clear cross-cutting relationships, creating a relative chronology. The caldera walls and intracaldera pillow mounds were sampled systematically by a remotely operated vehicle to obtain stratigraphically controlled samples, a unique aspect of this study. Changes in lava geochemistry are consistent with an open-system sub-caldera reservoir that undergoes periodic collapse, replenishment, shallow crystallization, and eruption. Replenishing magmas contain large, anorthite-rich plagioclase crystals that exhibit sieve textures and zoning indicating interaction with percolating melt. The enrichment of elements in the lavas that are incorporated in plagioclase (e.g. aluminum, strontium) provides chemical evidence for the interaction between mantle-derived melts and plagioclase cumulates in the lower oceanic crust or upper mantle (8–12km), prior to magmas entering the sub-caldera plumbing system. Based on trace element variations, the erupted lavas vary from typical peridotite-derived normal mid-ocean ridge basalt (N-MORB) compositions to those with an apparent residual garnet signature. Geochemical and thermodynamic modeling shows that decompression melting of a MORB mantle peridotite re-fertilized by garnet pyroxenite partial melts can reproduce the garnet signature observed in the Taney-A edifice lavas. Hence the magmatic architecture of Taney Seamount-A is characterized by the melting of a mixed lithology mantle, melt–rock interaction in the upper mantle to lower oceanic crust, and open-system evolution in a sub-caldera magma reservoir. 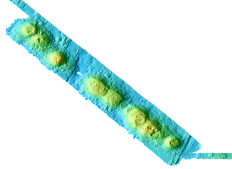 GORDA RIDGE – The President Jackson Seamounts are a 65km long, linear volcanic chain west of the northern Gorda Ridge. Dredged basaltic lavas and hyaloclastites are normal mid-ocean-ridge basalts (MORB). The seamount lavas are similar in many ways to those erupted at the adjacent ridge but have some important geochemical differences: they have more primitive compositions, with higher MgO than the ridge lavas; they have lower TiO2 and FeO and higher CaO, Na2O, and Sr at comparable MgO than the ridge basalts; they contain phenocrysts (“conspicuous crystals”) in equilibrium with the melt; and they lack the compositionally diverse glass inclusions and compositional zoning common in phenocrysts of most ridge basalt. The seamounts have multiple, nested calderas or pit craters, stepping downward toward the ridge axis, indicating formation in the active, near-ridge, extensional environment. The predominantly primitive nature of the lavas suggests that they pass through crustal magma chambers underlying the calderas very rapidly. The lack of evidence for magma mixing suggests that batches of magma are delivered to the seamounts episodically and either solidify or are drained into ridge-parallel faults before the next batch arrives.

NORTHEAST PACIFIC – High-resolution bathymetry and side-scan sonar data of the Vance, President Jackson and Taney near-ridge seamount chains in the northeast Pacific were collected with a hull-mounted 30 kHz sonar. The central volcanoes in each chain consist of truncated cone-shaped volcanoes with steep sides and nearly flat tops. Several areas are characterized by frequent small eruptions that result in disorganized volcanic regions with numerous small cones and volcanic ridges but no organized truncated conical structure. Several volcanoes are crosscut by ridge-parallel faults, showing that they formed within 30-40 km of the ridge axis where ridge-parallel faulting is still active. Magmas that built the volcanoes were probably transported through the crust along active ridge-parallel faults.

The volcanoes range in volume from 11 to 187 km3, and most have one or more multiple craters and calderas that modify their summits and flanks. The craters (<1km diameter) and calderas (>1km diameter) range from small pit-craters to large calderas over 8km across. Crosscutting relationships commonly show a sequence of calderas stepping toward the ridge axis. To form these calderas, the volcanoes must overlie crustal magma chambers at least as large as those under Kilauea and Mauna Loa Volcanoes in Hawaii, perhaps 4-5 km in diameter and ~1-3 km below the surface. The nearly flat tops of many of the volcanoes have remnants of centrally located summit shields, suggesting that their flat tops did not form from eruptions along circumferential ring faults but instead form by filling and overflowing of earlier large calderas. The lavas must retain their primitive character by residing in magma chambers for only short time periods prior to eruption. Stored magmas are withdrawn, probably as dikes intruded into the adjacent ocean crust along active ridge-parallel faults, triggering caldera collapse, or solidified before the next batch of magma is intruded into the volcano, probably 1000 to 10,000 years later.

The chains are oriented parallel to subaxial asthenospheric flow rather than absolute or relative plate motion vectors, and models yield rates of volcanic migration of 3.4, 3.3, and 5.9 cm/yr for the Vance, President Jackson, and Taney Seamounts, respectively. The modeled lifespans of the individual volcanoes in the three chains vary from 75 to 95 kyr. Magma supply rates differ from chain to chain, as expressed by the size of calderas, infilling of calderas, and formation of late cones on volcano summits and flanks.