Researchers from the Monterey Bay Aquarium Research Institute (MBARI) will present 21 different talks and posters at the American Geophysical Union Fall Meeting in San Francisco during the week of December 3 to 7, 2012. This page highlights a few of these presentations. A complete list of MBARI presentations is at the bottom of the page.

Mapping an entire mountain range in three weeks would be quite an achievement for a land-based geologist. It is even more of a challenge when the mountain range is 2,300 meters (7,500 feet) below the ocean surface. In this case, the mountain range is the 50-km-long (32-mile-long) Alarcón Rise–an active volcanic spreading center at the south end of the Gulf of California. During spring 2012, MBARI researchers used two different types of undersea robots to study the Alarcón Rise in unprecedented detail. First they mapped the entire ridge using an Autonomous Underwater Vehicle (AUV), documenting features as little as 20 cm tall. Then they used the remotely operated vehicle (ROV) Doc Ricketts to collect videos, chemical data, sediment cores, and over 100 rock samples from all along the rise. In the process, they discovered over 100 hydrothermal chimneys and dozens of previously unknown deep-sea vent communities. They also discovered an enigmatic underwater volcano whose “rhyolitic” lavas are more closely related to those of Mount Saint Helens than to typical mid-ocean ridge basalts. These and other findings of MBARI’s Alarcón Rise expedition will be described in five AGU presentations:

How methane hydrates effect the shape and stability of the seafloor

For over 20 years MBARI geologist Charles Paull has studied sites around the world where methane hydrate (an ice-like mixture of methane and water) lies buried within seafloor sediments or has turned into a gas and bubbled out into the overlying seawater. Recently Paull’s work on the distribution and stability of methane hydrates has taken on new urgency, due to the possible effects of hydrates on seafloor stability and on global climate change. In two AGU presentations, Paull will describe his recent discoveries in the Canadian Arctic and summarize the tell-tale signs of methane venting that he has observed around the world, some of which have baffled marine geologists for decades.

In June 2012, MBARI engineers programmed a newly developed autonomous underwater vehicle (AUV) to find and track an “upwelling front” (the landward edge of a plume of cold, nutrient-rich water) flowing across Monterey Bay. As the front moved and changed shape over time, the AUV moved with the front, automatically navigating a zigzag course to create an extremely detailed three-dimensional picture of the front over a four-day period. Upwelling fronts are biological hot spots, were marine organisms, from microscopic algae to blue whales, congregate in large numbers. Thus, understanding how these features evolve can provide new insights into everything from fisheries biology to harmful algal blooms. MBARI AUVs have also been programmed to automatically find, follow, and map algal blooms as they drift through coastal waters, even when these blooms are not visible at the sea surface. These achievements will be described in the AGU talk and poster listed below:

Oxygen minimum zones are naturally occurring layers within the ocean where oxygen concentrations are so low that many fish and other large animals cannot survive. For decades, oceanographers have known that these layers form where organic debris sinks down from the surface and is decomposed by marine bacteria, which also consume oxygen. Recent research has suggested that oxygen minimum zones have become thicker and more intense in the last few decades. However, the details of this process are not well understood. 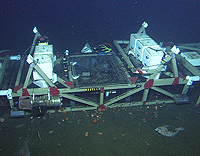 During 2011 and 2012, MBARI researchers conducted several experiments using the deep Free-Ocean Carbon Experiment (dpFOCE), the world’s only experiment to test the affects of ocean acidification on deep-sea animals in their native habitat. Over a 15-month period, custom-designed pH meters on the dpFOCE system measured minute-by-minute changes in the acidity of the surrounding seawater to within about 0.001 pH units. The data showed subtle and unexpected changes in seawater pH caused by tides, internal waves, and coastal upwelling. These findings will be described in an AGU poster by MBARI marine chemist Ed Peltzer.