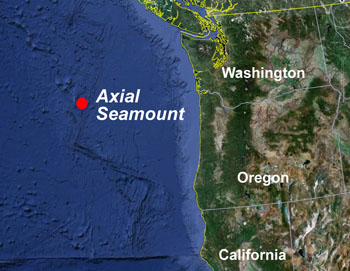 Map showing the location of Axial Seamount. Base map from Google maps.

Axial Seamount, 480 kilometers (300 miles) off the coast of northern Oregon, is one of the best-studied underwater volcanoes in the world. For 30 years, researchers have explored this volcano using submersibles and monitored its activity using pressure sensors, tilt meters, temperature probes, and seismometers (earthquake detectors). Now MBARI researchers have created the world’s most detailed map of an underwater lava flow, showing lava that erupted from Axial Seamount during April 2011. They describe this mapping effort and related geological discoveries in a recent paper in Nature Geoscience.

Axial Seamount last erupted in 1998. Between 2006 and 2009, MBARI researchers used a state-of-the-art robotic submersible, the D. Allan B., to map lava flows from this eruption at a horizontal resolution of about one meter (three feet). The D. Allan B. is an autonomous underwater vehicle (AUV) that is programmed at the surface and then “flies” as low as 50 meters above the bottom, mapping the seafloor using sound waves.

In late July 2011, a research team led by MBARI geologist David Clague was diving near Axial Seamount using the research vessel Western Flyer and the remotely operated vehicle (ROV) Doc Ricketts. At the same time, only a few miles away, a team from Oregon State University (OSU) was using the ROV Jason II to recover some instruments they had left on the seafloor. Both expeditions were encountering difficulties. The OSU team found that several of their instruments had disappeared. The MBARI team went to sample an old flow they had mapped previously, but couldn’t locate it. Shortly afterward, the OSU researchers concluded that a recent volcanic eruption had covered their instruments and large areas of the seafloor with fresh lava. They emailed the news to Clague. 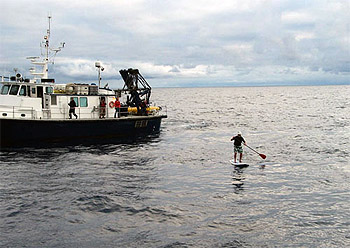 On August 3, 2011, MBARI seaman Perry Shoemake paddled his stand-up paddle board from MBARI’s research vessel Zephyr to the R/V Western Flyer. In his waterproof backpack was a hard drive containing 110 gigabytes of multibeam sonar data from MBARI’s seafloor-mapping AUV. This data had been compiled only three hours before, following an 18-hour AUV survey of Axial Seamount. The yellow mapping AUV can be seen in the background on the stern of the Zephyr. Image: © 2011 MBARI

Responding to this discovery, Clague worked closely with OSU expedition leader Bill Chadwick and with Dave Caress, MBARI’s seafloor-mapping expert (and lead author of the recent Nature Geoscience paper). Over the next few days, MBARI’s marine operations crew on the research vessel Zephyr scrambled to deploy the D. Allan B. to remap the parts of the volcano that the researchers thought the new lava flow might have covered. For the next two days, the AUV flew over most of the new lava flow, returning over 100 gigabytes of data. Within three hours of finishing the seafloor survey, the Zephyr crew and AUV team were ready to transfer the data to MBARI’s ROV host vessel, the Western Flyer.

Unfortunately, the AUV data files were too large to send by email, so the two MBARI research vessels met in mid-ocean to transfer the data “by hand.” The files were placed on a portable hard disk, which was then placed in a waterproof backpack. Perry Shoemake, a crew member from the Zephyr, then paddled his stand-up paddle board from the Zephyr to the Western Flyer to deliver the backpack. Clague later commented, “Considering that we moved more than 100 gigabytes in just a few minutes, I’d say we achieved an amazingly high data-transfer rate.”

With the AUV data in hand, MBARI technicians Jenny Paduan and Julie Martin worked into the night to create a new bathymetric map of the volcano. The resulting map was so detailed that they showed individual lava pillars, channels, fissures, and other small features created by the moving lava. This updated map made it much easier for scientists from MBARI, and later from the University of Washington, to navigate underwater and find geologic features of interest during subsequent ROV dives. 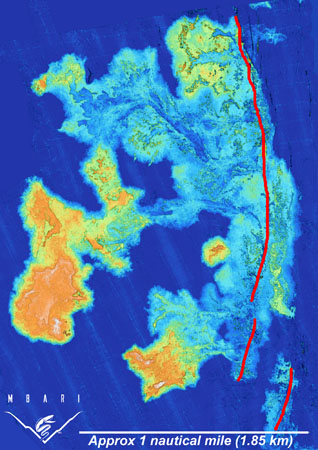 Map showing part of the 2011 lava flow at Axial Seamount. Thicker parts of the flow are shown in yellow and orange. Thinner parts are blues and greens. This image was created by calculating the differences in depths measured by MBARI’s seafloor-mapping AUV before and after the 2011 eruption. The red lines show the approximate locations of the fissures from which the lava erupted. Image: David Caress © 2012 MBARI.

The real excitement came when researchers calculated the differences in depths measured by the AUV before and after the 2011 eruption. This resulted a new map that clearly showed the thickness and boundaries of the new flow. After the cruise, Caress refined this “difference map” to show areas of fresh lava as little as 20 centimeters (8 inches) thick. The result was the world’s most detailed map showing an underwater lava flow.

Caress says, “The AUV maps allowed us, for the first time, to comprehensively map the thickness and extent of lava flows from a deep-ocean submarine eruption in high resolution. These new observations allowed us to unambiguously differentiate between old and new lava flows, locate the fissures from which these flows emerged, and identify fine-scale features formed as the lava flowed and cooled.”

In comparing the 1998 and 2011 flows, the MBARI researchers made another surprising discovery—the 2011 eruption issued from many of the same fissures and followed many of the same flow channels as did the 1998 eruption. Lava flows typically solidify and plug up the fissures from which they erupt. However, the 2011 flow not only originated from the same fissures as the 1998 eruption, but it excavated these fissures, making them wider and deeper. This is the first time such reoccupation, widening, and deepening of fissures has been observed in any volcano.

Similarly, the 2011 flow ponded in the same places and ran down the same trough-like channels as did the 1998 flow. Because the lava was relatively fluid, it did not solidify within these ponds and channels, but soon drained away and flowed farther downslope. In fact the thickest lava was found at the “distal” ends of the lava flow—the parts farthest from the eruptive fissures. These areas of lava, up to 17 meters (60 feet) thick, are shown in orange on the accompanying image. 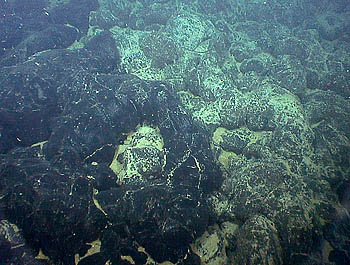 This image shows where the fresh, dark lava from the 2011 eruption at Axial Seamount flowed over lava from the 1998 eruption, which is coated with yellowish bacteria and debris. Researchers believe that in a few years, the 2011 flow will look very similar to the 1998 flow. Image: © 2011 MBARI

Much of this detailed information about the new flow would have been difficult or impossible to gather using ship-based sonar surveys or even ROV dives. Simply telling the difference between old and new lava flows is difficult underwater, because all the flows look pretty similar after a few years. The fact that the new flow covered many of the same areas as the 1998 flow compounds this problem. These findings suggest that previous studies based on fieldwork and mapping may have underestimated how frequently eruptions occur at Axial Volcano.

Clague notes, “This opportunity resulted from MBARI’s investment in 13 mapping-AUV missions on Axial Seamount from 2006 to 2009, both to study the previous eruption and in anticipation of the next eruption. As we extend our high-resolution coverage of volcanically active areas on the seafloor, studies like this will become important components of submarine volcanology.”

He adds, “When I started studying underwater volcanoes, I was jealous of my land-based colleagues, because they had such good topographic maps to work from. Now we have better maps of Axial Volcano than we do of most volcanoes on land.”