Blowing the lid off underwater volcanoes 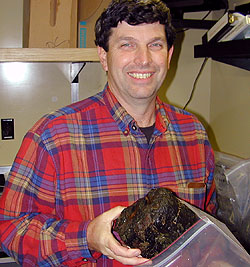 Nature rarely hands over her secrets without a fight. Solving our planet’s mysteries means doggedly following clues that may only reveal a small part of the story. A scrap of an idea tugs at a researcher’s pant leg and he or she follows it. “It’s not a linear thing. You’re kind of working a whole bunch of different things simultaneously and they weave together,” says David Clague, a geologist at MBARI. To complicate matters, sometimes researchers face obstacles that have nothing to do with the vagaries of nature.

For Clague, what started out as a simple research dive turned into a 12-year quest that overturned a long-held belief about deep-sea volcanoes. For decades scientists had regarded underwater volcanic eruptions along mid-ocean ridges as fairly civilized affairs—the crushing water pressures of the deep-sea and the low gas content of mid-ocean ridge magma meant these eruptions burbled gently rather than bursting in fiery explosions. But Clague suspected that these mannerly mountains in the deep had a wild side.

Clague’s curiosity was piqued during a research cruise in 1997 while studying Loihi, Hawaii’s youngest underwater volcano. A major event at Loihi in 1996 had spawned over 4,000 earthquakes and a couple of underwater eruptions. The following year, Clague dove down to see what the underwater volcano looked like, using a Pisces submersible from the Hawaii Undersea Research Laboratory. 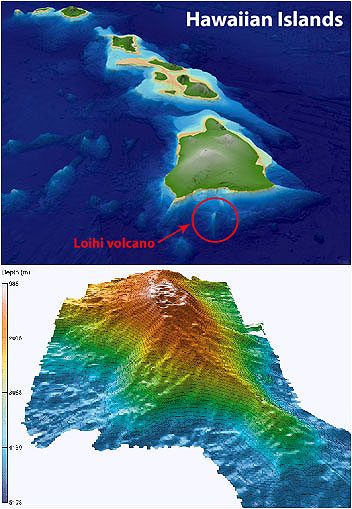 The top figure shows the location of Loihi volcano with respect to the Hawaiian island chain. The bottom figure is a 3D image of Loihi volcano. Images modified from the Hawaii Mapping Research Group and the Hawaii Undersea Research Laboratory at the University of Hawaii, Manoa.

“An explosive eruption basically produces a lot of little tiny particles,” says Clague. While the smaller dust-sized particles blow away on the currents, larger sand-sized pieces settle closer to home. When the Pisces submersible crested the lip of Loihi’s newly formed crater, Clague saw black sand rubble everywhere. “That was indicative of fairly abundant, or common, explosive activity on Loihi,” Clague says. “What we learned was that it’s actually a pretty common event there, and that Loihi is a quite explosive volcano.”

In working out how these eruptions could have happened, Clague found clues in tiny glass shards sprinkled throughout the black sand. They were brownish and slightly curved, like tiny pieces of seaweed. In fact their name, “limu o Pele,” means Pele’s seaweed (Pele is the Hawaiian goddess of volcanoes). These curved shards suggested that the limu o Pele were fragments of lava bubbles that had popped. Clague had seen similar fragments at the surface, where lava flowed directly into the ocean, but not 1,400 meters underwater.

On a shoreline, when magma from terrestrial volcanoes flows into the ocean, the seawater vaporizes into steam and percolates up through the still liquid lava, forming lava bubbles. When these lava bubbles contact air, the outer portion quenches, forming glass. If the steam inside continues to expand, the bubbles burst.

Clague explains that, after discovering bubble fragments underwater, “The only other materials that we had ever seen that had these bubble fragment shapes came from where lava entered the ocean and [the bubbles were] produced by steam. And so it was a fairly logical step, that steam [could form] at those depths, and so why not use the same mechanism that we knew existed right at sea level?” 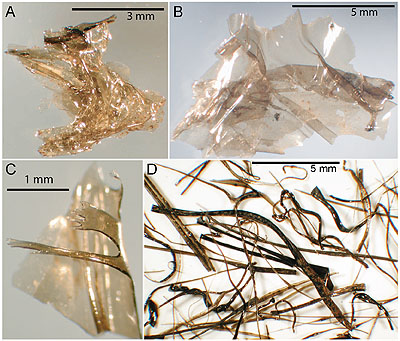 But some lava rocks from Loihi contained lots of bubbles trapped inside. This suggested that the magma contained volcanic gasses such as carbon dioxide. Like the fizz in a soda can, carbon dioxide can form bubbles in lava. These bubbles shatter after quenching and produce fragments of volcanic glass.

So Clague was faced with two possible ways limu o Pele could have formed on Loihi. It seemed logical to think steam was the culprit, but the bubble-infused rocks kept him from closing the case. “I had a nagging thought that maybe it really was magmatic [gas],” Clague says.

It took Clague a couple of years to coordinate the ship time and funding necessary to collect data that would show once and for all whether limu o Pele in the deep-sea was formed by steam or by magmatic gas. In 2000, he finally headed out to sea to test his idea, examining rocks along mid-ocean-ridge volcanoes below 3,000 meters. At these depths, enormous pressure keeps the super-heated water in a liquid state, so steam cannot form.

“I did some dives much deeper, below 3,000 meters, specifically expecting not to find these deposits there, but surprise!” says Clague with a laugh. He found glass bubble fragments everywhere. He knew that these bubbles must have been formed by magmatic gas. 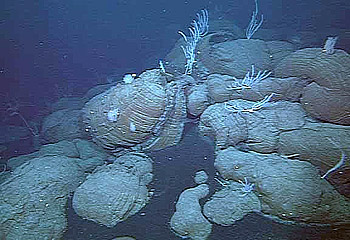 But even this new hypothesis was controversial. At that time, most geologists believed that lava from mid-ocean ridge volcanoes contained very little magmatic gas.

So Clague started looking at other deep-sea volcanoes to see if he could find glass bubble fragments. “We found [limu o Pele] again and again and again. Over 500 times actually, we found it.” At that point, he remembers thinking “Oh, this is important. We’ve got something really good here.”

Clague knew that his discovery had broader implications. Not only did magma on mid-ocean ridges contain more gas than previously thought, but supposedly mild-mannered volcanoes, such as the ones on mid-ocean ridges, could erupt energetically.

Convincing his colleagues of this proved to be much more of a challenge. Part of the reason Clague spent over a decade on this project was because at first, no one believed him. “Most of the people who worked on ocean ridges for the last 40 years have ‘known’ that they were very passively erupted,” he says. “It’s been very hard to convince people because it goes against what they ‘know.’ Scientists are conservative. They don’t rush off in a new direction easily. You usually need a lot of evidence, and people have to kind of adjust to a new reality.” 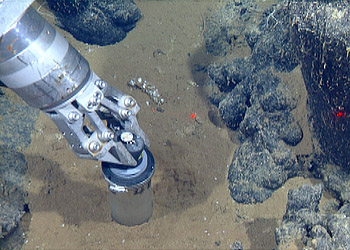 MBARI’s David Clague used push cores, like the one above, to collect sediment that he could analyze for limu o Pele fragments. Image © 2009 MBARI

Clague points out that one reason other researchers had missed evidence of explosive eruptions was because of the kinds of research equipment they used. “Most people who study underwater volcanoes go out with either a dredge haul or with a manipulator on an [underwater] vehicle,” says Clague. Both tools are great for picking up rocks larger than a golf ball. But the glass shards he was looking for were no bigger than a fingernail. “When we go down with an [underwater] vehicle we put different tools on it. It’s nothing fancy. It’s just different than what people usually use along [deep-sea] ridges,” he says.

Clague used push cores (hollow tubes pushed into the seafloor and then removed) on MBARI’s remotely operated vehicle (ROV) to collect sediment samples. Researchers then sieved these sediment samples to separate out the tiny glass shards. Clague also used the ROV’s “suction sampler” like an underwater vacuum cleaner to suck up loose material, including tiny glass fragments. Clague felt he needed to gather as much physical evidence as possible before he could change the minds of his fellow volcanologists.

In the long run, there were only so many cruises Clague could schedule using MBARI ships. So he tried to get his colleagues to pick up samples for him when they went on their own research expeditions. “A lot of my colleagues just thought I was nuts,” says Clague. “They were completely skeptical. This stuff just didn’t exist.” But after inviting fellow researchers out on his cruises and showing them the physical evidence, Clague found that even the skeptics were willing to collect samples for him.

Clague first published his findings on explosive deep-sea volcanic eruptions in 2003, but they were largely ignored. As early as the 1970s, French chemists had proposed similar mechanisms for explosive underwater eruptions. Their papers were similarly ignored. “For reasons I’ve never really understood, nobody paid much attention to it,” muses Clague. “It went against everyone’s intuition.” 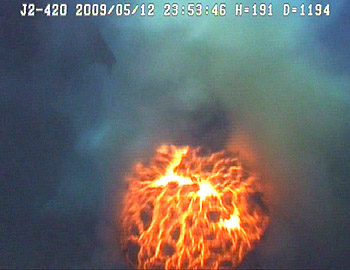 An underwater eruption in progress on West Mata volcano in the Lau Basin, southwest of American Samoa. MBARI geologist David Clague caught this volcano in the act, using the remotely operated vehicle JASON 2 in May 2009. Image courtesy of Joe Resing/NOAA/NSF

It wasn’t until 2009, when a research team led by Robert Sohn of the Woods Hole Oceanographic Institute published similar findings in the high-profile journal Nature, that geologists finally began to accept that deep-sea volcanoes could erupt energetically. Consensus had been building since Clague published his initial findings in 2003. But Sohn’s paper was the clincher that solidified this new view of underwater eruptions.

It also helped that scientists began catching deep-sea volcanoes in the act at several locations around the Pacific. During one dive, Clague and his colleagues actually videotaped fragments of lava spewing out of an active deep-sea volcano.

Most of Clague’s colleagues now accept that deep-sea volcanoes can erupt explosively, and that magmatic gas causes these explosions.

Looking back, Clague is philosophical about his decade-long quest. “It’s this winding pathway. And eventually you get to some interesting places and do some really interesting things,” he says. “There are so many stops and starts and twists and turns along the way. And a lot of it just has to do with keeping your eyes open so that you see things.”

Ultimately, Clague doesn’t mind that it took more than 10 years to convince his colleagues that deep-sea volcanoes could erupt explosively. “I viewed it as a challenge to convince them,” he says. “I like challenges.”