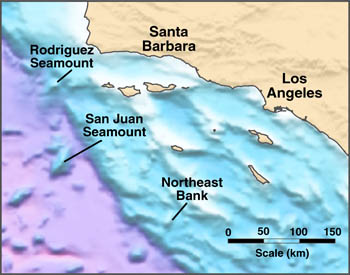 Area map showing the locations of the three seamounts that appear to have been volcanic islands between 10 and 14 million years ago. Image credit: (c) 2004 MBARI

Using MBARI’s research vessel Western Flyer and remotely operated vehicle (ROV) Tiburon, MBARI researchers, led by volcanologist David Clague, collected video images and rock samples during expeditions to seamounts off Southern California in October 2003 and April 2004. The eleven Tiburon dives provided the first-ever video observations of Rodriguez Seamount, San Juan Seamount, and Northeast Bank, undersea volcanoes about 300 kilometers west of Los Angeles. Prior to the MBARI expeditions, only a handful of rock samples had been dredged from these sites in the late 1960’s to mid-1980’s. Some of the seamounts, like San Juan Seamount, had never been sampled before.

Clague’s research team, including technician Jennifer Paduan, first author of the AGU poster, were surprised to find apparent beach features more than 500 meters below the sea surface. As shown in the accompanying photographs, ROV Tiburon recorded images of beach sands and wave-sculpted lava from Rodriguez Seamount at 680 meters depth. Such deposits are too deep to have formed during low sea levels caused by glacial events. These features were observed on Rodriguez Seamount, San Juan Seamount, and Northeast Bank, but not on Central California seamounts that Clague has been studying since the late 1990’s, or on deeper Southern California seamounts that the team investigated during their recent expeditions. 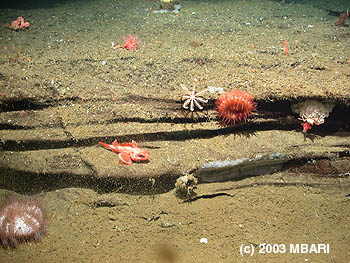 This photograph was taken by MBARI’s Remotely Operated Vehicle (ROV) Tiburon about 680 meters below the surface at Rodriguez Seamount. The layered rocks are hypothesized to be ancient beach sands from a time when this seamount was a volcanic island off the coast of Southern California. This photograph also shows a few of the deep-water marine animals that inhabit the slopes of these seamounts. Image credit: (c) 2003 MBARI

The team collected many rock samples from the seamounts. Later chemical and mineralogical analyses of these samples in the laboratory suggested that the rocks had been exposed to air, as would be expected if the volcano had erupted above water.

Video and still images of the seamounts also revealed rich communities of deep-sea animals, including large deep-sea corals and sponges. Seamounts are believed to be biological hotspots and are of growing interest to researchers worldwide. Future explorations using deep-diving vehicles and improved seafloor mapping will no doubt reveal new information about these prominent but little-known seafloor features. 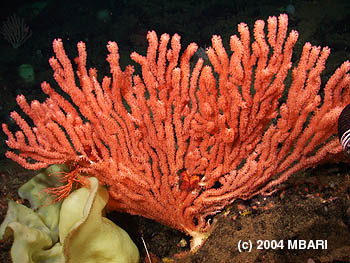 The large cold-water corals found on many seamounts grow very slowly and if undisturbed, may live for hundreds of years. Image credit: (c) 2004 MBARI 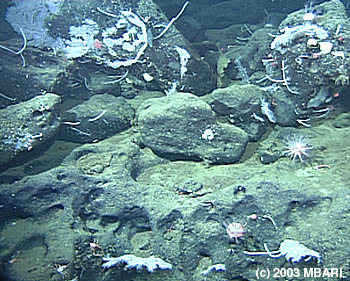 When MBARI researchers dove on Rodriguez Seamount they were surprised to see rocks such as these, which appear to have been sculpted by wave action, but are currently 635 meters below the sea surface (far below the reach of the largest storm waves). 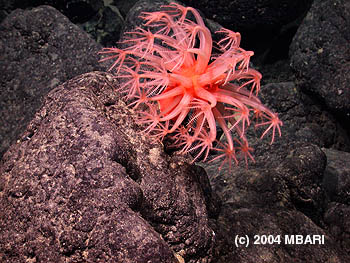 Like many organisms living on seamounts, this “mushroom coral” captures minute food particles that drift past on the ocean currents. 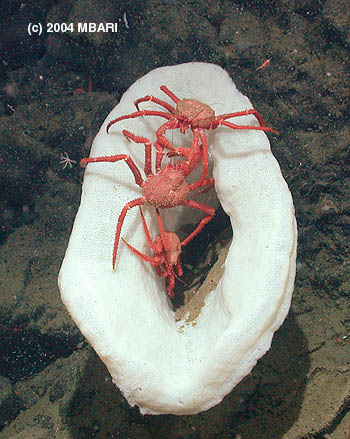 Large deep-water sponges often provide sanctuaries for many smaller animals such as these three crabs.