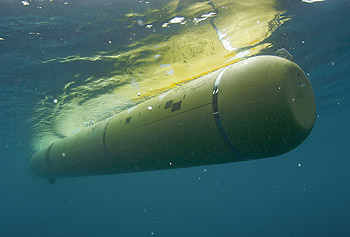 SAN FRANCISCO—MBARI’s seafloor mapping robot has had a busy year. It documented a huge lava flow from a three-month-old volcanic eruption off the Oregon coast; it charted mysterious three-kilometer-wide scour marks on the seafloor off Northern California; and it unearthed data that challenge existing theories about one of the largest offshore faults in Central California. MBARI researchers will describe these achievements, and others, in 10 different presentations at this week’s meeting of the American Geophysical Union in San Francisco.

Technically speaking, this yellow, torpedo-like robot is known as an autonomous underwater vehicle (AUV). It is programmed at the surface, then released to fly within 50 meters (165 feet) of the seafloor, using sonar to map ocean-bottom features as little as 15 centimeters (five inches) tall. MBARI’s mapping AUV, the D. Allan B., carries three different types of sonar, which simultaneously provide information on seafloor depth, bottom texture, and sub-bottom features such as layers of buried sediment. 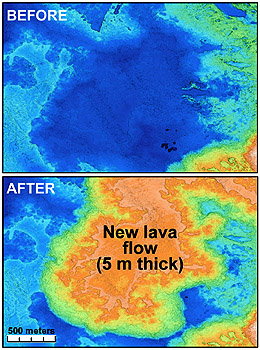 Portion of bathymetric maps showing Axial Seamount before and after the recent eruption. Image © 2011 MBARI

Last summer the mapping AUV helped make geologic history. In July and August 2011, two research teams from MBARI and Oregon State University (OSU) were using remotely operated vehicles (ROVs) to study Axial Seamount, an active volcano about 270 kilometers (170 miles) off the Oregon coast. The OSU team discovered that several instruments, placed on the seafloor during previous expeditions, had disappeared. Similarly, the MBARI team couldn’t figure out why the seafloor looked very different from previous dives. After comparing notes, they realized that a recent volcanic eruption had covered large areas of the seafloor with up to three meters of fresh lava.

MBARI’s marine operations crew scrambled to deploy the D. Allan B. In two days, the AUV had created a new bathymetric map that depicted the 10-million-square-meter flow with an astonishing one meter of horizontal resolution and 20 centimeters (eight inches) of vertical resolution. The map showed not only the exact boundaries of the new flow, but also lava pillars, individual lava pillows, and other small flow features.

By painstakingly comparing the new map with an older map created by the mapping AUV, the MBARI team was able to get a precise estimate of the amount of lava released during the recent eruption. They also discovered that the new eruption reoccupied many of the same fissures and followed a flow pattern that basically mimicked the existing flows—information that would have been impossible to gather through ROV dives or sonar surveys using surface ships. Needless to say, the new map also made it much easier for scientists to navigate and find geologic features of interest during subsequent ROV dives.

In addition to creating the world’s most detailed map of an underwater lava flow, the D. Allan B. provided data that led to a number of other exciting geologic discoveries: 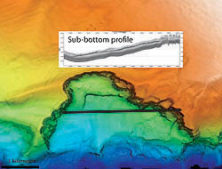 Presentations at the Fall 2011 AGU meeting that feature data from MBARI’s mapping AUV: