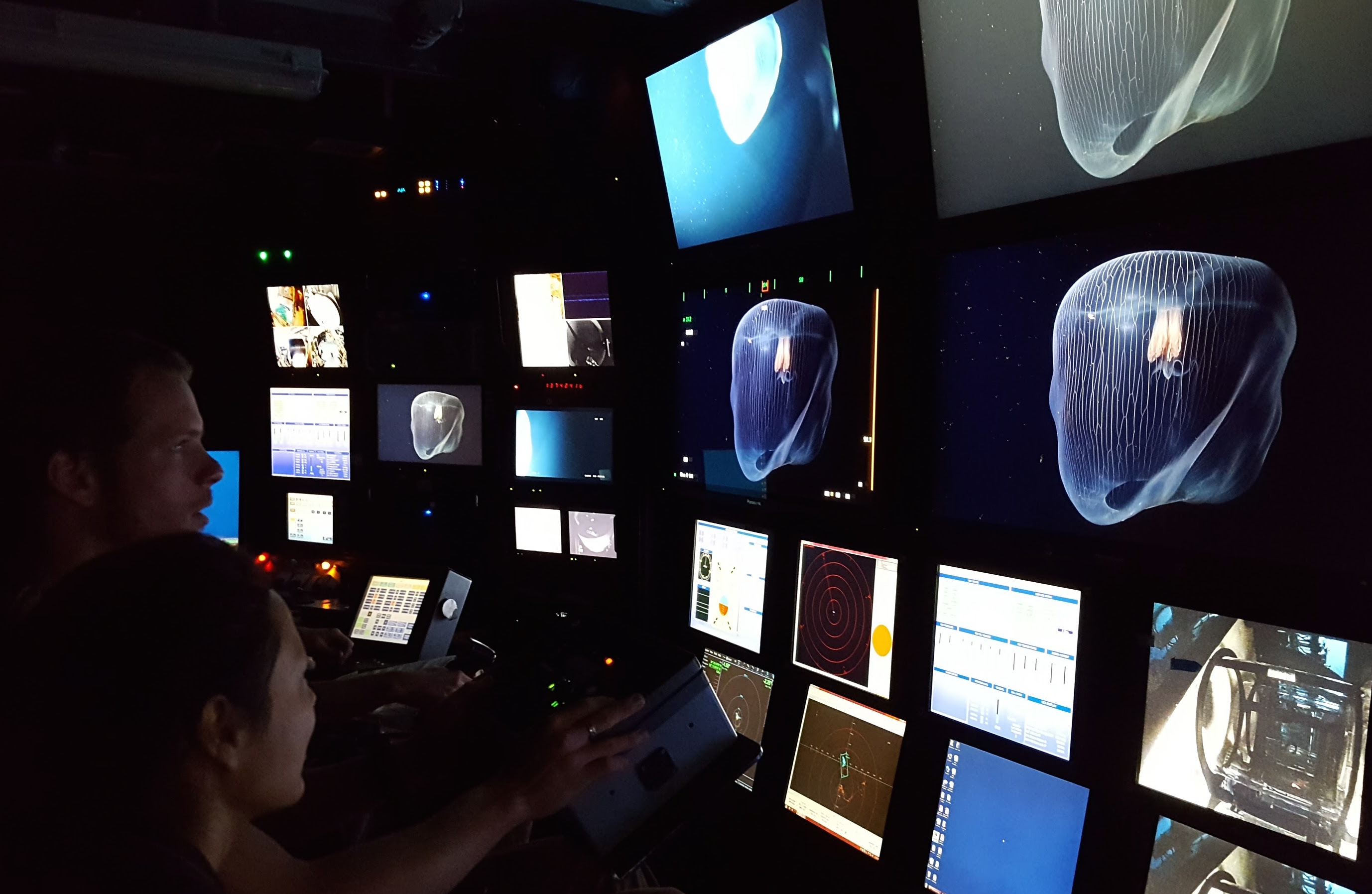 Observing the midwater medusa Deepstaria enigmatica in the control room aboard the R/V Western Flyer.

This research cruise is the first expedition of the Bioinspiration Lab on the R/V Western Flyer to study midwater organisms for bioinspired engineering design. The goal of this expedition is to understand how deep midwater organisms survive in a turbulent and changing fluid environment, and how fluid interactions impact their ecology, swimming ability, and behavior.

The Bioinspiration Lab, led by Kakani Katija, has developed DeepPIV (deep particle image velocimetry), a laser-based instrument that can measure fluid motion over space and time. We will use DeepPIV to study mucus-house-building larvaceans, agile tomopterid worms, giant prayiid siphonophores, ctenophores, fishes, squids, and many other common inhabitants of the ocean twilight zone. The DeepPIV can be mounted on the ROV Doc Ricketts to study deep-living animals (200 to 4,000 meters) and has been deployed from MiniROV, a flyaway remotely operated vehicle system that is optimized for working in the upper water column.

On this expedition, we will also test MiniROV’s new “Smart Clump”. The Smart Clump is a weighted instrument attached to the ROV tether 50 meters from the vehicle. The Smart Clump has a camera and sensors that will give an overhead perspective of the ROV, which will make ROV operations safer and more effective.

We are excited to take our first official expedition on the R/V Western Flyer since our lab formed in 2017!

What is DeepPIV? You may have asked yourself this question as you’ve read our expedition posts. DeepPIV is an instrument that we are using extensively during our ROV dives, and it was developed and built at MBARI. DeepPIV allows us to measure fluid motion in the deep sea in unprecedented detail. It is based on a common technique used in engineering laboratories—Particle Image Velocimetry (more about PIV) We first started developing DeepPIV in 2015, and we have now deployed it more than 80 times.

DeepPIV has a camera that captures the motion of particles, flow, and animals that cross through a laser sheet. Since DeepPIV is attached to ROV Doc Ricketts via a manipulator arm, we can study a vast array of problems and science questions from the sea surface to 4,000 meters (13,000 feet) or anywhere the ROV goes! So far, we’ve used it to study giant larvaceans (see video below) and we’re looking forward to studying an array of animals in the ocean twilight zone.

On this expedition we are using two different remotely operated vehicles (ROV). The main one, ROV Doc Ricketts, is always deployed from R/V Western Flyer, while the smaller one, MiniROV is what we call a “flyaway” vehicle because it can be launched from any research vessel anywhere in the world. We can ship the vehicle and its control van (a large shipping container with an ROV control room inside) to any port and load it on another research vessel. However, since the R/V Western Flyer lives in the harbor right across the street from MBARI, the crew and pilots just had to forklift it over to the dock and set it in place on the ship’s back deck.

The reason we are using both vehicles on this expedition is that the ROV Doc Ricketts is optimized for deepwater work, allowing researchers to observe and sample animals that live in the deep midwater. It can descend all the way to 4,000 meters, however, it is not as maneuverable in shallow water (above 200 meters). That’s where the MiniROV comes in handy! The MiniROV can dive as deep as 1,500 meters, but most importantly for this expedition, it can easily fly between 50 and 200 meters, the depth range of one of our target species—the giant larvacean Bathochordaeus mcnutti.

On this expedition, the MiniROV team used a new “smart clump”. The smart clump is a weighted instrument attached to the umbilical cable of the vehicle and floats about 50 meters away. The smart clump has multiple cameras and sensors which will make ROV operations safer and more efficient, by giving the pilots better visualization of tether management. This was the first time they used the Smart Clump, and using it involved one more step in the deployment process. First, the ROV pilots and crew deployed the MiniROV, then they attached the clump to the crane and deployed it. We can happily report that the smart clump and MiniROV successfully worked in the shallow midwater over the last few days, allowing us to sample animals a little too deep for scuba diving and a little too shallow for our deep-diving ROV Doc Ricketts.

How do we catch black fish?

Three members of the team (Sonke Johnsen, Katie Thomas, and Karen Osborn) are working on figuring out how deep-sea fish make themselves super black to disappear into their dark surroundings. While many deep-sea animals can be collected in beautifully pristine condition with ROVs, fish are fast swimmers and can generally avoid the ROV altogether. If we even see these fish during a dive, they can easily escape when we try to capture them.

Instead, we turn to a method that has been used since the first deep-sea expeditions: trawling. This involves dragging a net deep in the water behind the ship and pulling up everything that gets caught in it. The net we are using is small compared to some, but still is too heavy to lift without a winch and takes a team of people to deploy and recover.

Black fish are frequent components of our hauls from 1,000 to 600 meters depth, along with crustaceans, juvenile cephalopods, ostracods, pteropods, jellies, siphonophores, and many other spectacular creatures. We can target certain species by trawling at the depths they normally occupy, but we never know what we will catch in the net until it comes up, which makes every trawl an adventure! 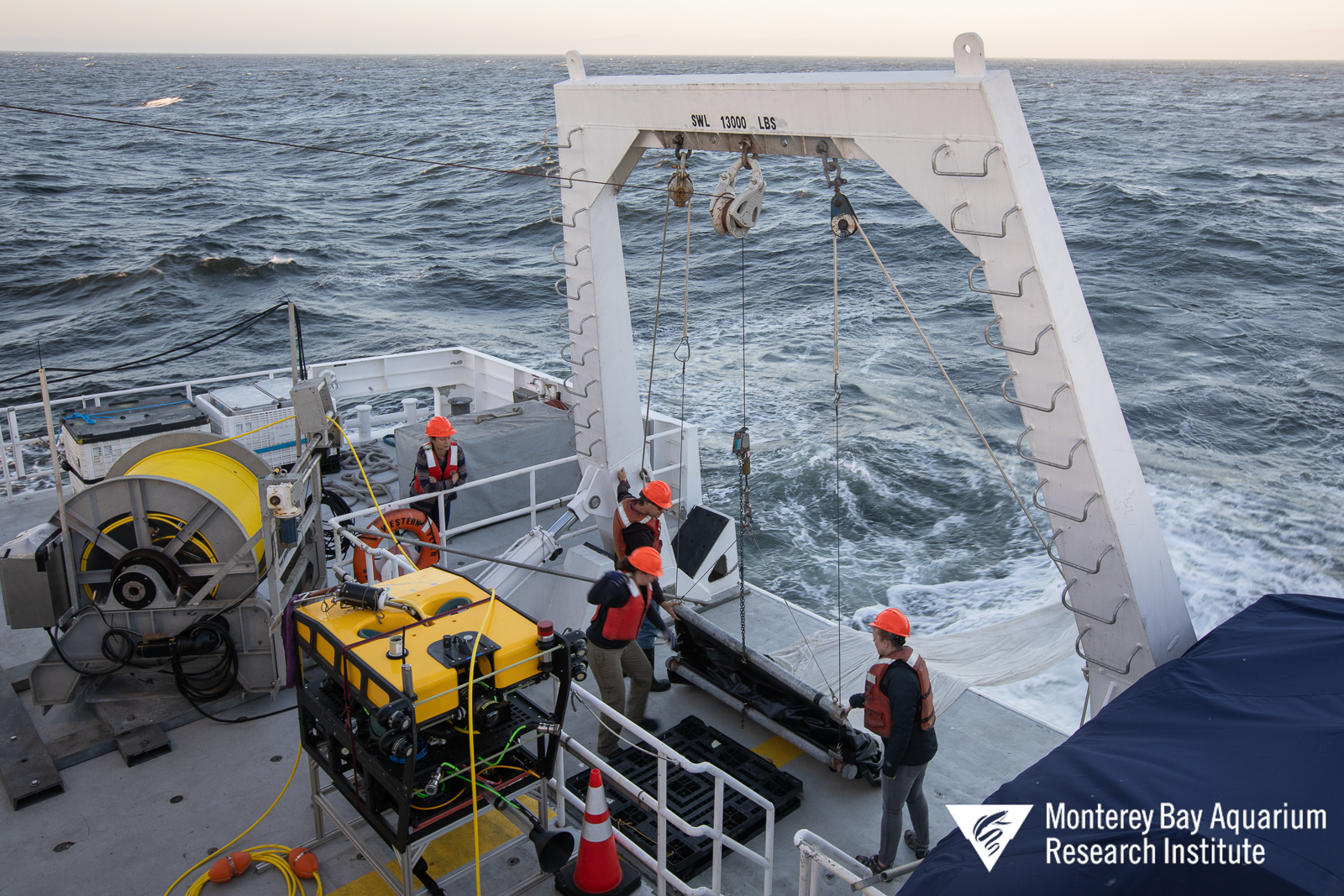 Deploying a trawl net from the aft deck of the R/V Western Flyer.

Art and science go hand in hand, and the animals of the deep sea are particularly inspiring to both worlds. I still remember the excitement I felt when I saw the paintings from the very first trip humans took into the deep ocean—not only because because they opened so many questions about how these creatures lived, but also because, in their own way, the animals were beautiful. So maybe it’s no surprise that one of the projects on this cruise grew out of an artistic difficulty. Both Karen Osborn and I, longtime friends and sharers of many cruises, love to take pictures of the animals we collect. We do it for research, for conservation, but also just because the animals are amazing to look at. Over the years, we’ve gotten better, but one group of animals always frustrated us: the black fish.

When you go deep enough in the ocean, more than about 400 meters down, it becomes so dark that many animals use flashlights (grown right under and over their eyes) to look for prey. This means that, in order not to be found, the prey animals have to be as black as possible. Some get away with being red, because the flashlights are blue, and red reflects almost no blue light, but the fish are nearly always black. Saying these fish are black though is like saying the sun is hot. The blackness is inky perfection, rivaling that of the darkest substances ever made. The darkest fish look like holes in the universe, which makes them next to impossible to photograph well (it turns out that holes in the universe aren’t terribly photogenic). Karen and I, separately and together, tried many ways over the years to get a good image and failed. So, as scientists often do, we turned our failure into a question. How black are they, and how do they do it?

So we’re out here, collecting these extraordinary animals, measuring their blackness, and combining this information with what we’ve learned about their skin to understand how they do this. This likely will end up being useful to engineers who design cameras and other optical instruments that need black insides, but for Karen and I this project also satisfies an itch and a desire to make something of an artistic failure. I can’t remember who said this, but it’s so true: great moments in science don’t usually start with “Eureka!”, but instead with “That’s funny…”

My name is Joost, and I am a research engineering technician in MBARI’s Bioinspiration Lab. This is my first cruise on the Western Flyer, and in the coming days I hope to share with you some of my amazement and excitement about this expedition.

Having the biggest ship in the harbor can be both a blessing and a curse. At the start of our cruise today, the Western Flyer took off during high tide to avoid getting stuck in the harbor on the way out. With engines churning the mucky water, we successfully passed through the Moss Landing Harbor and out to Monterey Bay. The ship is big enough to be fully self-supported, with a crew of almost 30 people for the next five days. On top of that, we carry along an incredible set of engineering and science tools. We have lasers, high-speed cameras, (two!) remotely operated vehicles (ROVs), and advanced nets, all with dedicated computers, cranes, and an ROV control room.

More details on how we are using these high-tech tools for oceanographic research on our Bioinspiration Cruise will follow in the next few days. Stay tuned!

What are we going to study in the ocean twilight zone?

The Bioinspiration Lab and collaborators will be conducting ROV dives, DeepPIV measurements, trawls, animal collections, laboratory measurements of animal biomechanics, and measurements of optical properties of various tissues and materials to answer one question: What secrets do animals in the ocean twilight zone possess that, when revealed, could be used for bioinspired engineering design?

One particular group of organisms we hope to study are larvaceans. Monterey Bay is home to giant larvaceans, and you can learn more about them in the YouTube video below. Larvaceans build and live inside complex structures made out of mucus, and we refer to them as houses. Yes, these houses are made out of mucus! The mucus house is used by the larvacean to filter and concentrate food from the water around them. Each larvacean species has a different mucus house structure and is built by cells on the animal’s head that secrete mucus.

How do larvaceans build their houses? How often do they do this? How is the structure of mucus houses linked to function?

Recent findings have shown that larvacean mucus houses are self-cleaning filters and that giant larvaceans in Monterey Bay can collectively filter 500 Olympic-sized swimming pools in an hour! Could these mucus houses inspire filtration technologies that can filter the oceans of contaminants like microplastics? We hope to find out using a suite of tools and instruments on the ROVs and in the ship-based laboratory during the research expedition. 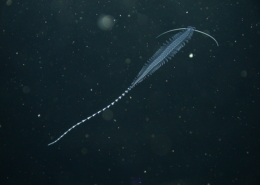 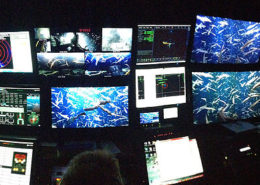 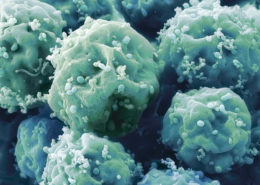 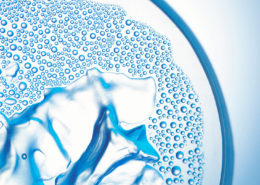