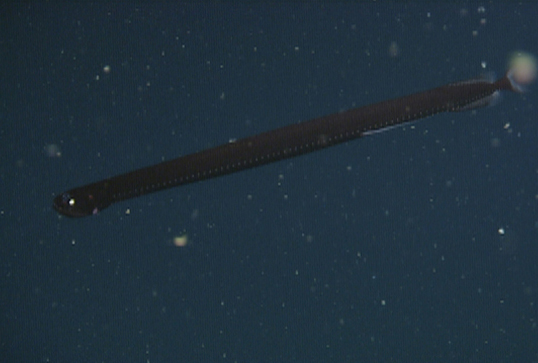 Art and science go hand in hand, and the animals of the deep sea are particularly inspiring to both worlds. I still remember the excitement I felt when I saw the paintings from the very first trip humans took into the deep ocean—not only because because they opened so many questions about how these creatures lived, but also because, in their own way, the animals were beautiful. So maybe it’s no surprise that one of the projects on this cruise grew out of an artistic difficulty. Both Karen Osborn and I, longtime friends and sharers of many cruises, love to take pictures of the animals we collect. We do it for research, for conservation, but also just because the animals are amazing to look at. Over the years, we’ve gotten better, but one group of animals always frustrated us: the black fish.

When you go deep enough in the ocean, more than about 400 meters down, it becomes so dark that many animals use flashlights (grown right under and over their eyes) to look for prey. This means that, in order not to be found, the prey animals have to be as black as possible. Some get away with being red, because the flashlights are blue, and red reflects almost no blue light, but the fish are nearly always black. Saying these fish are black though is like saying the sun is hot. The blackness is inky perfection, rivaling that of the darkest substances ever made. The darkest fish look like holes in the universe, which makes them next to impossible to photograph well (it turns out that holes in the universe aren’t terribly photogenic). Karen and I, separately and together, tried many ways over the years to get a good image and failed. So, as scientists often do, we turned our failure into a question. How black are they, and how do they do it?

So we’re out here, collecting these extraordinary animals, measuring their blackness, and combining this information with what we’ve learned about their skin to understand how they do this. This likely will end up being useful to engineers who design cameras and other optical instruments that need black insides, but for Karen and I this project also satisfies an itch and a desire to make something of an artistic failure. I can’t remember who said this, but it’s so true: great moments in science don’t usually start with “Eureka!”, but instead with “That’s funny…”

June 21-26, 2018 – This research cruise is the first expedition of the Bioinspiration Lab on the R/V Western Flyer to study midwater organisms for bioinspired engineering design.