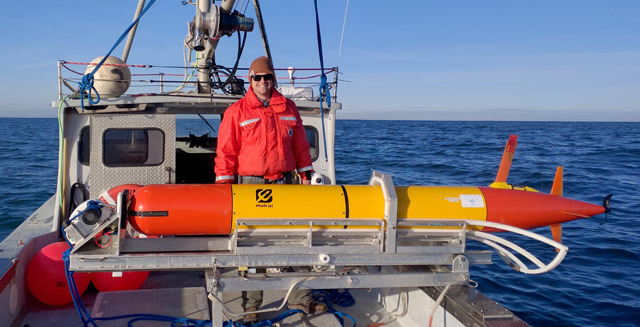 Each night, while cities sleep and children dream, the ocean comes alive. Billions of critters make their way toward the ocean surface in search of food, counting on the cover of darkness to keep them safe from hungry predators. This daily commute by tiny animals such as copepods, krill, and fish is known as diurnal vertical migration. It is the largest migration on Earth.

“It’s an enormous movement on their scale. If you scaled it to a human that’d be like running a 10K to get your dinner and then a 10K before you went to bed, and doing it at twice the speed of an Olympic marathon runner,” said Senior Scientist Kelly Benoit-Bird from MBARI.

This sonar image shows how layers of small marine animals (yellow bands) spend daytime in deeper water but migrate up toward the surface at night. Image: NOAA/BOEM

This mass migration of animals feeds the rest of the food chain by providing meals for marine mammals, seabirds, and commercially important fish. Studying the abundance and behavior of these commuters could help humans better manage marine resources that are increasingly under threat as a result of fishing pressure and rising ocean temperatures.

“Since we’re in this environment of change, we need to figure out how things are changing, and how fast and who’s where,” said Katie Pitz, a biological oceanographer and CANON project manager.

Modern technology is giving marine scientists new ways of looking at this global phenomenon—which is invisible to most of us. MBARI researchers are embarking on a week-long voyage to uncover the mysteries of this migration in a Controlled, Agile, and Novel Observing Network (CANON) experiment, which began on May 29th. MBARI researchers and their collaborators will examine this daily trek using an assortment of conventional and cutting-edge technologies.

This year’s CANON experiment will use underwater robots to examine these migrating animals during their sprint to the surface. Researchers will sample the nightly migration using sound, video, and DNA, in addition to conventional sampling equipment such as nets. They plan to sample around the clock to catch dawn and dusk migrations. By coordinating sampling techniques and analyzing the resulting mountain of data, researchers will get a better picture of how organisms adapt to changing ocean conditions. 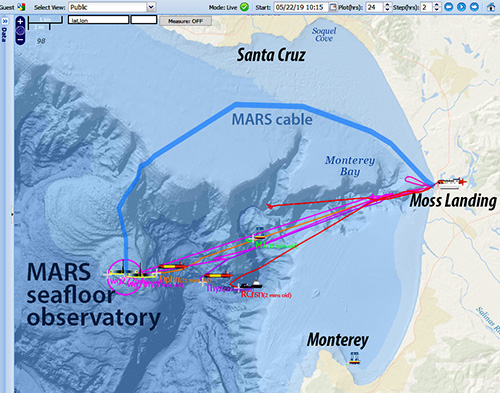 During the spring 2019 CANON experiment, a small fleet of ships and robots will congregate around the MARS Observatory, about 37 kilometers offshore of Moss Landing. This illustration shows the location of the observatory, as well as several robots circling and heading out to this area. Image: MBARI

A small fleet of ships, robots, and instruments will be deployed 37 kilometers (23 miles) offshore of Moss Landing, California, at the Monterey Accelerated Research System (MARS) site. MARS is a deep-sea observatory that provides electrical power and a data connection to instruments on the seafloor, 900 meters (over a half a mile) below the surface.

“We’re picking a site where we have all the available technology in one place,” said Senior Scientist Francisco Chavez, who has led the CANON initiative since it began in 2010.

As the sampling instruments dance around one another within a few kilometers of the MARS site, researchers will get a better idea of what kinds of organisms live at different depths at different times of day. Studying deep-sea food webs and migrations, “is another way of getting at life in the sea,” Chavez said.

In addition to the three ships involved in the expedition, scientists will use over half a dozen robots, both on the surface and underwater, to collect data and capture video.

Researchers will use acoustic monitoring devices such as the Deep Echo-Integrating Marine Observatory System (DEIMOS) echosounder on the MARS observatory to uncover how many organisms are present and at what depths. Scientists will also deploy a handful of underwater robots carrying video cameras to provide firsthand observations of the animals in action. 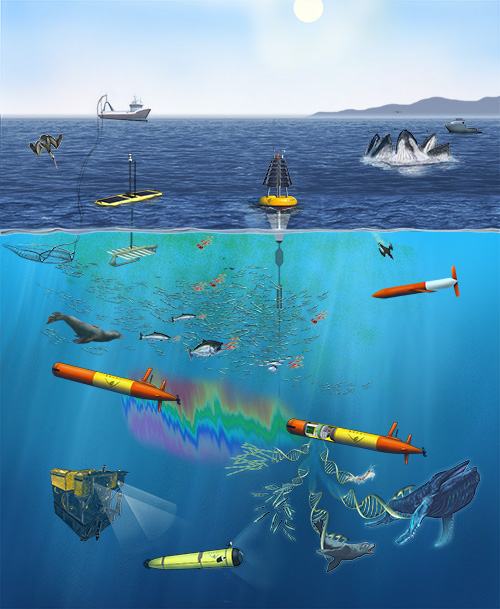 This illustration shows some of the technologies being used during the CANON experiment, including MBARI’s long-range autonomous underwater vehicles and environmental DNA. Image: Kelly Lance © 2017 MBARI

On top of these technologies researchers will collect environmental DNA (eDNA) samples at the most interesting depths to see if the different types of technologies are telling similar stories. Environmental DNA is a relative newcomer to the sampling scene and may prove to be a less-invasive and more time-efficient method for studying life in the ocean. By taking water samples and filtering out leftover genetic materials such as skin cells or fecal matter, scientists can discover which organisms live where.

“We’re like forensic scientists looking to see who the suspects are out there in the ocean,” said Chavez.

MBARI researchers working alongside NOAA scientists and industry experts will also deploy traditional sampling methods along with modern technology. “We want to understand how to best combine these technologies so that the sum is greater than what you could get from any one thing,” said Pitz.

“We have the ability to use these advances in biological technology to get a holistic, richer picture of the status of the ecosystem and all the species that make up the food web,” said Kelly Goodwin, a scientist from the National Oceanic and Atmospheric Administration’s (NOAA) Atlantic Oceanographic and Meteorological Laboratory.

Goodwin has been conducting joint operations with MBARI for the last three years to test whether autonomous vehicles collecting eDNA can be as effective as traditional ship sampling methods. “The problem is that traditional sampling is expensive and time consuming,” said Goodwin.

MBARI has developed an autonomous instrument that can collect and preserve water for eDNA analysis. This device, the Environmental Sample Processor, can filter and preserve dozens of water samples. “It’s basically a laboratory in a can,” said Chavez. 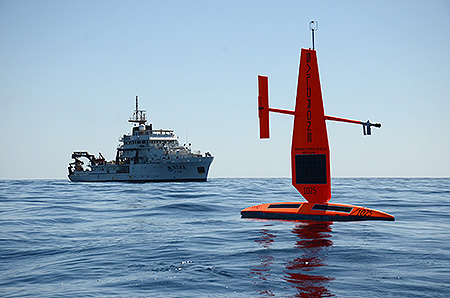 In addition to using MBARI’s ships and robots, the 2019 CANON experiment will incorporate data from a Saildrone surface robot (right) and from researchers on board the NOAA research vessel Reuben Lasker (left). Image: NOAA

In order to sample the ocean at depth, MBARI researchers also developed long-range autonomous underwater vehicles (LRAUVs) which can stay at sea for weeks at a time and use less energy than traditional AUVs. For this experiment, two LRAUVs will be equipped with Environmental Sample Processors.

The most recent group to join the CANON experiment is Saildrone, an industry collaborator. Saildrone will deploy a wind-driven surface robot carrying an echosounder that will show researchers the distribution of animals in the water. This technology is critical; Saildrone’s surface-going robots are quicker than other robotic vehicles and can map animals over large areas. “They can move quite fast and cover a lot of ground,” Pitz said.

By comparing data collected by MBARI, NOAA, and Saildrone, researchers can look for overlap between what they find in the net and water samples with what they see using video and acoustic monitoring devices. The hope is to find faster, better, and less-expensive ways to describe the environment.

With humans increasingly reliant on the ocean for food and energy, integrating technologies through institutional collaboration presents researchers with a rare opportunity to understand the life cycles and behavior of ecologically important and commercially valuable organisms. “One important application of this work is to make sure that fisheries remain sustainable,” Goodwin said.

“For most people the ocean is out of sight, out of mind. However, the ocean provides key services that keep the world the way we know it.” Chavez said. “We need to try to understand how healthy it is and how it’s changing because it will help us predict things going into the future.”

May 29, 2019 – During MBARI's Spring 2019 CANON experiment, researchers will study the vertical migration of ocean animals using sound, video, DNA, and conventional sampling equipment such as nets.
November 20, 2018 – Oceangoing robots are taking on ever-more complicated tasks and ushering in a technology revolution in oceanography, transforming the everyday work of ocean researchers.
Sept 13, 2017 – Aerial platforms such as UAVs, or drones, as they are more commonly known, are making headway into scientific applications due to the variety of remote sensing capabilities they offer.
Jun 5, 2017 – In the spring of 2015, Monterey Bay experienced one of the most toxic algal blooms ever. A new paper shows that this bloom became particularly toxic because of an unusually low ratio of silicate to nitrate in Bay Waters.