Understanding the glacial history of
the western Arctic

To interpret what we see today both on land and at the seabed, we need to understand how the landscape was different in the past. When we say “past”, we mean on a geologic timeframe—specifically, about 10,000 to 20,000 years ago, when the climate was much colder and glaciers covered much of Canada. There have been several other geological periods in the last million years when glaciers covered the landscape; indeed Antarctica and Greenland and parts of Baffin Island are still covered, but we are most interested in this “recent” one. In particular, we are hoping to collect some of the first data on the western side of the Mackenzie Trough to understand the imprint that glaciation has had on the Yukon Shelf. Scientists have had to speculate on the extent and timing of glaciations because they’ve never been out there with equipment to collect data.

Glaciers are huge ice sheets that can be as thick as one to two kilometers. They move very slowly—hence the phrase “moving at a glacial pace”—shaping the landscape beneath them as they flow. Glaciers carve out materials (sediment and rocks) in some areas, and grind and deposit mixes of these materials in others. The patterns of removal and deposition of these materials are the key pieces of evidence that we are looking for to reconstruct what happened thousands of years ago… a scientific time-machine!

Why is it important to understand the glacial history?

Some areas have a “layer-cake” cover of muds deposited in front of the glacier as it retreated to the coast. The black arrow points to the seabed. The white arrow shows over 40 meters thickness. Below this are mixed sediments, probably from beneath the glacier when it filled the Mackenzie Trough.

Glacial history has direct influence on the strength and properties of the seabed sediments. These have implications for foundation stability (for any seabed engineering), the occurrence of landslides, the temperature of the seabed (which influences permafrost and gas hydrates), and seabed habitat. An improved understanding of the natural system in the Beaufort Sea can contribute in some way to many local and even global issues. 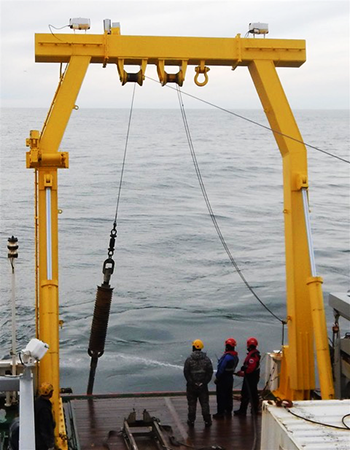 A sediment core has been captured in the steel gravity core barrel that is below the 1,500-kilogram lead weights (pictured to the left of the people) and retrieved at the R/V Araon’s stern.

Investigating the glacial history from the R/V Araon

Once again, we are using all the tools on board the Araon to build up the picture of the seabed and below to, hopefully, develop a better understanding of the geological history of the Beaufort Sea. Using sonar instruments onboard, we can recognize where sediments were removed as the glacier advanced by the broad and deep cuts in the soft rocks and sediments across the continental shelf. This process created the Mackenzie Trough, a long scar over 100 meters deep and tens of kilometers wide gouged over 100 kilometers in length out across the shelf. Then, as the glacier retreated, it left behind massive deposits of mud, sand, and gravel mixes, sometimes entirely mixed-up in what is called a till deposit, and sometimes in well-layered sediment beds, like a layer-cake.

Each successive layer of sediment records the conditions of the environment of the time, and we are attempting to tease out a history of environmental changes, where the beds represent the “pages” of a history book. We have observed more than 80 meters of this mud (with some stones) in some places but 20 to 40 meters is commonplace.

While our sediment cores can only reach a few meters into the muds, not the tens or hundreds of meters that the glaciers carved and deposited, they still provide very important information.

The cores allow us to physically examine the sediment and better identify the types of deposits. With a bit of luck, we will find some “datable” material, such as small fossil shells or tiny “foraminifera”. The material can be sent to a lab for radiocarbon dating that tells us their ages. 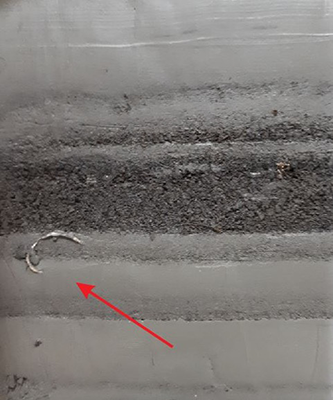 Finding a fossil shell (red arrow) in the glacial muds is a bonus for age dating; otherwise we have to “dig” to collect hundreds of tiny microfossils, a tedious task!

Our first impression is that we have collected some high-quality data that will build upon existing knowledge. It will take plenty of work to put together a coherent picture of glaciations largely through interpreting the extent and behavior of the glaciation from our new seismic records.