Report from the terrestrial field party 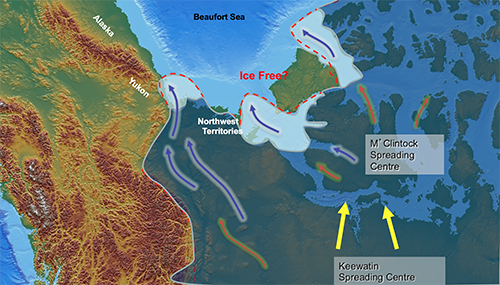 As described in our August 30th blog entry, the 2017 Arctic field program also includes a terrestrial component with Scott Dallimore and Stephen Wolfe from the Geological Survey of Canada (GSC) examining the coastal geology of the northern Yukon. For Scott and Steve, the field program is a bit of a trip down memory lane as they worked together on this coast 30 years ago. In addition to providing logistics support for the Araon field program, they focused this year on observations of terrestrial landscape evolution in response to the approximately two degrees Celsius climate warming that has been experienced in this area in the past three decades. They were also looking for correlation between the marine and terrestrial geology. Specifically, they are examining evidence for glaciation that could have an origin from offshore ice shelves rather than terrestrial sources and are recording the character of marine sediments from the offshore that have been ice thrusted (rock or sediment that has been thrust forward with the movement of a glacier) and now reside in the cliff sections of parts of the Yukon Coast and on Herschel Island.

At 18:00 hours local time on September 4th the research vessel Araon arrived at Herschel Island to offload the marine mammal observers Rhonda Reidy and John and Dale Ruben. It was a rather majestic evening with the Araon beautifully framed in front of the Barnes Mountain range. The ship held position about two and half kilometers offshore and their able, small-boat crew brought the observers to the protected waters of Pauline Cove. Scott, in particular, was very pleased to see the Araon and boat crew as it had been nagging at him, a fair bit, to not be on the ship. All who were aboard the ship were very keen to briefly catch the flavor of historic Herschel Island and hear stories of the muskoxen that had been wandering along the shoreline just a few hours before they arrived. They were also very pleased to report that the multichannel seismic program on the Araon was a terrific success. Aided by calm waters, excellent equipment, skilled operators, and an absence of marine mammals (which we would have been careful not to disturb), the program had met its research goals. Shortly after the transfer of the crew, Scott, Rhonda, John, and Dale moved to Inuvik as a team by helicopter, arriving there at 11:00 p.m. in twilight conditions. The demobilization day also involved moving all of the fuel drums that Scott and Steve had used over the previous five days.

The north coast of Herschel Island is characterized by a sequence of tilted beds which form ridges on the surface of the island. The ridges are composed of marine sediments which are almost certainly similar sediments to those imaged at depth by the R/V Araon during the multichannel seismic program. The terrestrial exposures give a rare glimpse at the sediment properties and character, and the dip directions of the bedding sheds insight into the glacial forces that caused them to be tilted. A fascinating aspect of the geology of Herschel Island and many other locals along the Yukon coast is that glacial ice is still present in the landscape. Large retrogressive thaw flow slides are now exposing this buried glacial ice and rapidly eroding the coastal landscape.

Over the past five years, marine geology studies conducted by the research team on the Canadian Coast Guard vessel Sir Wilfrid Laurier and the KOPRI vessel Araon have gathered evidence of glaciation in the offshore, near the shelf/slope transition. These observations seem to indicate a marine record of glaciation that is different from interpretations derived from terrestrial mapping efforts. The 2017 field program included examination of terrestrial exposures all the way from the Northwest Territories, Yukon border to the Alaska border. Emphasis was placed on making observations beyond the so-called, all-time glacial limit by flying in the helicopter upslope from the coastal plain to the mountain tops. We successfully sampled and characterized more than 20 field sites covering more than 200 kilometers of coastline.