Exploring new areas along the western side of the Mackenzie Trough, Offshore Yukon 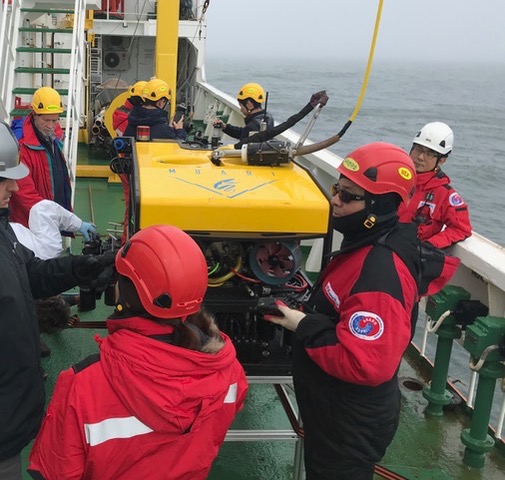 For over five decades, the geology under the Canadian Beaufort Sea on the eastern side of the Mackenzie Trough has been extensively explored for the potential to find oil and gas deposits. Thus, a wealth of data exists in this area, including: multichannel seismic data looking deep into the subsurface, large swaths of multibeam data which are used to make detailed maps of the seafloor (much like topographic maps on land), nearly 100 oil and gas industry exploration wells that were drilled hundreds of meters into the seafloor, and hundreds of short (five meters or less) cores that have been taken for scientific purposes.

In contrast, on the western side of the Mackenzie Trough east of the US Canadian border, very little data exists—just some, low-resolution maps of the bathymetry, a handful of detailed multibeam lines, and one industry well. As we begin to investigate the western side of the Mackenzie Trough, we aim to understand the seafloor processes occurring there and will compare these findings to what has been observed on the eastern side. Much like early explorers, who mapped, charted, and described unknown regions of the earth, we too, are exploring the relatively unknown areas, but replacing compasses and sextant with high-tech tools.

With only 15 days of ship time, we need to target our studies so that we will hopefully develop a solid understand of what looks like postage-stamp-sized areas within the maps of the vast area of the Yukon Shelf/Slope.

These high-tech tools increasingly become more precise as we home in on areas of interest. First, we used existing maps of the Arctic Ocean seafloor to identify areas of potential interest. These maps are of poor resolution—equivalent to looking at a map that is out of focus. We use educated guesses to select targets and use our first tools—the ship-based, multibeam sonar system to produce a more detailed map of the seafloor and the subbottom profiler to produce images of the layers of sediments below the seafloor, as we discussed in the previous post. These data are collected continuously as the ship moves along lines, back and forth, much like mowing a lawn. The results are intriguing, and the first impression is that things look similar and include deep scars from underwater landslides, which cut into the continental shelf and broad, flat swaths of seafloor punctuated by mounds, gullies, and ridges potentially associated with gas or water release.

After days of ship-based data collection and multibeam data cleaning (outliers in the data must be cleaned to make the map useful to geologists), a base map is produced, which can be used to again find areas of interest so that we can deploy even more precise sampling tools: the high-resolution mapping AUV and ROV.

The mapping AUV can collect extremely high-resolution multibeam bathymetry that is used to make very detailed maps of the seafloor. Once areas of interest are selected from the low-resolution ship-based maps, a mission is designed and sent to the AUV, which is deployed and autonomously surveys the seafloor for 16-to-20-hour missions. The maps are of such high-resolution that we can image seafloor features one meter in size.

While the AUV was collecting data during its long mission through the afternoon and into the night, we began using the subbottom profiling data we collected to select locations to target for gravity coring. Coring involves plunging a hollow steel pipe fitted with a plastic liner into the seafloor. To get a core, the coring assembly is lowered to the seafloor while suspended from a steel wire. Above the pipe is a heavy lead weight which drives the pipe into the seafloor. The coring system we are using can have steel pipes that are up to six meters long and has a 250 kilogram weight at its top. At locations where the sediment is soft, the pipe and liner fills with sediment to the full six-meter length; when the seafloor is hard we may only get one to three meters of sediment or less. The coring system is then pulled out of the sediment and winched up to the surface. Once back onboard the R/V Araon, the sediment-filled liners are taken out. These cores, which provide samples of changes in the sediments with depth, are then available for study. Most of the samples we have taken will be sealed on the ship and returned to the laboratory at KOPRI, where they will be analyzed in detail using a range of techniques to determine the various properties including age of the sediments, type and source of sediments, and chemistry of water trapped between layers and grains of sediments. Among the topics of special interest on this cruise is what the conditions were like 10,000 to 12,000 years ago.

The final and most surgically precise tool in our modern-day tool box is the remotely operated vehicle, or ROV. Outfitted with a high-resolution video camera, a robotic arm, push cores, and a sampling box, we survey the seafloor by “flying” the ROV over terrain that we determined to be the most promising from the multibeam bathymetric maps. These ROV ground-truthing surveys allow us to examine, discuss, and sample material just like geologists do on land. Fortunately we do this all while staying warm and dry within the ROV control van. In the last two days we conducted four ROV dives, collecting approximately 30 rocks and eight push cores. Two push cores were collected in a patch of bacterial mat growing on the seafloor and released a trickle of bubbles upon collection, both indications of the presence of methane gas.

Surfacing from its approximately 18 hour deployment, the AUV was recovered using the small boat and returned safely onto the deck of the Araon. After three hours of data processing, the initial results revealed a stunning seafloor topography containing linear scarps, elongated depressions, and ridges which are usually parallel with the shelf edge. There are also circular mounds up to 10 meters high, often with collapsed summits. To our knowledge, the only place where a comparable topography has been mapped is on the eastern flank of the Mackenzie Trough. Clearly this suggests that whatever processes form this unusual morphology are occurring on both sides of the Mackenzie Trough.

A great deal of analysis needs to be done on all of our collected data once we arrive back at our respective laboratories onshore. Using all of these tools helps researchers develop a more complete understanding of geological processes that have occurred and are occurring around the Mackenzie Trough region.

As a result of poor weather, with winds up to 40 knots, we were unable to deploy the AUV or ROV today. Thankfully, the Araon is a very robust vessel designed for rough seas and we are weathering the storm quite comfortably!

— Lonny Lundsten and Michelle Côté on behalf of the scientists