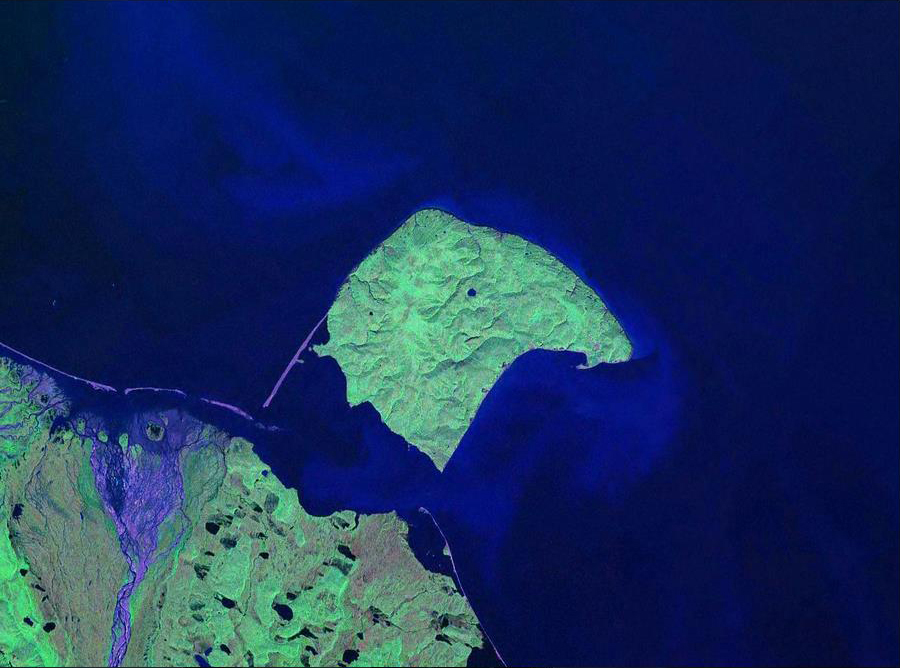 The Araon science program began immediately upon crossing the Canadian border with targeted multi-beam and sub-bottom mapping of an interesting trough feature that occurs on the Yukon shelf. After about 36 hours of transiting and science activities the ship arrived at Herschel Island to pick up three marine mammal observers who will play a vital role while the ship conducts a multi-channel seismic program. Scott Dallimore and Stephen Wolfe from the Geological Survey of Canada (GSC) are coordinating the logistics for the Herschel Island rendezvous with access to the site provided by Gwich’in Helicopters via the Polar Continental Shelf Project.

The flight from Inuvik to Herschel takes about one and a half hours, crossing the Mackenzie Delta (the second largest delta in the Arctic) and then transiting along the north slope of Yukon. The scenery is indeed spectacular, as is the history of the area. Recognizing the unique character of Herschel Island, the Yukon Government established it as a Herschel Island-Qikiqtaruk Territorial Park in 1987 in accordance with the terms of the Inuvialuit Final Agreement.

The Yukon Government’s fascinating website explains that the island has been home to the Inuvialuit people who have used the site for thousands of years as a base for hunting, fishing, and whaling. The Inuvialuktun word for Herschel Island is “Qikiqtaruk,” which simply means “island.” Qikigtaruk changed substantially after the first visit to the island by Sir John Franklin in 1826. By the late 1800s the sheltered water of Thetis Bay and Pauline Cove attracted the burgeoning whaling fleet which, having depleted baleen whales in the north Pacific, was moving into the Beaufort Sea. They established a whaling station with dozens of vessels overwintering at Pauline Cove with a population, at times, numbering more than a thousand. This tumultuous time had substantial environmental and social impacts far beyond the depletion of the bowhead whales. Several historic structures are still standing.

Herschel Island has also been a focus for scientific research for more than a century. The first scientific expedition sponsored by the Canadian Government (the GSC no less!) worked from Herschel Island and nearby King Point from 1913 to 1916. In a small way, Scott and Stephen also have a long history of scientific research in the area that they will continue over the coming days. In 1986 and 1987, they spent almost 10 weeks working from small zodiacs as they studied the coastal and permafrost geology of the Yukon coast. The highlight of their trip was a stop at Herschel Island, which just happens to have a sauna mixed in with the historic whaling structures! Scott was just a new GSC scientist at the time and Steve was a summer student, who shortly thereafter became a permanent employee at the GSC in Ottawa as a permafrost scientist.

Thirty years later and there are still research topics to pursue! The interest during this field season is to undertake a reappraisal of all things glacial. A key objective is to consider and document the correlation of the offshore geology that will be studied from the Araon with the terrestrial geology present on land. Interest in this topic was stimulated by Scott and MBARI Scientist Charlie Paull when they visited a terrestrial exposure on the Yukon coast in 2013 and observed a diamicton deposit with very large boulder drop stones. Diamicton is a sediment resulting from erosion on dry land; it contains a mix of clay, boulders, mud, and sand. This unit looked very much like the glacial deposits that we are finding offshore in our ROV dives and geophysical studies. Scott, Charlie, and Michelle Côté (of the GSC) spent three days camping at Herschel Island in 2014 to sample cobbles.

This summer, Scott and Steve will take a close look at the sediments that make up Herschel Island as they appear to have formed by glacial ice thrusting of ancient marine sediments. As shown in the map of Herschel Island, there are very distinct ice-thrusted ridges on the island and outcrops of buried glacial ice from the Pleistocene glaciation. In addition, they will be sampling glacial sediments all along the Yukon coast to the Alaska border to document the origin of these sediments.