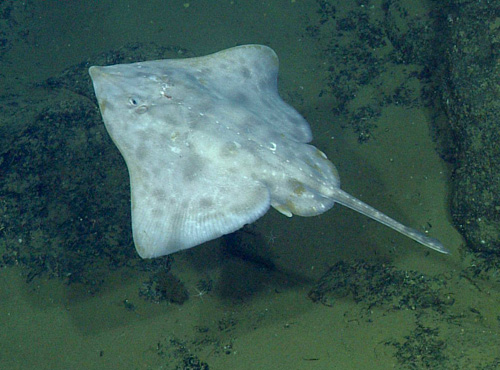 Traveling back in time

Julie Bowles writes: Today was like traveling back in time! Our goal was to establish an approximate eruptive history at this location, so we started our dive about three kilometers to the west of the active Alarcón Rise axis. Flows out here are generally tens of thousands of years older than what is seen on axis, and throughout the course of the dive we traveled towards the younger axis flows in an attempt to generate a time series of eruptive events. Lava flows presently on the axis flanks may have erupted along the central axis and shifted off-axis through the movement of the tectonic plates. They may have erupted from the central axis and flowed downslope, ponding off-axis; or they may have erupted from a vent located off-axis. Determining an exact sequence of events can therefore be a little tricky sometimes, so we use a variety of evidence to estimate age.

Some clues come from the bathymetry data alone. The bow-shaped cone on the map below is actually half of a volcano that was erupted on-axis and then split apart. (The other half of the volcano can be found on the eastern side of the axis.) The intact volcano immediately to the east most likely erupted off-axis, otherwise it would also be split in half or more heavily faulted. So the intact volcano is younger than the split volcano.

On the dive, we observed sediment thickness, which is loosely related to the age of the underlying flows. We also collected sediment cores. By radiocarbon-dating the tiny foraminifera animal shells from the base of these cores, we get a minimum age estimate for the underlying flow. These cores will also be used to study climatic variations over the past few thousand years, as recorded in the shells of these animals.

Examination of rocks collected from the seafloor, as well as volcanic glass chips found in the sediment cores, allows us to see how the magma chemistry evolves with time. This tells us about the magma plumbing system that feeds Alarcón Rise. Combining all these observations gives us a much better idea of how the volcanic system works, including how frequently eruptions occur. Although we have a fairly good idea of how volcanic activity varies with time in land volcanic systems, we have very few data points to that allow us to make similar estimates for submarine volcanic systems.

Abbie Johnson, a geobiologist, is also interested in today’s age transect. While the geologists are interested in learning how the volcanic system evolves with time, she is interested in using the same samples to find out how sediments evolve with time and how tiny microbes colonize the rocks.

Abbie Johnson writes: I am a graduate student at the University of Rhode Island in the geosciences department with Dawn Cardace as my advisor. This is my first long research cruise and, so far, I’m having a blast out here. My field of study is geobiology–the study of biological processes that directly interact with geological features, such as minerals and rocks. After getting accustomed to my sea legs the first night, I’ve been processing rocks and sediment cores that we’ve collected. For my research, I will use a technique, called Fourier transform infrared spectroscopy (FTIR), to detect traces of microorganisms, such as bacteria and archaea, in rocks. These organisms are very impressive because they are evolved to withstand the low light and extreme conditions of the seafloor. I also plan to conduct DNA analyses on these organisms to fully characterize the microbes that can use certain elements for chemosynthesis.

Chemosynthesis is a process in which some organisms use energy from chemical reactions between inorganic compounds (such as iron or sulfide) to produce organic matter. Sulfide is abundant in the hydrothermal vents from which we have sampled. When the rest of our research team is processing cores, I collect a subsample for DNA analysis. This will let us know what kind of microorganisms live in each layer and in different areas of the ridge system.