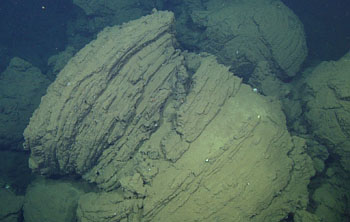 The surface of these rhyolite lava pillows is rough and corrugated. This is because the high silica content makes the rhyolite lava very viscous (pasty).

Ryan Portner writes: Today we dove on the Alarcón Rise mid-ocean ridge. With few exceptions, mid-ocean ridges typically lie very deep beneath the sea surface. They are a locus of active volcanoes, hydrothermal vents and chimneys, and an abundance of life. Mid-ocean ridges occur where two tectonic plates move away from one another. As the plates spread apart, basalt lava comes up to the surface from deep in the Earth. Basalt is a silica-poor volcanic rock and forms the majority of the 72,420-kilometer (45,000 mile)-long mid-ocean ridge system.

The purpose of today’s dive was to explore a very unusual geologic feature—a mid-ocean-ridge rhyolite dome. Rhyolite is a silica-rich volcanic rock that typically forms on continental crust but not on mid-ocean ridges. In fact, the occurrence of rhyolite on the mid-ocean ridge system is so unusual that such a feature had never been discovered until this one was found by MBARI in 2012. Rhyolite has only been described from areas of the mid-ocean ridge system that are exposed above sea level, such as in Iceland and the Galapagos. In those areas, it is thought that unusually thick oceanic crust helps form the unusual rocks. Such an explanation cannot be the case for Alarcón Rise, which is by and large a normal mid-ocean ridge. Samples and ROV observations, guided by AUV maps collected by MBARI several weeks ago, will provide the necessary framework to understand how the Alarcón Rise rhyolite dome formed.

One of the challenges of working on the rhyolite dome is its highly rugged nature. During our dive we ascended and descended cliffs and overhanging walls composed of vast piles of very large boulders and blocks. The control room was buzzing with anticipation and excitement. Frequent communication between the scientists, the ROV pilots, and ship crew were essential in positioning the ROV to acquire samples and make key observations. It was a highly successful dive that will result in many hours of sample preparation and analysis back in the lab.