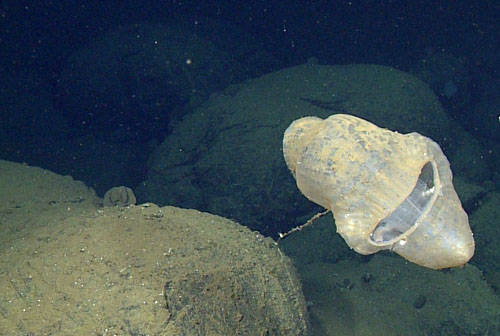 We observed this unusually large specimen of a Culeolus stalked tunicate. It is roughly 25 by 40 centimeters.

Ronald Spelz writes: One of the major goals of today’s ROV dive was to examine the Tamayo transform fault, a very important structural domain at the southern Alarcón Rise. This fault system, analogous to the San Andreas Fault in southern California, is the boundary between the Pacific and North American plates in the southern Gulf of California. Over time, the relative motion between these tectonic plates builds up a tremendous amount of energy in the upper crust, which can be suddenly released during an earthquake in the form of elastic seismic waves, intense heating, and deformation along a series of parallel faults. By studying this area in detail, we aim not only to comprehend the tectonic processes that shape this region, but also to model the deformation to better understand the mechanics of earthquakes.

Julie Bowles writes: Volcanic activity typically becomes much less frequent closer to a transform fault along a spreading center. However, we suspected that some of the flows in this transitional area are quite young because seismic reflection data indicated no sediment cover. The ROV dive showed that there was indeed sediment on these flows but that it was less than a meter thick, consistent with relatively young flows (less than a couple thousand years old). It is somewhat unusual to have flows so young within a transform, and this tells us something about the magma system that feeds the entire segment.

This interpretation of relatively recent volcanic activity is supported by the discovery of some intriguing clam beds. Clam beds along transform faults are not unusual and typically represent what is called a cold seep. However, there are some differences between our observations and a typical cold seep that suggest our clams are benefiting instead from very low-temperature hydrothermal venting driven by still hot volcanic rocks.

Rob Zierenberg writes:Cold seep animal communities (such as clams) benefit from a process called chemosynthesis. During this process, bacteria living within clams use the oxidation of hydrogen sulfide to create organic matter (food), forming a symbiotic relationship between the bacteria and clams. Organic matter buried in sediment can be degraded by a group of bacteria to make methane. This process is slow and generally requires deep burial of the organic matter by a sediment layer that is hundreds of meters thick, and it only occurs in the absence of oxygen.

If enough methane is produced, methane-rich fluid can rise near the surface, where seawater with dissolved sulfate is present. A group of microbes called sulfate reducers can then “burn” or oxidize the methane using the oxygen in the sulfate. The byproducts of this reaction are bicarbonate ion and hydrogen sulfide. It’s the hydrogen sulfide that supports the chemosynthetic clam communities near hydrothermal vents.

However, this cold seep occurs on volcanic rocks with only tens of centimeters of sediment cover, much too thin and young to result in production of methane from organic matter. We hypothesize that this cold seep is in fact a very low temperature hydrothermal vent.  If this is correct, the ultimate source for the sulfur is the basaltic volcanic rocks. Methane-based cold seeps have been found at other transform faults, but this may be the first low temperature hydrothermal seep from a transform. When we return to the lab, we can test the isotopes of sulfur in these rocks which will help decipher whether the hydrogen sulfide was produced by bacteria or from the basalt.