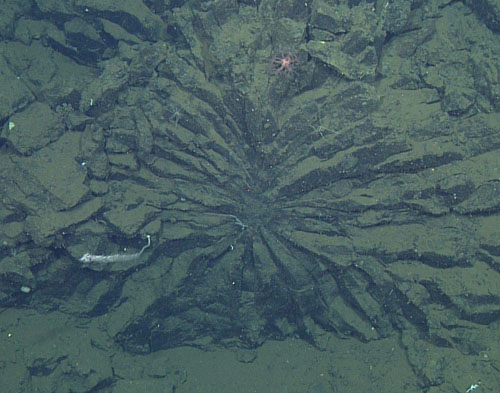 Chrissy Maschmeyer writes: The purpose of our expedition today was to determine if volcanic rocks containing silica occurred along the spreading ridge south of the previously identified rhyolitic lava dome. Oceanic ridges typically erupt basalt, which is denser and contains less silica than continental crust, and is considered to be more directly derived from the Earth’s mantle.

Earlier today we observed extreme sunburst radial jointing in the interior of a pillow lava that had been exposed by a fault. This pattern suggests the lava is likely of a higher-silica composition. With this encouraging observation, we were certain we would find high-silica lavas away from the center of the spreading ridge and south of the rhyolitic dome. I was especially excited because my master’s research is the creation of a classifier that can accurately predict lava composition based on lava morphology in maps of mid-ocean ridges.

While in South Carolina, I was able to determine a site that I thought contained high-silica rocks based on visual analysis of MBARI’s high-resolution AUV maps and initial results from my classifier. Our chief scientist, Dave Clague, had independently identified the same area as a site of interest. Today, we explored that region with ROV Doc Ricketts and found the contact between basaltic pillow lavas and lavas that contain higher levels of silica.

In the control room, the ROV pilots and science team referred to the grooved pillow lavas as having a “bread crust” texture. Similar samples collected in 2012 in the same area were composed of dacite, andesite, and even rhyolite. When we return to land, geochemical analyses will confirm the composition of these rocks, but we are confident that this bread-crust texture seems to be a morphological signature we can use to distinguish the higher-silica rocks at spreading ridges.