An autonomous vehicle coupled with a robotic laboratory proves its worth 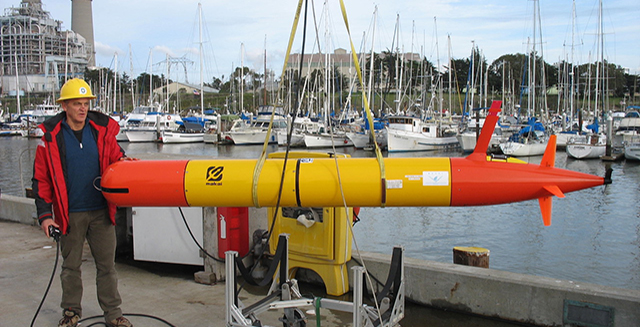 Every drop of seawater contains thousands of cells that can reveal the diversity of life in our ocean. Using a self-contained robotic laboratory and an autonomous underwater vehicle, MBARI scientists and engineers are developing advanced collection techniques that may one day simplify the jobs of biologists and resource managers.

A recent study confirms that autonomously collected samples of environmental DNA (eDNA) are equivalent to samples collected by people using traditional, manual methods. eDNA refers to all of the DNA that can be extracted from an environmental sample, including from a myriad of microorganisms and larger animals via particles of skin, mucus, and waste that they shed.

A growing body of research indicates that wildlife surveys using eDNA analyses can be as (or more) accurate than simply using traditional methods. As such, eDNA assessments appear to offer a very promising and cost-effective means for monitoring biodiversity, which presents an attractive proposition for researchers as well as resource managers who study ocean ecosystems.

Previous research in this field has focused on sampling specifics such as the types of filters that are used to concentrate eDNA from water samples or the methods for analyzing and interpreting eDNA signals found within those samples. It is still a major challenge to understand how researchers can apply eDNA analytical techniques over large expanses of ocean or over long periods of time. At present, eDNA surveys in the open sea require extensive ship time, which is expensive, labor intensive, and limiting. 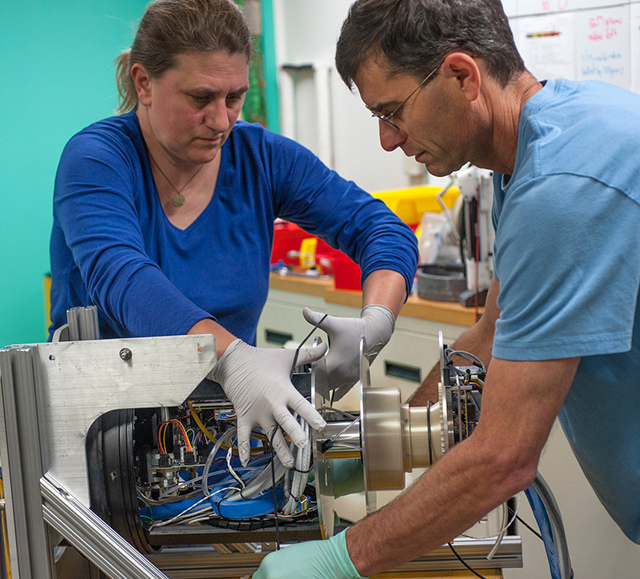 To address those issues, the authors of the new study used a new generation of MBARI’s Environmental Sample Processor (ESP) and paired it with MBARI’s long-range autonomous underwater vehicle (LRAUV).

The ESP is a compact robotic laboratory that automates the collection and processing of water samples. The version used in this study can acquire up to 60 samples. The LRAUV carries the instrument, allowing it to range freely in the ocean for days to weeks from the surface to 300 meters (984 feet) depth while collecting samples at certain times or under specific environmental conditions. The result: a system that enables eDNA collection at sea without a human presence in the field. 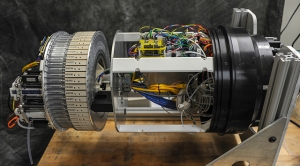 The ESP prior to its placement in the autonomous vehicle that will take it to sea. © 2018 MBARI

“The merging of robotics, DNA analytics and marine operations will lead to a transformation in how we do ocean sciences and this eDNA work is just the beginning,” said Jim Birch, who oversees the MBARI group that developed the ESP.

The researchers’ aim was to compare the ESP’s ability to automatically collect samples relative to established protocols that rely on human hands. Samples for these tests came from the Kelp Forest Exhibit at the Monterey Bay Aquarium and from Monterey Bay itself. 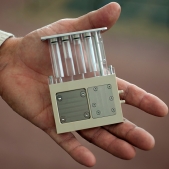 The study looked at DNA from small organisms like microbes and phytoplankton as well as larger animals like krill and anchovies. The team also tested the effectiveness of the ESP to preserve DNA samples that remain aboard the LRAUV while it is at sea.

“The first step in ‘trusting’ robotic collections is to show that they give equivalent results to traditional methods. This work is an exciting confirmation of that first critical step,” Birch said.

For the samples collected and preserved automatically, the eDNA concentrations were nearly equal to those collected by manual methods for both the smaller microbes and phytoplankton as well as the larger krill and anchovies. ESP-preserved samples of eDNA showed no differences in concentration for any of the organisms tested over a 21-day time frame—the length of time the LRAUV may be deployed and away from shore.

“The LRAUV is a nimble approach to ecosystem assessment. The instrument can be deployed day or night and in foul weather, allowing rapid response to events,” said Kelly Goodwin, a coauthor of the study from the National Oceanic and Atmospheric Administration (NOAA). “Because a big, expensive ship is not required, samples might be collected more often. Better sample coverage could aid models and forecasts, which help keep waters and seafood safe and help sustain the services we get from the ocean, like fishing.” 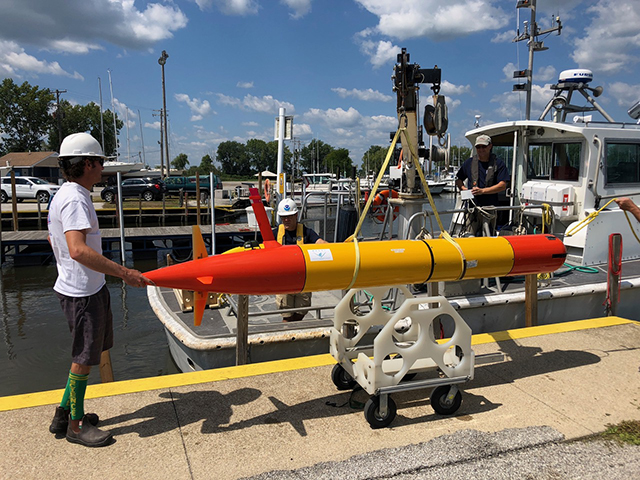 Software Engineer Brian Kieft loads the long-range AUV onto the research vessel Paragon before its next mission. Image: © 2018 MBARI

The ability to collect DNA in a more cost-effective (and time-effective) manner has the potential to revolutionize the way we approach ocean science and ecosystem monitoring. From studies of open-ocean eddies to rivers and lakes, automated sample collection and analytical systems offer opportunities for furthering our understanding of ocean processes, as well as tracking managed, invasive, or harmful species.