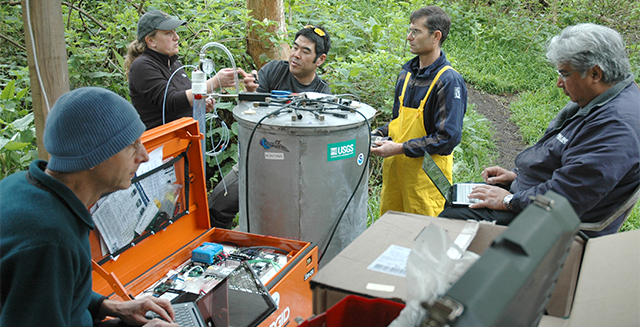 Just as steelhead trout migrate from saltwater to freshwater and back, MBARI’s Environmental Sample Processors (ESPs)—first developed for research in the ocean—have been getting a lot of use in freshwater over the last five years.

This spring, the ESP team installed an instrument to collect samples of “environmental DNA” from a coastal creek just north of Monterey Bay. Researchers will use these samples to track populations of threatened steelhead trout, endangered coho salmon, and invasive species in the creek.

In the process, they could help revolutionize environmental monitoring and fisheries management nationwide.

The research is a joint project of MBARI and the Monterey Bay Aquarium, with funding from the Arthur Vining Davis Foundations as part of their newly launched Environmental Engagement, Stewardship & Solutions program. The work is being carried out in collaboration with the US National Oceanic and Atmospheric Administration (NOAA). It is part of MBARI’s continuing effort to provide scientific data with direct application for ocean and wildlife conservation.

Environmental DNA (eDNA) is similar to the forensics used in criminal court cases. But instead of trying to find DNA in bits of hair or saliva at a crime scene, eDNA researchers can simply collect samples of water. These water samples will contain tiny particles of skin, mucus, waste, or other organic matter from the animals that live in the water. Researchers filter the water to concentrate these particles, extract the DNA, and then sequence it. By doing this, researchers can identify what kinds of animals live in the water and, in some cases, how abundant their populations are.

It is possible to collect water samples for eDNA analysis just by dipping a sterile container into a body of water. But MBARI’s ESP collects and processes water samples automatically, as often as once an hour. This allows researchers to study how fish populations in a stretch of river change at different times of day—or over periods as long as months.

Collecting samples frequently and repeatedly is important for eDNA work because DNA degrades over time. So if a fish passes through a stretch of river, its residual DNA might only be detectable for a few days afterward. Figuring out how long the DNA persists in the water is one of the goals of the current project. Another goal is to compare the results of eDNA analyses with the observations of trained wildlife biologists who count fish in California streams.

The ESP can also collect information about the temperature and chemistry of stream water, which can be correlated with the results of the eDNA analyses.

Kevan Yamahara, an MBARI research specialist, has been working on eDNA for almost five years. Several years ago, he helped assess the effectiveness of eDNA by testing water from the Open Sea Exhibit at the Monterey Bay Aquarium, where aquarists already knew what kinds of fish were present. That landmark study was instrumental in showing that eDNA analyses of ocean water could potentially be used for resource management. That led to MBARI’s use of the technology in NOAA’s five-year, $7 million Marine Biodiversity Observation Networks (MBON) program.

Yamahara performed a pilot study of the eDNA of steelhead trout in the Carmel River, near Monterey. He will be conducting additional eDNA research in the Carmel River as part of the current grant from the Arthur Vining Davis Foundations.

The most recent ESP deployment was in Scott Creek, a small coastal stream the flows into the ocean in northern Santa Cruz County. Scott Creek is a particularly interesting location from a conservation perspective. Not only does it have an active run of steelhead trout, it is also the southernmost body of water in California to support coho salmon (though in very small numbers). It is at risk of being colonized by two invasive species: striped bass and New Zealand mud snails. 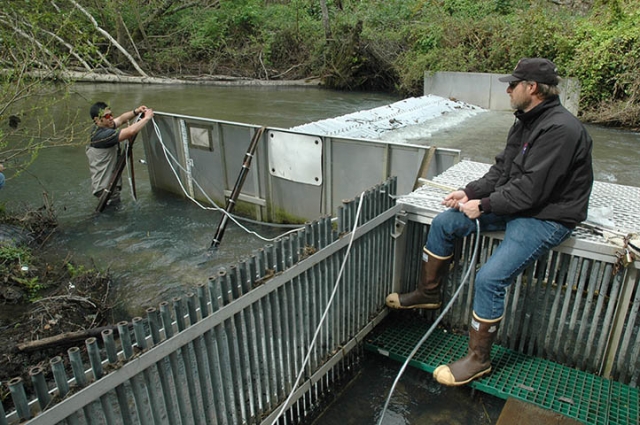 Kevan Yamahara and Doug Pargett install the pump system downstream of the fish trap. The pump system provides water to the Environmental Sample Processor, which is stationed in the NOAA work shelter adjacent to the fish trap and weir. Image: Kim Fulton-Bennett © 2019 MBARI

In late March 2019, a team of MBARI researchers installed a solar-powered ESP on the bank of Scott Creek. One to three times a day, water from the creek is pumped up to the ESP, where mechanisms inside the ESP filter the water and then add a preservative to prevent the DNA from breaking down. 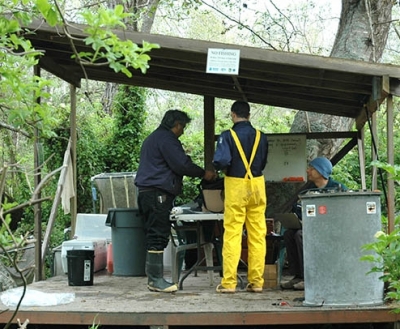 The ESP is located adjacent to the NOAA weir and fish trap on Scott Creek. The ESP (grey cylinder on the right) is stationed on the deck of the work shelter used for NOAA fish trap work. Image: Kim Fulton-Bennett © 2019 MBARI

The researchers are just beginning to extract DNA from the first set of filters. Analyzing that DNA will take several more months. At this point, the experiment is scheduled to run for an entire year, until March 2020. Having a 12-month record will create a unique data set for researchers, and could also help fish conservation efforts.

In the future, some types of DNA analysis may be performed automatically by the ESP, with the results transmitted back to MBARI and resource-management agencies in near-real time.

“If we could install enough of these ESP-based systems,” said Principal Investigator and MBARI CEO Chris Scholin, “it would be possible to create an ‘eDNA map’ not unlike a weather map.” 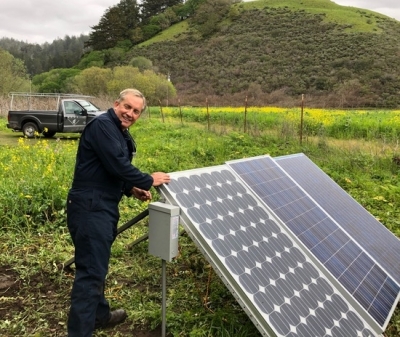 Jim Birch installs the solar panel array that charges the battery pack powering the ESP. The solar panels and battery charging system allow the ESP to operate completely off the grid. Image: © 2019 MBARI

NOAA is already using ESPs to monitor water conditions in the Gulf of Maine, Lake Erie, and the Pacific Northwest. And NOAA’s National Marine Fisheries Service is funding traditional research on steelhead trout and coho salmon along the California coast. If the current ESP deployment generates useful data, it could lead to a revolution in fisheries management, both in California and across the US.

“In the last few years, eDNA has really taken off,” noted Yamahara. “Many people are doing this research, but most of them don’t want to be out sampling four times a day, seven days a week. The ESP can make that happen in a less labor-intensive fashion.”