A key objective of this research program is to improve our understanding of subsurface geology and permafrost and gas hydrate distribution. We hope to quantify the occurrence and release of fluid and methane gas at depth with an aim of understanding sediment instability, both landslide-type and fluid-related. The primary geophysical method used to asses this scientific question is marine reflection seismic, which involves transmitting controlled acoustic (sound) energy through the ocean into the seafloor and recording the energy that is reflected back from the different layers beneath the sedimented surface of the seafloor. Seismic data acquisition depends on the generation of pressure (i.e. seismic or sounds) waves. Devices called airguns produce a seismic wave when compressed air is released into the surrounding water. The sound waves produced by the airguns travel downwards to the seafloor and into the sediment below. Some of the seismic energy is reflected back from the top of any of the underlying layers and returns to the surface, where it is recorded with listening devices called  hydrophones. The hydrophones are housed within a streamer that is towed behind the ship. The streamer on the Araon is 1.5 kilometers long and is towed at six meters below the ocean surface.  The vessel travels at approximately eight kilometers per hour (five knots) while we are surveying. 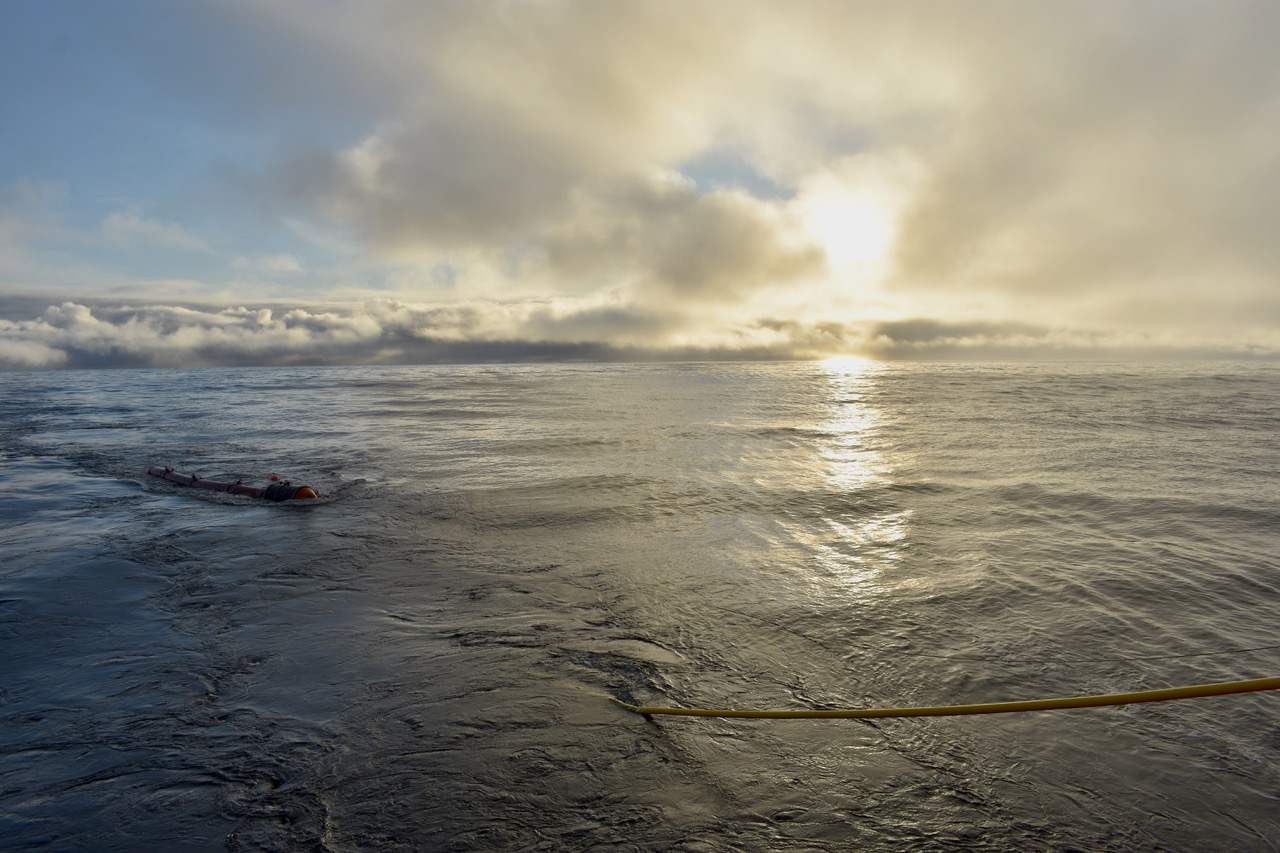 Streamer for the multi-channel seismic system being deployed from the rear deck of the Araon.

During our expedition a two airgun array will be used, with a compressed air volume of 420 cubic inches.  This array is particularly well-suited for producing an image of the different layers from the seafloor and below, to a depth of about 1,000 meters. This seismic configuration contrasts with oil and gas industry hydrocarbon exploration programs which use much larger volumes of compressed air (energy) and can image many kilometers below the seafloor.

Five days of our research program are dedicated to conducting a seismic survey along very specific lines of interest. Many of the lines will target features and zones we know exist but need better data to interpret their origins, while some lines fill in gaps across virtually unexplored territory.  We hope to collect about 1,000 kilometers of seismic data along 12 to14 survey lines. The resulting seismic images will be used to assess the regional geologic framework of the Beaufort Shelf and slope, to identify the history of sedimentation in the Beaufort Basin, to identify any potential gas hydrate and permafrost present, to understand the glacial history of the Beaufort Sea, as well as to determine geohazard issues related to submarine instability and landslides.

Our research program implements many mitigation measures, developed in consultation with Fisheries and Oceans Canada, to minimize the impact of our research on the environment and, specifically, during the acoustic surveys, marine mammals. One such measure is to have marine mammal observers onboard to watch for the presence of marine mammals within a 1,000-meter safety zone around the vessel, both before and during seismic operations. The seismic data acquisition can only begin when this safety zone is clear of marine mammals for one hour. If a mammal enters this safety zone during the seismic operations, the airguns are immediately turned off. The marine mammal observers then determine when it is safe to resume operations. 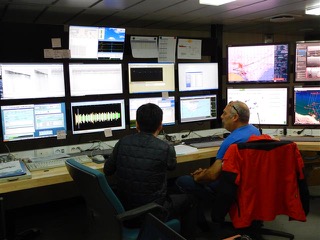 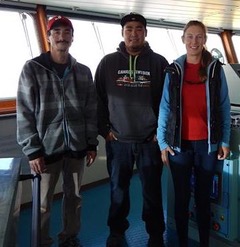 Marine mammal observers John Ruben, Dale Ruben, and Rhonda Reidy, on the bridge of the Araon.

The seas have calmed and the sun is out today. After lunch we were treated to a spectacular view of snowcapped mountains surrounding Mackenzie Bay to the south in Northwest Territories of Canada.