Pingo-like features and mud volcanoes on the eastern Mackenzie Shelf

On the adjacent land of the Tuktoyaktuk Peninsula approximately 1,350 pingos are known to occur. Pingos are round-to-oval, mound-shaped features that form on land when fresh water enters the near-surface sediments in summer and then freezes in winter. As the ice forms, physical expansion occurs and pushes up the sediment layers above it creating the pingo.

Pingo-like features found on the seafloor are circular mounds that come up like haystacks from the seafloor and they superficially resemble pingos found on land. The underwater PLFs were first discovered in this area in 1969 and were investigated as a potential hazard to navigation. Since then, thousands of PLFs have been identified along the continental shelf/slope and only a handful have been studied in detail to understand how they form.  One of the goals of this trip is to try to understand whether the marine PLFs and the terrestrial pingos are actually similar features and formed under similar processes. 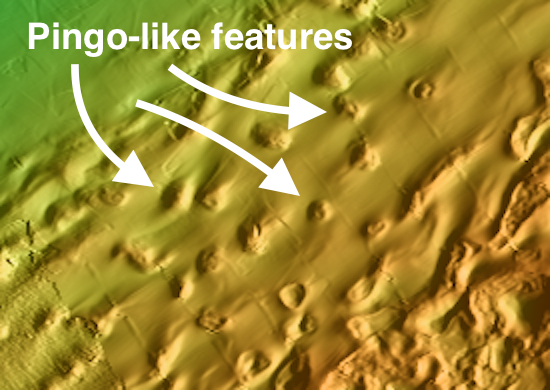 In multibeam bathymetry, PLFs look like rows of circular mounds and, when collapses exist, donuts. We chose four PLFs to investigate with the ROV; these PLFs are 10 meters high and 70 meters in diameter. While surveying, we found abrupt transitions between the smooth and flat seafloor which surrounds the PLFs, to 30–to–40-degree slopes of the PLF flanks. The flanks contain small boulders, cobble, and gravel—these are not seen on the surrounding seafloor and we speculate these materials have been pushed up from deeper in the seabed.

We also encountered communities of animals that feed on the small planktonic organisms that drift past them in the currents, including soft corals, basket stars, and crinoids. We often find these animals on sloped terrain, like the flanks and summits of the PLFs, where currents are faster and more food flows past them. Other animals found in this area included a variety of fishes, worms, sponges, brittle stars, and anemones. 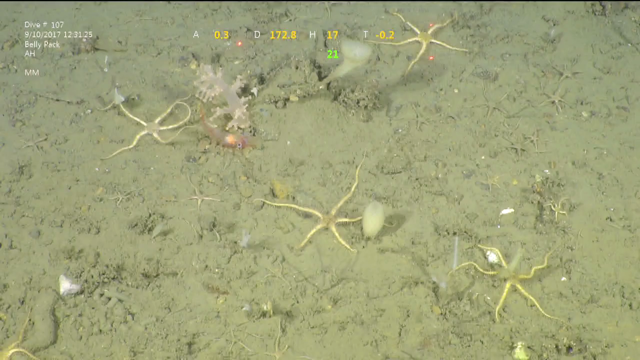 Mud volcanoes are also circular seafloor features (some cone-shaped and others with flat tops), but they are formed by a different process. These larger, pancake-like features, are more than one kilometer across and 10 to 30 meters tall, and are areas that have subtle changes in seafloor topography. Mud volcanoes form when methane gas, seawater, and highly fluidized mud bubble up on the seafloor from approximately one kilometer below. The first mud volcano we surveyed was located at 420 meters below the sea surface. 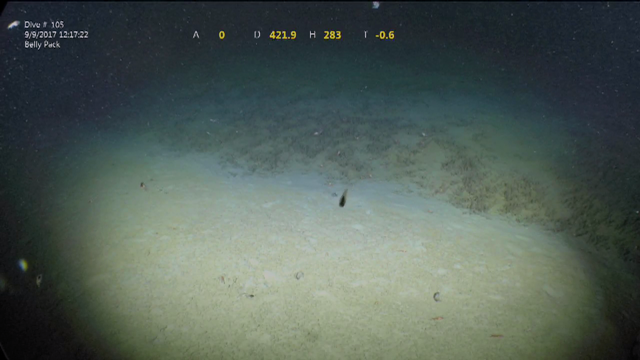 Contact showing juxtaposition of young and old mud flows, with dense siboglinids (very light and hard to see white and reddish shapes in the top half of the photo) on old flow in background on mud volcano 420 meters below the sea surface.

The form of the mud flows are visible in the multibeam bathymetry and we could detect what we believe are the various ages in both the sidescan sonar and with the ROV. With the ROV cameras, we saw abrupt color changes from light grey to dark grey between very young and very old flows. We also detected differences in the chemistry of the layers below the seafloor and, on the oldest of flows, we saw scattered, dense populations of chemosynthetic worms (

At the deeper mud volcano (740 meters depth), we saw evidence of mud flows in the bathymetry. By using repeat mapping techniques, we have identified annual changes in surface topography. During the ROV dive, we found a vent area where fluidized mud was actively moving, like the top of boiling water—the surface of the seafloor was roiling. Small gas bubbles were coming out of the mud almost continuously, and periodically larger bursts of gas carried sediment up into the water column. Surrounding the vent area were trails of what appeared to be very fresh mud flows running down the gentle slope on the side of the mud volcano. These observations provide a glimpse of how mud volcanoes build up. Sea life was less abundant here, but did include a few scattered anemones, fishes, beautiful skates, and the ever-present krill, which have been incredibly abundant on nearly all of our ROV surveys. 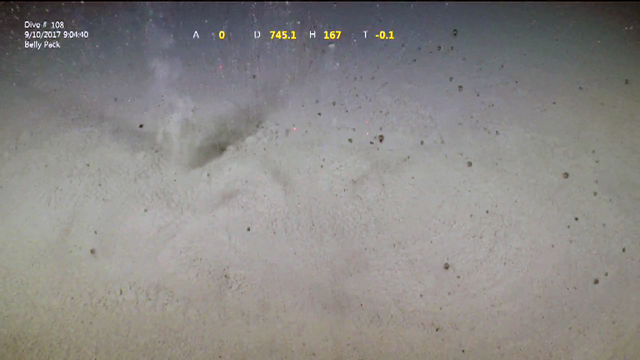 Methane rapidly bubbling from a mud volcano in the seafloor at 740 meters depth.

The seas have been calm and winds have been light, however, Arctic sea ice was approaching the ship during the ROV survey, which meant we had to abort the ROV dive very quickly and move to a new survey location. Our second survey site was also not accessible due to sea ice. We took advantage of this opportunity to enter the sea ice edge with the ROV, if briefly, to see firsthand the incredible beauty of the drifting ice. It was truly amazing. Tomorrow we transit back to the west Mackenzie Shelf for our final two days of surveying.