We recovered two AUVs during the first several hours of the morning. At 10:30 a.m. the MiniROV arrived at the seafloor at a depth of 240 meters. The mission objective was to ground truth a slump scar using the video camera on the ROV.  A slump scar is essentially an underwater landslide with exposed bedded layers similar to the way a roadcut exposes layers of sediment on land. We watched the video feed as the MiniROV traveled over flat, sedimented seafloor on its approach to the slump scar. 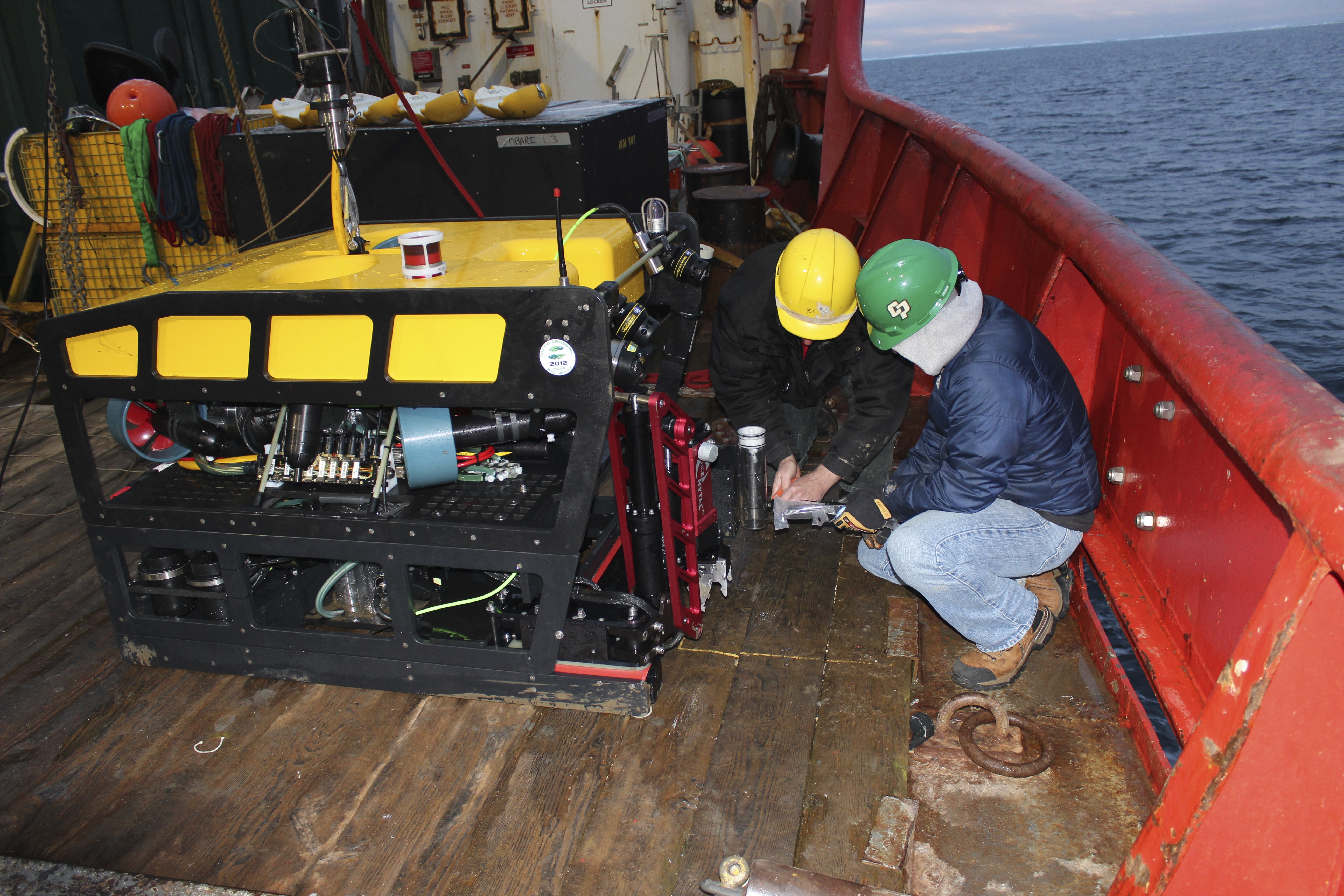 The MiniROV aboard the CCGS Sir Wilfrid Laurier.

During the exploration within the slump scar, we collected two push-core samples and a cobble. The documentation of cobbles is significant because they are not specifically part of the background geology in this area. The varying pebble types and abundance of cobbles suggest that they have been deposited by glacier ice. Their specific characteristics can help us determine their source of origin and reconstruct the glacial history of the Beaufort Sea area.

The MiniROV also passed over several unusual marks in the seafloor that resemble elongated scoops removed from the seafloor—think of the mark you leave when you scoop a spoonful of ice cream off the top of a pint. We think the marks, which are 15–30 centimeters wide and several meters long, are related to marine mammal (possibly whale or seal) feeding. In other parts of the world, grey whales and several other whale species feed on organisms living in and on the muddy seafloor by essentially diving down to the seabed and taking a big scoop of sediment away with their mouths. Baleen whales will then push the water and mud out through the baleen leaving them with a tasty mouthful of crustaceans, fishes, and worms.

Another theory suggests that the depressions are created by whales during bottom feeding as they attack prey. The whale locates prey and dives after it; the depressions are created by the jaw of the whale hitting the seafloor during the pursuit. The sediment is lifted up from the seafloor then deposited around the mark during departure, resulting in the gouge mark (Hain et al., 1995). In an effort to investigate this further, the ROV pilots recorded a video mosaic of a mark that Lonny then processed with a three-dimensional (3D) modeling program. This will allow us to accurately calculate the dimensions and volume of sediment that was removed from the “scoop.” 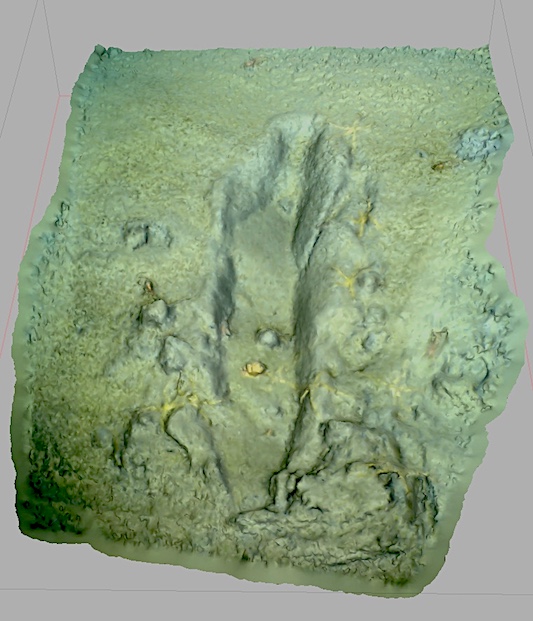 A three-dimensional image, created by Lonny using ROV video, of a gouge mark in the seafloor. The mark is about 14 centimeters.

During the transit to the slump scar, Lonny Lundsten, normally the scientist in charge of documenting the dives, had the opportunity to pilot the ROV for a few minutes. He did a great job!

As the ROV climbed the slump, we sampled and surveyed the exposed bedding layers. On the top of the slump we began to see more rocks and marine organisms that typically attach to hard surfaces, including a few crinoids and corals. This is indicative of the presence of buried cobbles. We collected one more cobble and one more push-core sample and recovered the ROV. 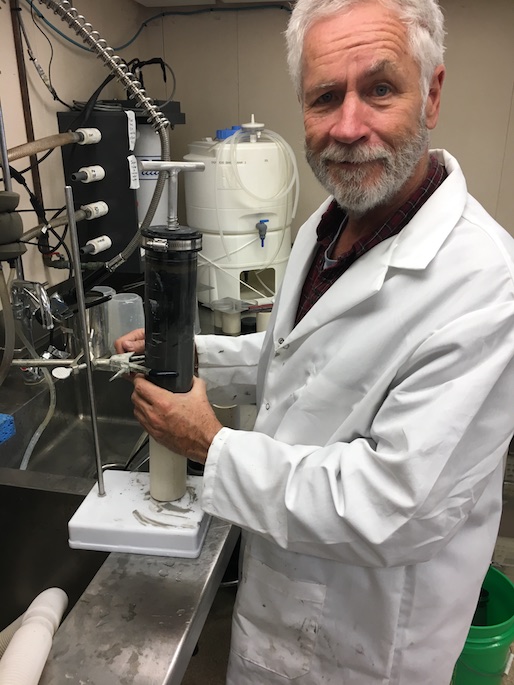 Upon surfacing, we retrieved and processed the cobble and core samples. For push-core samples, we measure, photograph, and describe the sedimentary layers. We then take one-centimeter slices of the cylindrical sediment core, then label them in bags for future analysis. 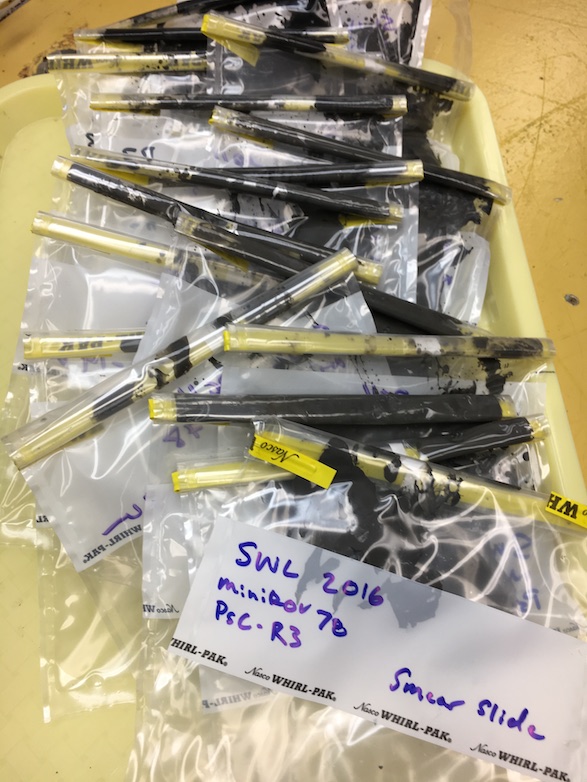 Once described and photographed, one-centimeter slices of the push-core samples are placed into bags and labeled for future analysis.