The search for methane in the water column 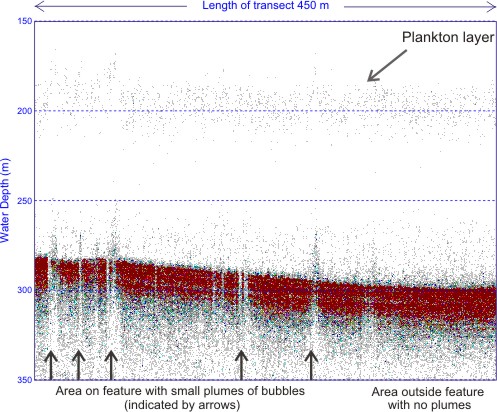 While the ROV and AUV surveys are the priorities for this research expedition, as per the multidisciplinary nature of this mission, we are constantly designing other science tasks that are undertaken as time allows. Investigating the release of methane into the water column from seafloor features is an additional area of interest for the scientists onboard. The main questions are: (1) Are the features where we have observed gas discharge in the past still discharging gas?, (2) How far up the water column does the methane travel, and does any of the methane reach the atmosphere?, and (3) What is the concentration of methane in the water column from these features?

In an attempt to answer these questions, we image the water column for indicators of bubbles using a sounder mounted on the hull of the ship. We also use the Fisheries and Oceans Canada CTD (conductivity, temperature, and depth) rosette, which has 24 sampling bottles. The CTD instrument measures the conductivity and temperature of the water column, and the bottles are triggered to sample at various depths. Water samples are placed  in small glass bottles that will preserve any methane dissolved in the water. The samples will then be analyzed for methane concentration by Laura Lapham at the University of Maryland. But first we have to survey the features to see if there is anything to sample!

After the AUVs were deployed, there was finally a window to do a CTD rosette cast. We transited to a feature we call “Coke Cap,” named so because it has the shape of a bottle cap. In 2012, Chief Scientist Humfrey Melling deployed a mooring with a sonar system that imaged the seafloor at this site. He found that this feature periodically emitted gas, much like a “burp.” Our first step was to conduct a short survey of the feature with the 12 kHz sounder so we could image the water and look for gas emissions from the seafloor. We were a bit disappointed that it appeared to be a quiet time for the feature with no dramatic plume of bubbles visible in the sounder data. But there was evidence for small bubble plumes, so we chose our location and the vessel was positioned for our CTD/rosette cast.

We triggered 18 bottles in the depth range of five to 280 meters—that was the fun part!  Once the rosette was back on deck, the more laborious task of sampling the water took place. We currently have no results to report since we have to wait for the samples to be analyzed in the lab. We hope to have time to survey and sample more features, but with the AUV and ROV missions producing such high-quality, interesting data, we may have to complete this task on a future cruise.