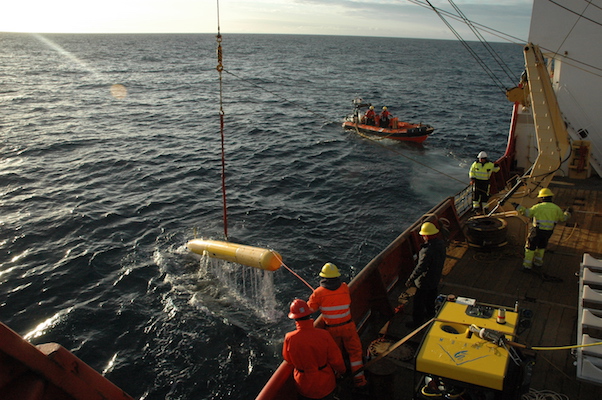 Autonomous underwater vehicle (AUV) and remotely operated vehicle (ROV) operations are now underway. Our team has developed a rhythm and the crew of the Sir Wilfrid Laurier (SWL) is expertly handling AUV and ROV deployments. There is an ongoing dance between the various scientific elements of this expedition to integrate the mooring work, CTD casts, AUV mapping, and ROV dives. With each new expedition there is a learning curve for ship crew members, scientists, and ROV/AUV engineers. When everyone gets into the rhythm, the dance becomes increasingly graceful.

We begin each day recovering an AUV that was deployed the previous evening. We then quickly get on station and prepare the MiniROV for deployment. We complete ROV operations in the afternoon or early evening, then prepare the AUVs for another evening dive and try to fit in other science objectives such as mooring retrieval/deployment and CTD/water-sampling casts. Things that can alter the general outline of these plans are vehicle or component failures, bad weather, and inadequate communication.

Today’s AUV recovery was executed flawlessly by the ship’s crew. A small boat was used to grab and tow the AUV from its surface location to ship-based tag lines and the crane hook. Once hooked, the small boat exits swiftly, leaving the AUV for the ship crew to bring aboard, cradle, and tie down.

After this morning’s AUV recovery, the ROV engineers readied the MiniROV for our second dive to the 420-meter-deep mud volcano. Similar to yesterday’s dive, we had several scientific objectives for this dive. Once the MiniROV reached the seafloor, we deployed our second OsmoSampler, took ambient water and sub-seafloor temperature measurements, then collected three push cores. Next we “flew” a 400-meter-deep transect across the mud volcano to collect video for biological analysis and to visually identify contacts between different ages of seafloor.

While transecting, we received exciting news from Dave Caress: he had just completed the initial processing of the data collected during the previous night’s AUV mission and brought us the new map. It showed very clear differences in structure from mapping efforts of just a few years prior, and our dive was in an area of notable change. This led us to change course mid-dive to ground truth the newly revealed structural differences. Even more exciting, the final push core that was collected on this dive contained gas hydrate, an ice-like structure of methane and water, which began disassociating within the core once at the surface, creating noticeable expanding pockets of gas and visible bubbling.

We had an excellent day of sampling and the dance continues…we plan on deploying two AUVs for night operations shortly.