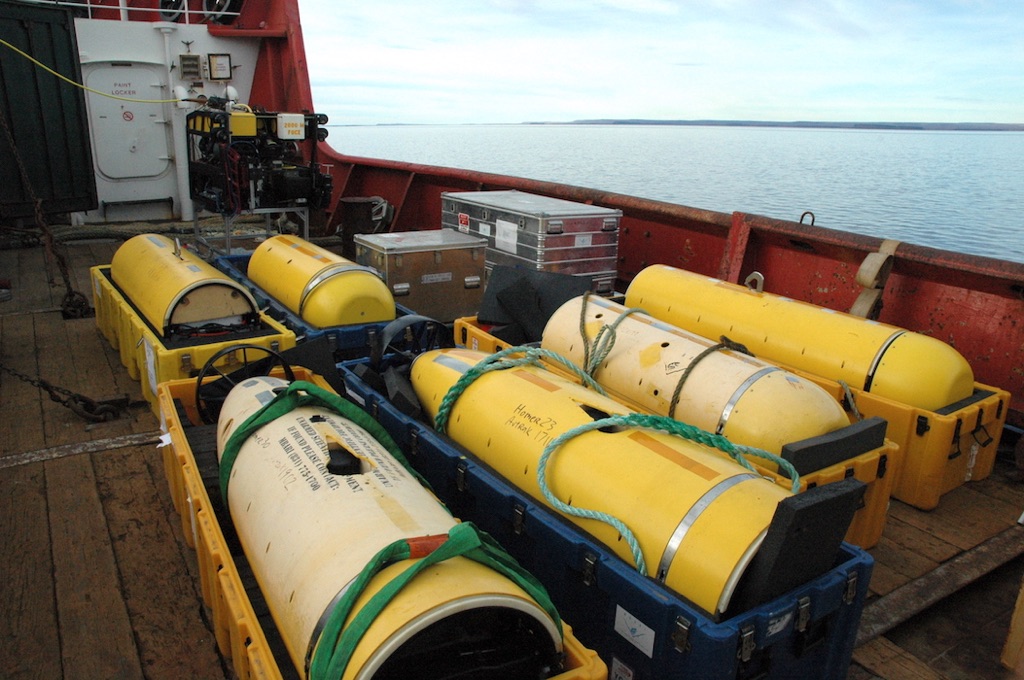 Today we sailed towards Kugluktuk, Canada, for a refueling stop alongside a Canadian fuel tanker. We sailed past the icebreaker CCGS Louis S. St-Laurent.

While in transit, MBARI technicians and Canadian Coast Guard crew members hauled out gear from the hold and onto the well deck for assembly. MiniROV pilots Dale Graves, Frank Flores, and Ben Erwin readied the MiniROV and dry tested the camera, as well as video recording and other ROV functions.

AUV engineeers Hans Thomas and Erik Trauschke began charging batteries and sealing the glass spheres that house battery packs, computers, and instrumentation, in an effort to ready the AUVs for service. Geoscientist Dave Caress spent much of the day developing code for MB-System, a seafloor mapping data processing software package, which is used to process the AUV-collected bathymetric data that we will begin collecting very soon.

During refueling operations, Canadian and MBARI scientists took a small boat to a rocky island off Kugluktuk with a twofold mission. One goal was to calibrate the compasses on the acoustic Doppler current profilers (ADCPs), which will be deployed over winter on moorings throughout the region to track the currents and surface ice cover. The second effort was to retrieve samples of rocks from the surface of the small, uninhabited island that were dropped when Pleistocene glaciers melted at the end of the last ice age some 12,000 years ago. The mixtures of rock types that were collected provide a “fingerprint” to their source and the direction the glacier was moving. A specific goal is to compare these samples with deposits previously sampled from the shelf edge of the Beaufort Sea, where we are headed next.