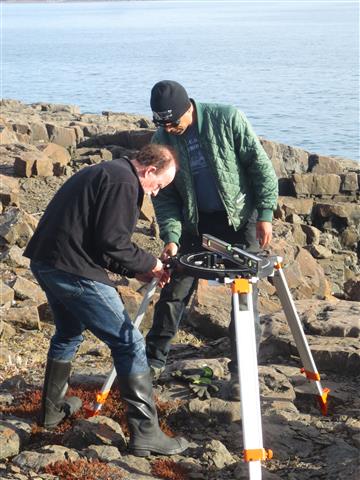 The principal activities conducted during this expedition on Sir Wilfrid Laurier are led by Chief Scientist Humphrey Melling of Fisheries and Oceans Canada. These activities include the servicing of subsea oceanographic instruments and moorings for ocean and sea‐ice monitoring, CTD rosette casts at selected locations, and continuous underway measurement of surface seawater accessed via a pumped thermo‐salinograph. Observations made by instruments mounted on these oceanographic moorings provide continuous year‐round ocean data that complement the detailed, but short‐lived, surveys conducted from ships. The moorings enable affordable long‐term monitoring of the seas surrounding Arctic Canada.

Some of the instruments in the mooring packages have a compass that needs to be calibrated.  We went ashore on a rocky island in the bay near Kugluktuk on a beautiful afternoon to calibrate the compass.

The instruments used on these moorings acquire intriguing and ecosystem‐relevant views of the polar ocean at times of the year when humans are not there to see them. Upward‐looking sonar at the moorings’ tops measures ice thickness and topography, revealing the presence of ridges, level ice, and ecologically important leads; the sonar activates an interleaved second mode in summer to measure storm waves and surges (important to ocean mixing and to safety on shore and at sea).