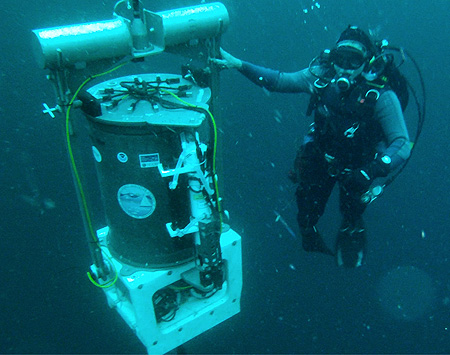 In May 2015, as part of a large-scale experiment, ocean researchers measured some of the highest concentrations of harmful algae and their toxin ever observed in Monterey Bay. For the last month, MBARI researchers have been collaborating with scientists from half a dozen other research organizations to study the growth of harmful algae in Monterey Bay. Some of the primary targets of this research are diatoms (microscopic algae) in the genus Pseudo-nitzschia, which produce a potent neurotoxin called domoic acid.

Periodic blooms of Pseudo-nitzschia diatoms have been documented for over 25 years in Monterey Bay and elsewhere along the US West Coast. In some cases, these blooms have led to the deaths of sea birds or marine mammals by domoic acid poisoning.

Domoic acid is concentrated in the bodies of animals that eat diatoms, including some shellfish, crustaceans, and small fish such as anchovies. Sea lions and seabirds such as pelicans can be exposed to domoic acid when they eat these smaller animals.

During the May 2015 experiments, researchers measured concentrations of diatoms in the bay, as well as concentrations of domoic acid associated with these diatoms. Researchers at MBARI made these measurements using robotic instruments called Environmental Sample Processors (ESPs). Developed at MBARI over the last 15 years, ESPs are “biochemistry labs in a can” that can be deployed on ocean moorings to detect different types of algae or other micro-organisms, as well as some toxins, and send the results back to shore within an hour. For this experiment, the ESPs were equipped with a special sensor to detect domoic acid, which was developed in collaboration with researchers at the National Oceanic and Atmospheric Administration’s National Center for Coastal Ocean Science.

Complementing the data from the ESPs, researchers at the University of California, Santa Cruz (UCSC) used laboratory techniques to measure concentrations of Pseudo-nitzschia diatoms and domoic acid in water and in animals collected from the bay. Researchers from Moss Landing Marine Laboratories helped collect animals and water samples for analysis, and are working with UCSC to monitor blooms in the bay.

Throughout the month, concentrations of domoic acid waxed and waned as diatoms bloomed, died-off, and were carried around the bay by currents. During a normal Pseudo-nitzschia bloom, domoic-acid concentrations of 1,000 nanograms per liter would be considered high. However, by mid May concentrations in Monterey Bay reached 10 to 30 times this level.

On May 27, 2015, very high levels of Pseudo-nitzschia diatoms and domoic acid were found in dead anchovies on the beach at Moss Landing. The researchers do not know if the anchovies died because of domoic acid poisoning. However, scientists have not seen such high concentrations of domoic acid in anchovies since 2000, during a previous study of harmful algal blooms. The researchers have shared these observations with federal and state agencies involved in public health and fisheries management.

The research team hopes to expand its measurements of domoic acid to include other animals in the bay. Given the high concentrations in the water and in the anchovies, they are concerned that sea birds and marine mammals might be affected over the coming weeks.

The May 2015 research was conducted during two large collaborative research projects that were conducted simultaneously in Monterey Bay. One of these was MBARI’s Spring 2015 Controlled, Agile, and Novel Observing Network (CANON) experiment. Over the past five years, CANON experiments have documented ocean currents, chemistry, and biology using automated instruments attached to moorings and drifters, as well as coordinated fleets of underwater robots. The CANON team is developing new tools to help researchers understand how ocean currents and changes in ocean chemistry may trigger harmful algal blooms.

The CANON researchers worked closely with a team of researchers funded through the National Oceanic and Atmospheric Administration’s “Ecology & Oceanography of Harmful Algal Blooms” (ECOHAB) program, and led by Raphael Kudela at the University of California, Santa Cruz. Many other groups also participated in ECOHAB, including the US National Centers for Coastal and Ocean Science; MBARI; Moss Landing Marine Laboratories; the University of California Los Angeles; the Southern California Coastal Water Research Project; the Southern California Ocean Observing System; and the Central and Northern California Ocean Observing System.