The CANON experiments – Tracking algal blooms by “going with the flow”

In mid-September a small fleet of ships and robotic submersibles performed a novel experiment about 160 kilometers (100 miles) off the Central California coast. The vessels spent most of their time circling around a floating robotic DNA lab, which drifted southward in the California Current. This research, part of MBARI’s CANON (Controlled, Agile, and Novel Observing Network) project, is all about “going with the flow”—tracking and studying how communities of microscopic marine organisms change as they are transported by ocean currents. 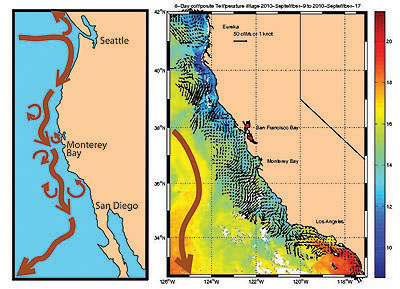 The left-hand illustration above shows a generalized diagram of the California Current, as it meanders down the West Coast of North America, generating transitory eddies on its east and west flanks. The right-hand illustration shows sea-surface temperatures off Central California during the September 2010 CANON experiment (Base image created by CeNCOOS from MODIS satellite imagery). Warm water is red; cold water is blue; black arrows indicate surface currents. The dark red line in the right image highlights what may be a meander in the California Current.

Led by MBARI biological oceanographer Francisco Chavez, during September, CANON researchers studied open-ocean water in the California Current, a meandering band of water that flows southeastward from Oregon to Northern Baja California. In October, a much larger cohort of  researchers is studying the highly productive, but rapidly changing nearshore environment of Monterey Bay.

These two field experiments pose different challenges and opportunities for ocean researchers. Studying the offshore waters is challenging because humans and robotic vehicles must travel long distances and remain at sea for weeks at a time. Life in these offshore waters is often dominated by tiny organisms that are difficult to see even under a high-powered microscope, and often cannot be grown in the laboratory. These tiny organisms feed life in the ocean and have a strong influence on Earth’s climate because they are so widespread.

Nearshore waters are more accessible to scientists and harbor dense populations of algae and other micro-organisms, as well as larger animals. However, this environment is affected by a web of complex interactions between the ocean, atmosphere, seafloor, land, runoff, and human activities. Because of these diverse influences, winds, currents, waves, and chemical and biological conditions often change rapidly, over periods of hours to days. This often makes it difficult for scientists to track and study ephemeral ocean features, such as algal blooms.

During both the nearshore and offshore experiments, CANON researchers simultaneously collected data on the physical and chemical properties of the ocean, along with detailed information on the algae, bacteria, and microscopic animals present. The researchers also measured the abundance of key organisms, determined how fast they were growing, and estimated how fast they were dying off or being consumed. Gathering all of this information simultaneously provides a more comprehensive picture of how the physical and chemical properties of the ocean affect the growth of entire communities of microscopic organisms.

Observing the microscopic life in moving water for more than a few hours is no easy feat. However, the CANON project builds on MBARI’s previous large-scale, multi-instrument, multi-institutional field programs, such as the Autonomous Ocean Sampling Network (AOSN). In contrast to these previous experiments, however, the CANON experiments focus on biological as well as physical processes. 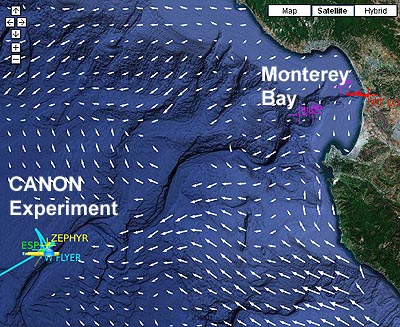 This illustration shows the location of the September CANON experiment relative to Monterey Bay. White arrows indicate currents. The positions of the drifting Environmental Sample Processor (ESP), the R/V Western Flyer, and the R/V Zephyr are shown in the lower left corner of the image. The goal of the experiment was to deploy the ESP so that it would drift within the eastern portion of the California Current.

The September experiment: Drifting with the California Current

The first CANON field experiment began on September 9, 2010, when MBARI’s flagship research vessel, the Western Flyer, headed westward from Moss Landing. The ship first headed west until it was 350 miles offshore, collecting water samples along the way. After analyzing these seawater samples and comparing them with satellite images of sea-surface temperature, the researchers attempted to locate the ever-changing boundaries of the California Current.

After completing this lengthy transect, the Western Flyer headed back toward the eastern (shoreward) boundary of the California Current, about 160 kilometers (100 miles) from the coast. There it met up with the research vessel Zephyr, host ship for MBARI’s autonomous underwater vehicles (AUVs). 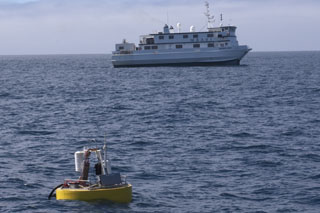 This photo shows the drifting Environmental Sample Processor (in the foreground) being followed by the research vessel Western Flyer. Image: Phil Sammet © 2010 MBARI

Once “on station” in the California Current, researchers on board the Western Flyer deployed a large, drifting buoy carrying a robotic DNA lab known as the Environmental Sample Processor (ESP). The Zephyr then deployed MBARI’s upper-water-column AUV. At this point the field experiment began.

Drifting southward within the California Current, the ESP began automatically collecting water samples and analyzing the DNA of microscopic organisms within these samples. The Western Flyer followed the ESP as it drifted, allowing researchers to download data from the ESP and to collect water samples for later analysis on shore. Meanwhile, the AUV circled around the ESP, collecting detailed information about the physical and chemical properties of the water around it in real time.

The September CANON experiment involved a number of “firsts” for several research groups. For example, the ESP has been used in moored experiments for years, but this was the first time it collected data while drifting with the currents. In addition, the ESP was used not just to study genetic material, but to measure the amounts of important biological compounds generated by microscopic bacteria. This will help researchers understand how these bacteria are affecting the planktonic community and the rest of the food chain.

Similarly, programming MBARI’s AUV to swim in circles (actually boxes) around a moving object (the drifting ESP) was a very complicated task. This provided a serious test for the AUV’s automated planning and execution system, the Teleo-Reactive Executive (T-REX). 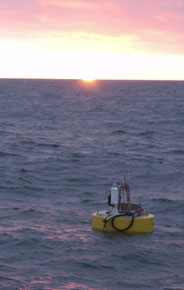 This photo shows the drifting Environmental Sample Processor at sunset. MBARI researchers spent over a week at sea during the September experiment, so they got to see many sunsets like this as they tracked the instrument. Image: Phil Sammet © 2010 MBARI

The drift experiment showed how complex a problem CANON is tackling. Waters were moving in different directions near the surface and just below, changing even further with depth. Had only a few days of information been collected it might have been impossible to discern what was going on. After the third day, however, the experiment started to pay off and scientists started to better understand on the complexities of the physical and chemical properties of the water. Observations showed that the photosynthetic community was dominated by very small organisms, termed picoplankton, and they were floating in relatively high levels of nitrate. The nitrate, however, was not getting utilized, and the picoplankton seemed to be using ammonia as its nitrogen source. This type of activity is common in waters that are iron-limited. Information collected previously suggested that this phenomena might occur in this part of the world during autumn but the extent of the region, covering hundreds of square kilometers surprised the CANON scientists.

Research organizations participating in the project include the University of Washington (genomics) and the Massachusetts Institute of Technology (genomics). The Central and Northern California Ocean Observing System (CeNCOOS) will help get information from these experiments out to policy makers, marine resource managers, and the public.