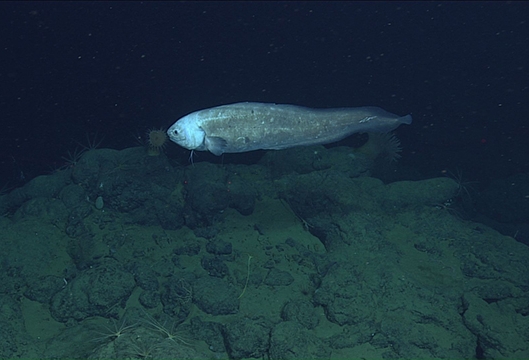 Today we split the science team to run ROV operations while preparing to relaunch our large, physical oceanography mooring. That allowed us to have an extra exploration dive at Davidson Seamount today. There is always a special excitement about exploration dives because we get to view areas that no human eyes have ever seen before, with the potential of making exciting new discoveries.

We decided to dive in the southwest section of Davidson Seamount, starting at 3,200 meters (10,500 feet) deep. This is one of the deepest areas of the Monterey Bay National Marine Sanctuary, and the sediment looked somewhat tropical in the lights of the ROV, lighter in color and more “fluffy” than other areas that we frequent. We immediately came across large gouges in the seafloor—over one to two meters (five to six feet) long, 18 centimeters (seven inches) deep—with sediment piled up along the edges. Some of these features were “fresh,” with sharp edges, while others seemed older, with smooth delineations. The control room was abuzz with hypotheses on what could create such features, and we investigated online scientific literature. In the end, we believe it’s likely that beaked whales are feeding in the area, carving the gouges as they pin large fish to the seafloor. Giant cusk-eels, over four feet long, are common in this area along with grenadier fishes, which have been found in the stomachs of beached beaked whales. Sperm, fin, blue, and humpback whales are often seen above Davidson Seamount, and now it seems that the rarely-seen beaked whales (they have a low profile and dive for long periods of time) also use this marine protected area.

This newly-explored area is also home to large sea spiders, sea stars the size of bucket lids, and the ghost-like, high-fin lizardfish. When small rocks were present along the muddy seafloor, black corals and sponges often took advantage of them for living space. We also came across a spectacular, stepped, mud cliff, over 30 meters (100 feet) tall. Sadly, even at this remote location, we observed the impact of humans—a small pile of assorted metal objects.

When we reached the volcanic edge of Davidson Seamount, black corals and tall, straight bamboo corals were present, but not abundant. In fact, the rocky area was surprisingly devoid of sea life. We came across one octopus that we thought might be a continuation of the octopus garden on a southern bank of Davidson Seamount, but it was a lone individual of a different species and was not brooding eggs.

Later, on the muddy bottom, we came across a favorite species of ours, the pom pom anemone, and a surprising amount of kelp that managed to drift down to 3,050 meters (10,000 feet), 128 kilometers (80 miles) from shore. As we ended our dive, we took water samples to analyze for environmental DNA. We can compare DNA left behind by organisms living in the area to a catalogue to let us know what lives in this area that we may have missed with our remotely operated vehicle. What a wonderful and memorable way to spend a day!