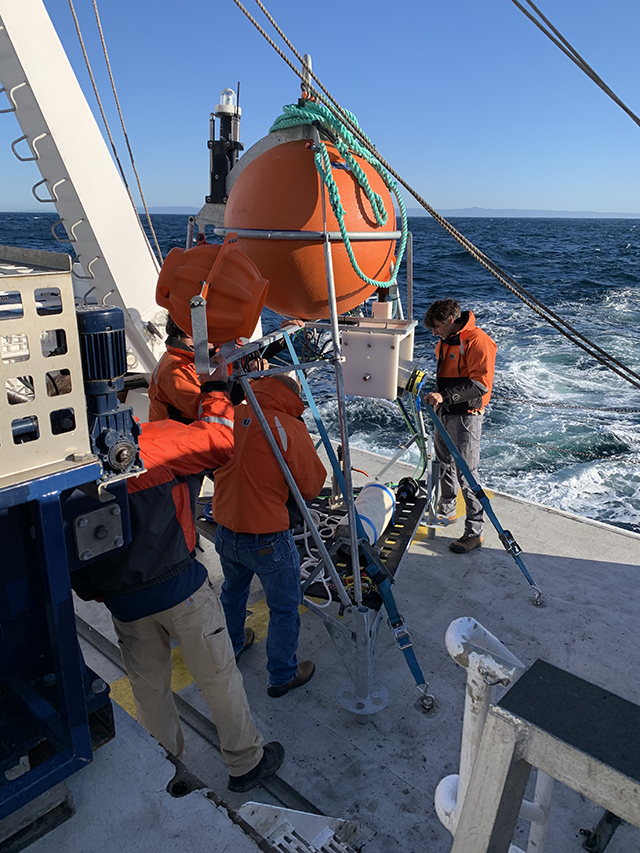 Gearing up to deploy the Deep Coral Cam.

After months of preparation and a full day of loading equipment, the crew boarded R/V Western Flyer at 4:00 a.m. Our main destination for the research cruise is Sur Ridge and its dense forests of deep-sea corals and sponges. Sur Ridge is located 45 kilometers (28 miles) west of Point Sur, near the center of the Monterey Bay National Marine Sanctuary (MBNMS), and four hours from our home port of Moss Landing, California. Chief Scientist Jim Barry is leading a team from MBARI, MBNMS, and Moss Landing Marine Labs to continue to build on a deep-sea coral observatory. This research incudes placing instruments that measure currents and assess food availability, while also making visual observations with ROV Doc Ricketts. We want to learn what it takes for deep-sea corals to survive and thrive for hundreds to thousands of years, and what their role is in this spectacular deep-sea ecosystem. Formal plans were set aside for day one of the six-day cruise, as the rough weather dictated that we would not be launching the Doc Ricketts; however, we could make good use of our time by deploying and retrieving equipment.

MBARI engineers and scientists have developed the Deep Coral Cam to record what happens to and around corals over longer periods of time. The Deep Coral Cam takes an image at intervals that we select, and then thousands of images can be viewed in sequence as a movie or individually. Our initial, brief effort with the coral-cam showed exciting potential as we could see fishes “sitting” near corals and sponges while sea stars (some known predators on corals) roam the area and corals sway with changing currents. Today we successfully launched the Deep Coral Cam, and will be adjusting its position to best view coral communities when we are able to visit it with the Doc Ricketts.

We were also able to retrieve two particle traps today. These cone-shaped instruments collect marine snow, pieces of organic matter that float down from the sea surface and midwater areas. Marine snow moves carbon into the deep sea, and is a source of food for many animals, including deep-sea corals. The particle traps switch collecting chambers every three days (or as often as we chose) so we can assess changes in marine snowfall through time. One cone was positioned 15 meters (16.4 feet) and the second cone was 550 meters (1,804 feet) above the seafloor, with a current meter placed in between the two cones.

After being in place for three months, the particle trap mooring was retrieved by sending a sound signal to a release mechanism above the anchor so floats can lift all of the line and instruments to the surface. We can’t use Styrofoam floats at 1,200 meters (3,937 feet) because they would be crushed by the pressure, so our floats are made of glass balls, the size of bowling balls, encased in shockproof plastic containers. Getting the mooring on deck safely took a carefully orchestrated team of a winch operator, deckhands, and scientists, all wearing safety helmets, life jackets, and steel-toed boots.

After the particle samples were stored and the equipment properly lashed down on deck, activities moved into the dry lab. Plans are being made to re-deploy the particle traps and to select ROV dive locations for tomorrow. The captain decided to bring the Western Flyer closer to shore for the night, just off of Pebble Beach Golf Course, to avoid larger ocean swells and high winds. Today was a success, and were all excited for a new adventure tomorrow.