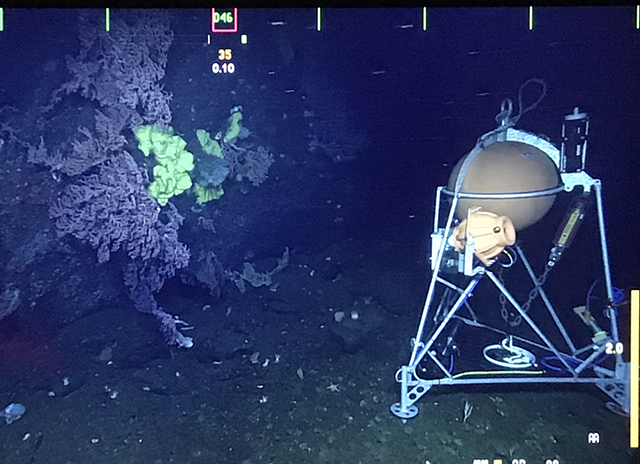 After two days working at Davidson Seamount it was time to return to Sur Ridge to find the Deep Coral Cam we dropped off on the first day of the cruise and move it to the spot where it will spend the next nine months. Before heading to Sur Ridge, we steamed back to Monterey to pick up Paul McGill and Alana Sherman, two of the engineers working on the Deep-Sea Coral Observatory (DiSCO) project and who lead the development of the Deep Coral Cam. We don’t bring the Western Flyer back into port to swap crew; instead, we send an inflatable skiff to shore. It is a ton of fun speeding along the water to meet the Western Flyer then being lifted by crane onto the deck. Definitely a unique way to get on a ship!

After we picked up the engineers it was time to head off to Sur Ridge. We loaded up the ROV Doc Ricketts with an acoustic Doppler current profiler (ADCP) and two Nortek Aquadopps, instruments used to measure currents and flow around the corals and sponges we will image with the Deep Coral Cam. Flow, food, and habitat are thought to be major factors determining where we see deep-water corals and sponges, so ADCPs and Aquadopps are an important part of the DiSCO project.

As the Doc Ricketts decended 1,200 meters (4,000 feet) to the bottom of Sur Ridge, we decided where to place the Deep Coral Cam. Of course the site would have to have coral, but the bottom also needed to be relatively flat and not too rocky, plus have room for the Deep Coral Cam—which is three meters (10 feet) tall and almost as wide—and the ROV. We scouted three of the our “marked” sites— coral habitats we have monitored over time—then decided on “The Rock”, a giant boulder covered in corals and sponges. Thanks to the acoustic transponder on the Deep Coral- Cam, which allows us to pinpoint the position of the equipment underwater, we quickly located the camera, lifted it with ROV, and moved it to “The Rock”. We positioned the Deep Coral Cam in front of a scenic collection of animals, including large bubble gum corals, a Picasso sponge, and a bamboo coral. Once the ROV pilots carefully plugged the Deep Coral Cam into the ROV the engineers sprang into action, tilting the camera (housed in a titanium sphere) to best capture the corals and sponges and adjusting the exposure and the ISO to get the sharpest images.  After the camera was in position, we unplugged it from the ROV, placed the ADCP and the Aquadopps nearby, and the ROV headed back up to the surface.

Over the next nine months the Deep Coral Cam will take one picture every hour. This collection of almost 7,000 pictures will give us information on how coral and sponges interact with the environment and the other animals sharing their habitat over time. We are excited as to what these pictures will show since there is little known about day-to-day changes in coral and sponge ecosystems. 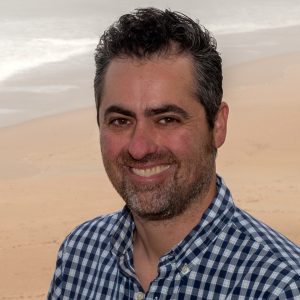