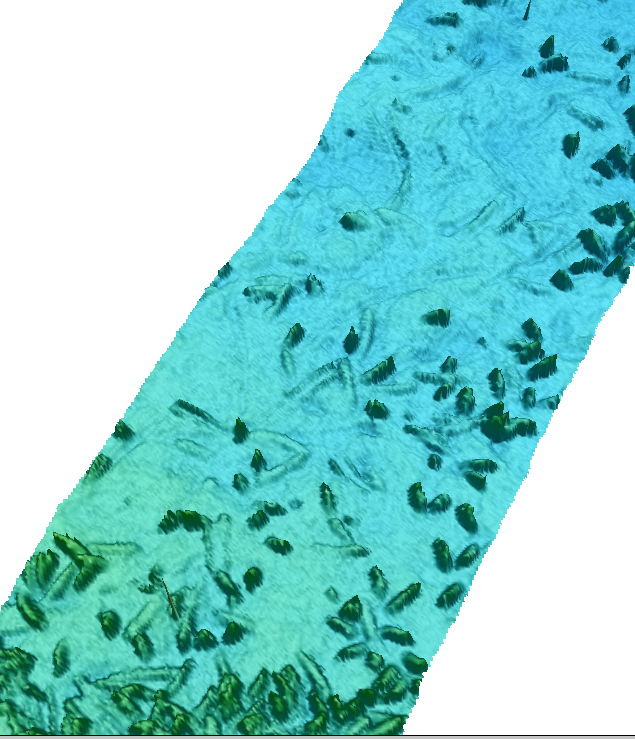 The raw data from the lidar surveys come in as points from each location where the laser beam hit the bottom, as seen in the images posted earlier in these logs. Postdoctoral Fellow Monica Schwehr then processes these data to create images such as the one above, revealing details as small as one centimeter in size. The green objects here are clams. Notice that the tracks made by the clams’ movement across the seafloor are evident in this image. The range of colors depict slight variation in, and simulated illumination was added to make it easier to see the objects. The width of this image represents a swath of the seafloor 1.6 meters wide. Click on image for larger version.

The work completed this week will be very helpful for Scientist Charlie Paull as he plans his Western Flyer expedition scheduled for next month. Paull’s team will be collecting instruments placed in the canyon for the Coordinated Canyon Experiment, and will collect samples at key locations in the canyon. The images and maps from this week will help his group determine where to take sediment cores.

As for the Ocean Imaging Group, they will be back out at sea later this year to test and refine a new version of the survey system designed to efficiently map steep slopes as well as flat regions like the canyon bottom. Team members Eric Martin, Andy Hamilton, and Larry Bird have designed and built a frame that allows the imaging instruments to tilt to follow the shape of the seafloor, even up to vertical cliffs. Next year they plan to use the improved system to survey a lush coral and sponge community on Sur Ridge in the Monterey Bay National Marine Sanctuary. Following that expedition, the imaging system will be taken to the Pescadero Basin in the Gulf of California to survey hydrothermal vents discovered by MBARI in 2015.

The smooth operation this week of a very complicated array of imaging systems is the result of more than six years of development, sea trials, expeditions, and successive improvements. Only a part of the team that made this possible came out on this expedition—David Caress, Eric Martin, Mike Risi, Erik Trauschke, and Monica Schwehr. Hans Thomas, Rich Henthorn, and Brett Hobson were integral to the pre-expedition preparations. See the full project team at the bottom of this page.