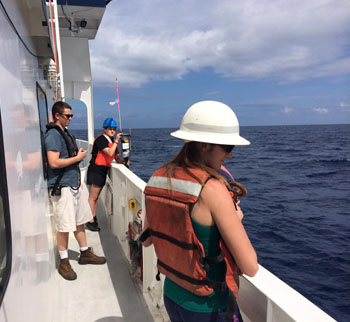 It’s 9:30 p.m. on our first day at the time-series station. Fifteen hours ago we were all on deck, ready to begin our dawn cast. As I had predicted last night, the nervousness proved to be for nothing—or maybe it’s what kept us on our toes—but the cast went off without a hitch.

Following the standard CTD cast at dawn, we made the second pump cast of the expedition. I mentioned previously that Gernot Friederich designed this method of pumping water directly onto the ship without the use of Niskin bottles. Today I learned a little bit more about the work he does analyzing the water samples he collects from Martín Hernández. Gernot is producing the first detailed profile of the ocean carbon system with very fine, high-resolution measures of pH, partial pressure of carbon dioxide, dissolved inorganic carbon, and a wide array of nutrients. That, Martin says, in combination with a fast repetition rate fluorometer that measures phytoplankton concentration, health, and activity, is something that no one in the world of oceanography has done before.

Immediately after the pump cast, we deployed a floating sediment trap. The trap is lowered 70 meters into the water, intended to capture the falling organic particles generated by biological activity at the surface. These particles fuel the microbial nitrogen transformations at the core of this expedition’s studies—the nitrogen cycle in and above low-oxygen waters. The trap will drift for 24 hours, attached to a small buoy that gives us the trap’s exact location using GPS and satellite transmission technology.

Noon and dusk casts were also made later in the day, following our schedule of casts every six hours. Now, I have to try to take a nap before I’m back on deck in a couple hours for my shift on the midnight cast. No one will be getting much sleep for the next few days.