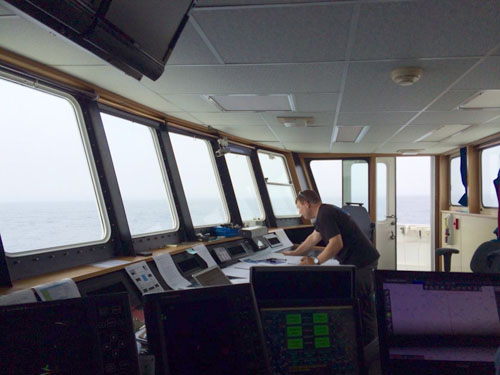 Andrew McKee at work in the bridge.

Passing the time in transit

Today was an unusual day for the scientists aboard the Western Flyer—we made no new casts and spent the entire day in transit. Travelling at about 10 nautical miles per hour since leaving M1 yesterday, we are now off the coast of San Diego. We are making good time even with an unexpected detour earlier today. The ship’s captain, Andrew McKee, received a call from the Navy this morning informing him that the Western Flyer needed to steer nine miles off course because of a naval exercise that would be taking place near the Channel Islands. This is a reminder that we aren’t out here alone, although it sometimes feels that way as I look out at the seemingly vacant waters around us.

The scientists took advantage of the downtime this evening to share with one another a more in-depth look at their objectives for this leg of the expedition. First, Francisco Chavez, the chief scientist, shared a preliminary comparison of the data collected yesterday at M1 with the data collected at this same site during the 2012 expedition to Mexico. The water yesterday was significantly warmer and fresher (lower in salinity) and had more oxygen than in 2012.

He was followed by Ryan Paerl, a postdoctoral fellow at the University of Copenhagen, who became interested in the limitation of primary production and bacterial production around Monterey Bay and in the Gulf of California. He is also interested in testing old and new approaches to measuring nitrogen fixation in these waters.

Jason Smith, a postdoctoral fellow at MBARI, then spoke about the experiments he is performing on the cycling of nitrogen in Alta and Baja California including nitrification, the process by which microorganisms convert ammonium to nitrate. He is also testing a new in situ incubation system.

Tomorrow morning the long day of travel pays off.  We make our first port call at 0800 hours in Ensenada, Mexico!