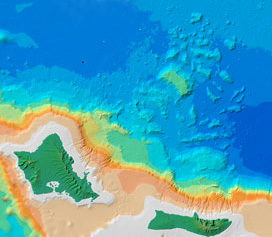 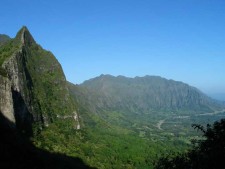 Pali above Kane’ohe Bay on Oahu: the slide-scarp of the Nuuanu landslide. Photo © 2004 J.B. Paduan

Hawaiian landslides have been catastrophic

Volcanic activity and gentle erosion have not been the only forces to shape the Hawaiian islands. Landslide debris has now been mapped off of all the islands. Enormous amounts of material have traveled great distances, indicating that the slides were truly catastrophic. The Nuuanu and Wailau landslides, shown in the map, tore the volcanoes forming eastern Oahu and northern Molokai, respectively, in half, and deposited blocks large enough to have been given names as seamounts. Tsunamis generated during these slides would have been devastating around the entire Pacific Basin. (See the coral reefs page for evidence that an enormous tsunami hit the shores of Lanai.)

Our research on Hawaiian landslides

MAUNA LOA – Four new remotely operated vehicle dives carried out by Monterey Bay Aquarium Research Institute (MBARI) reveal a heterogeneous distribution of lithologies and compositions along a transect across the submarine west flank of Mauna Loa, from the outer scarp of the frontal bench to the upper flank. The frontal bench is composed predominantly of volcaniclastic sediments, ranging from very fine-grained monomictic hyaloclastites to coarse-grained, compositionally mixed volcaniclastic breccias. The predominance of subaerially derived clasts suggests accumulations of landslide deposits, probably emplaced along a regional shear plane preserved in cataclastic breccias with local foliations and grain trails. Repeated packages of inversely graded strata are interpreted to reflect thrust imbrication of the resulting volcaniclastic apron during volcanic spreading of Mauna Loa’s western flank, similar to that now documented along Kīlauea’s south flank. Many of the rocks from the bench show evidence for alteration, ranging from low-grade burial diagenesis to higher-grade hydrothermal alteration, including phases never before observed in submarine Hawaiian rocks, including epidote, talc, sphene, and corrensite. Alteration is concentrated in deformed zones, denoting pathways for fluid flow into or out of the volcanic edifice. Formed at depth, the altered rocks were subsequently transported along low-angle thrust faults into the bench and exposed along high-angle fractures and faults. The upper submarine flanks are draped by subaerially erupted, submarine emplaced pillow lavas and interbedded hyaloclastites, generated by shoreline-crossing lava flows. Basalt glasses indicate Mauna Loa origin but imply earlier compositions than present-day lavas, consistent with Ar-Ar ages suggesting eruption 0.28 ± 0.10 Ma. Late stage detachment of a nearshore slump produced the ‘Ālika 2 debris avalanche that broke through the frontal bench, perhaps portending the evolution of the active Hilina slump now present on Kīlauea volcano’s south flank.

MAUNA LOA – A transect of four ROV Tiburon dives across the submarine west flank of Mauna Loa volcano yields compelling evidence for volcanic spreading and associated hydrothermal circulation during volcano growth. A frontal bench at the toe of the flank, formerly thought to be a downdropped block of Mauna Loa, contains a mix of volcaniclastic lithologies, including distally derived siltstone, mudstone, and hyaloclastite. The bench is overlain by bedded gravels and subaerially erupted pillow flows derived from local shoreline-crossing lava flows. The volcaniclastic strata in the bench were offscraped, uplifted, and accreted to the edge of the flank, as it plowed seaward into the surrounding moat. The accreted strata underwent significant diagenesis, through deep burial and circulation of hydrothermal fluids expelled from porous sediments beneath the volcano. Timing constraints for bench growth and breakup suggest that catastrophic failure of the subaerial edifice ca. 250–200 ka triggered volcanic spreading by reducing stresses resisting basal sliding and rift-zone inflation. Increased eruptive activity, and westward migration of Mauna Loa’s southwest rift zone, gradually rebuilt the massive flank, arresting slip prior to detachment of the Alika 2 debris avalanche ca. 120 ka.

OAHU – Wai’anae Volcano comprises the western half of O’ahu Island, but until recently little was known about the submarine portion of this volcano. Seven submersible dives conducted in 2001 and 2002, and multibeam bathymetry offshore of Wai’anae provide evidence pertaining to the overall growth of the volcano’s edifice as well as the timing of collapses that formed the Wai’anae slump complex.

A prominent slope break at ~1400 meters below sea level marks the paleoshoreline of Wai’anae at the end of its shield-building stage and wraps around Ka’ena Ridge, suggesting that this may have been an extension of Wai’anae’s northwest rift zone. Subaerially erupted tholeiitic lavas were collected from a small shield along the crest of Ka’ena Ridge, now submerged. To the south, tholeiitic pillow lavas have been recovered 65 km from the volcano’s center, indicating the south rift zone extended at least this distance. Sediment cores collected from north of Ka’ena Ridge contain pelagic sediment with volcaniclastic grains and volcanic glass that originated from Wai’anae’s postshield stage and eastern Oahu’s Ko’olau Volcano’s shield stage, respectively.

Multiple collapses and deformation events occurred during and after the shield stage, resulting in compound mass wasting features on the volcano’s southwest flank, the Wai’anae slump complex. This slump complex is the largest in Hawai’i, covering an area of ~5500 km2.  It is composed of several distinct sections based on morphology and lithologies of collected samples. The outer bench of the slump complex contains tholeiites that correlate with subaerial lavas erupted early during the volcano’s shield stage, from 3.9 to 3.5 million years ago (Ma), and probably formed during and shortly after the early shield stage. To the southwest of the outer bench lies a broad debris field of subaerially derived volcaniclastic rocks containing tholeiites with early shield compositions, interpreted to have formed by a catastrophic collapse event that breached the outer bench. The breach may have then been filled by slumping material from the main volcanic edifice.  Finally, on top of the northern main body of the slump is a rotated landslide block that detached from the proximal part of the Ka’ena Ridge after the volcano’s late shield stage (3.2 to 3.0 Ma), containing higher alkali rocks that correlate with late shield-stage subaerial lavas. None of the slump complex samples correlate with alkalic subaerial postshield lavas.

KILAUEA – Observations along the submarine south flank of Kilauea volcano have revealed the subsurface structure of active submarine slope failure and the remnants of an ancient landslide. New multichannel reflection data and high-resolution bathymetry provide this evidence, and suggest a dynamic interplay among slope failure, regrowth, and volcanic spreading. Disrupted strata along the upper reaches of Kilauea’s flank denote a coherent slump, correlated with the active Hilina fault zone on land. The slump comprises mostly slope sediments, underlain by a detachment 3-5 km deep. Extension and subsidence along the upper flank is compensated by uplift and folding of the slump toe, which surfaces about midway down the submarine flank. Uplift of strata forming Papa’u seamount and offset of surface features along the western boundary of Kilauea indicate that the slump has been displaced ~3km in a south-southeast direction. This trajectory matches coseismic and continuous ground displacements for the Hilina slump block on land, and contrasts with the southeast vergence of the rest of the creeping south flank. To the northeast, slope sediments are thinned and disrupted within a recessed region of the central flank due to catastrophic slope failure in the recent past. Debris from the collapsed flank was shed into the moat in front of Kilauea, building an extensive apron. Seaward sliding of Kilauea’s flank offscraped these deposits to build an extensive frontal bench. A broad basin formed behind the bench and above the embayed flank. Uplift and back tilting of young basin fill indicate recent, and possibly ongoing, bench growth. The Hilina slump now impinges upon the frontal bench; this buttress may tend to reduce the likelihood of future catastrophic detachment.

Conditions for landslides and canyon formation

MOLOKAI – The main break-in-slope on the northern submarine flank of Molokai at 1500 to 1250m depth is a shoreline feature that has been slightly modified by the Wailau landslide. Submarine canyons above the break-in-slope were subaerially carved. Where such canyons cross the break-in-slope, plunge pools may form by erosion from bedload carried down the canyons.

West Molokai Volcano’s continued infrequent eruptions formed a series of small coastal sea cliffs, now submerged, as the island subsided. Lavas exposed at the break-in-slope are subaerially erupted and emplaced tholeiitic shield lavas. Submarine rejuvenated-stage volcanic cones formed after the landslide took place and following at least 400-500m of subsidence after the main break-in-slope had formed. The sea cliff on east Molokai is not the headwall of the landslide, nor did it form entirely by erosion. It may mark the location of a listric fault similar to the Hilina faults on present-day Kilauea Volcano. The Wailau landslide occurred about 1.5 Ma and the Kalaupapa Peninsula most likely formed 330 +5ka. At their peak, West and East Molokai stood 1.6 and 3 km above sea level.

High rainfall causes high surface runoff and formation of canyons, and increases groundwater pressure that during dike intrusions may lead to flank failure. Active shield or postshield volcanism (with dikes injected along rift zones) and high rainfall appear to be two components needed to trigger the deep-seated giant Hawaiian landslides.

OAHU, MOLOKAI – The development of ideas on the giant Hawaiian landslides parallels improvements in the technology of bathymetric mapping and navigation. The landslides were first recognized in the 1960s in a relatively detailed U.S. Navy single-beam sonar survey utilizing an improved radio navigation system. The GLORIA multibeam side-scan sonar system (1980s) imaged unprecedented detail in the known landslides and revealed numerous other undiscovered ones. The JAMSTEC multibeam surveys (late 1990s), utilizing GPS navigation, produced detailed maps of the entire landslide area for the first time.

Volcaniclastic rocks on the flanks of landslide blocks

OAHU, MOLOKAI – The rocks exposed on the steep slopes of giant landslide blocks in the Nuuanu and Wailau landslides are fragmental rocks: hyaloclastite and volcaniclastic breccias. They form as 1) secondary slope mantling of unlithified breccia consisting of clasts in a mud matrix; 2) hyaloclastite and breccia, all with zeolite cement, that form downslope of the shoreline where lava flows enter the sea and fragment; and 3) breccia formed by tectonic fragmentation of glassy submarine-erupted pillow basalt. Lavas erupted from single volcanoes are highly variable in mayor-element composition, even during their tholeiitic shield stage, making it difficult to identify which landslide block was derived from which volcano. Low-temperature fluids circulate through the fragmental deposits on the flanks of the volcanoes, partially altering the glass to palagonite and cementing the volcaniclastic rocks with Na- and K-rich zeolites. Spreading of the volcano early in its history along low-angle thrust faults laterally transports deep submarine pillow lava into the flank of the volcano where it crops out as tectonic breccia. The faults underlying the landslide blocks are within this tectonized core of the volcano, not simply within the shallow slope deposits of hyaloclastite and breccia. The Nuuanu landslide predates the 1.5 Ma Wailau landslide.