Ctenophores (the “c” is silent, so it is pronounce “tee-no-fors”) are gelatinous marine predators that inhabit the ocean from the surface to great depths and one of the target species during this expedition.

Expedition goal: We are part of an international team of scientists collaborating on the MBARI- and NSF-funded Diversity, Ecology, and Ecophysiology of Ctenophores (DEEPC) project. Members of the team are working to answer questions about the biochemical, physiological, and genetic adaptations that these organisms have evolved to help them survive and diversify in the deep sea.

This 10-day expedition is taking place off the islands of Hawai’i on the R/V Kilo Moana, a twin-hull scientific research vessel that now holds scientists from the Monterey Bay Aquarium Research Institute (MBARI), Scripps Institution of Oceanography, Evergreen State College, Yale University, the University of South Florida, and the University of Gdansk, as well as all of the equipment and technology we need to study the different biological aspects of ctenophores. We have the MiniROV from MBARI, a Tucker trawl net, and blue-water scuba divers, all of which will collect samples (ctenophores and other gelatinous animals). Each tool collects animals in a different way and samples different environments, which allows us to answer a variety of questions. We will process all these animals on the ship, even running some experiments on them while we are at sea, while others will be preserved to study later.

Updates from researchers on the R/V Kilo Moana:

Our new favorite instrument is the MiniROV. The Mini has significantly increased our view into the ocean, especially at depth. When we participate in expeditions away from MBARI, we typically are limited to net tows and blue-water scuba diving. Both of these techniques are incredibly useful and we still employ them, however they are limited in what we can learn about the deep sea    .

The Mini has a suction nozzle with eight sample buckets, several high-definition cameras, numerous lights, and six thrusters that make it very nimble underwater. The ROV technology enables us not only to see the animals that the net captures during a tow, but also specifically target certain organisms for observation or collection. With the Mini, we can work both deeper to approximately 1,500 meters depth (4,920 feet), and for as long as 12 hours. This provides much more diving capability than our scuba divers, who are restricted to the top 20 meters (65 feet) of the water column for an hour at a time. Although we call her Mini, she is powerful and has some useful capabilities the larger ROV Doc Ricketts and Ventana don’t have, like two additional cameras that look out to the sides, so we have a 180-degree field of view. All of this can be packed up into shipping containers and can be sent to any ship of opportunity around the world. The Mini was designed and built by a very talented team of MBARI engineers, including Dale Graves, Alana Sherman, Chad Kecy, Mike Risi, Brian Schlining, Rich Schramm, and Frank Flores.

During this expedition, the Mini revealed an incredible diversity of ctenophores and siphonophores that could be distinguished as new or known species because they were observed and filmed at depth then captured intact. The trawl net catches many things, but it can be rough on delicate organisms. Even after our samplers were full, we spent time exploring the depths around the Hawaiian archipelago.

Due to unusual wind patterns, we were able to dive in the channel between Maui and the Big Island, where the winds usually howl through from the east. We called this the “land of giants” because we saw two species of ctenophore related to Thalassocalyce that were huge! Usually, the largest of these species are about the size of a grapefruit, but the individuals we saw were at least twice as big. Also there was a pyrosome (a colony of tiny bioluminescent, tube-like animals) that was about 1.5 meters (five feet) long, which is also much bigger than what we normally observe in Monterey Bay.

Although we have spent numerous hours exploring the open ocean off the coast of Hawaii, this expedition gave a much more complete view of biodiversity of deep tropical waters. Using the MiniROV, we were able to collect many known species that were great for population genetics and physiological studies as well as many new species yet to be described. Thanks to the Mini, we found and understand so much more.

Packing up the Kilo Moana. This is the van that houses the @MBARI_News mini ROV. #DEEPCHawaii2018 pic.twitter.com/FX9QKg4SRj

This year we are lucky to be able to participate in the blue-water scuba diving operations. It’s hard to describe the experience, but it’s kind of like floating in the most beautiful, ethereal, warm blue water. We use lines and clips to connect ourselves to a “trapeze” to ensure we don’t get separated from each other or the boat. Then we descend to 15 meters to begin collecting. Actually, collecting water-column organisms is hard! They are nearly invisible and good at escaping, so it takes some practice to successfully capture them. We use the lids of the jars to carefully “vacuum” ctenophores, siphonophores, radiolarians, and swimming snails (or whatever were looking for) into small glass jars. Once our jars are full or we run out of time we ascend to the surface and climb back onto the dive boat to return to the ship with our sparkly treasures.

During yesterday’s blue-water dive we successfully collected a few specimens of ctenophore called Eurhamphea vexilligera (E. vex for short, or when you are writing underwater). When our group was here last March, this was one of the dominant species we collected, but they were tiny. This year, they are less abundant, but “giant” (about the size of a business card—almost five centimeters). Well, maybe not giant, but this time we don’t need microscopes to identify them.

E. vex is special because it not only emits light along its comb rows but also secretes orange ink and blue-green luminous particles when it is disturbed. MBARI Postdoctoral Fellow Manabu Bessho-Uehara is studying the biochemistry of bioluminescence. He found that the light from the comb row diminishes quickly but the blue-green luminous particles continue twinkling for a while, like stars in the sky. He thinks E. vex uses the bioluminescence for misdirecting their predators. Actually, while he was filming, he said “I totally lost him right after I saw the bioluminescence.” Even, or especially, humans are distracted by pretty lights.

Despite E. vex being one of the more common and abundant ctenophores that inhabit tropical waters, there is a lot we don’t know about them: for instance, what do they do with the long filaments that extend from their end away from the mouth? Evergreen State College undergraduate student Nick Leonardi is comparing the structure of the filaments of E. vex with the tentacles of other ctenophores. Ctenophores are not actually radially symmetrical: they have a unique rotational symmetry, and E. vex is one of the best examples of this. Its keels are twisted as they run along the body, causing it to spiral as it swims.

E. vex also has a remarkably broad distribution, and lives in tropical Pacific and Atlantic waters. We are studying how this species maintains such a large distribution and are interested in the connectivity of populations because it gives us clues about the biodiversity of our world ocean. Jacob Winnikoff, a PhD student from the University of California, Santa Cruz, and an MBARI research assistant, is studying high-pressure tolerance and wants to find out how much of an animal’s ability to take the squeeze of the deep sea is based on where it has spent its life, versus being hard-coded into its species’ DNA. He thinks E. vex will help answer this question and especially looks forward to analyzing a sample collected with the MiniROV at 600 meters (1,970 feet) deep, the deepest this species has ever been found!

If you are a fan of nature documentaries, you may have come across a strange, gelatinous creature floating through the water with its many-colored glimmering comb rows. These luminescent animals are not, in fact, aliens or robots, but ctenophores (the “c” is silent, so it is pronounce “tee-no-fors”), commonly called comb jellies. Ctenophores are gelatinous marine predators that inhabit the ocean from the surface to great depths. And while they are fragile and delicate when removed from the water, ctenophores are a robust part of the ocean ecosystem. Of particular interest to the team assembled aboard this ship are the dramatic physiological and genetic changes that must occur for an animal to shift its habitat from shallow to deeper waters, a shift that requires adaptations to higher pressures, lower temperatures, infrequent meals, sometimes limited oxygen, and little-to-no light.

Many people may think of lounging by the pool and playing shuffle board when they hear the word “cruise”, but a research cruise is a different story. Working on a ship is hard; it requires long hours of manual labor as well as intense critical thinking, problem solving, and a great deal of collaboration on the part of both the scientists and the crew. But seeing the glimmer of a comb row or a flash of bioluminescence or the endlessly pulsing lobes of a ctenophore, and knowing that every day we are closer to understanding the complexities of these amazing creatures, makes the work more than worth it for all of us. 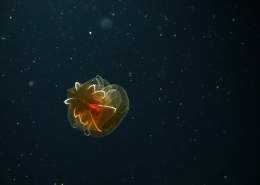 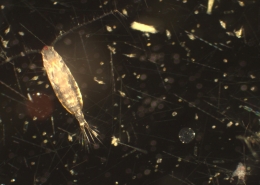 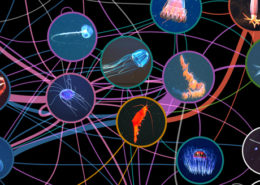 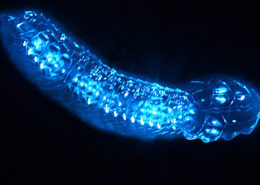