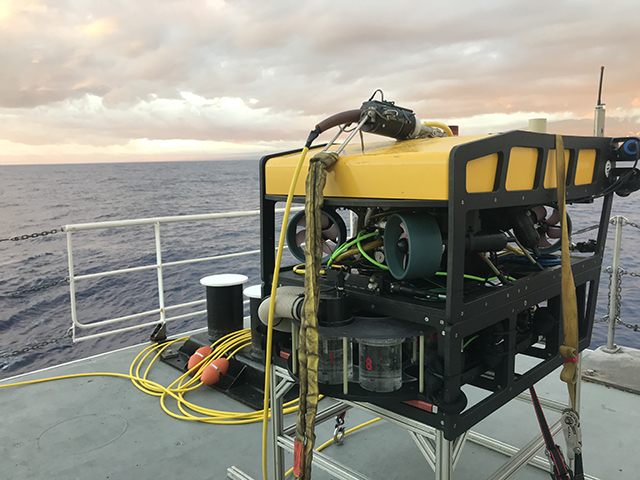 MiniROV on the back deck of the R/V Kilo Moana during sunset.

Our new favorite instrument is the MiniROV. The Mini has significantly increased our view into the ocean, especially at depth. When we participate in expeditions away from MBARI, we typically are limited to net tows and blue-water scuba diving. Both of these techniques are incredibly useful and we still employ them, however they are limited in what we can learn about the deep sea    .

The Mini has a suction nozzle with eight sample buckets, several high-definition cameras, numerous lights, and six thrusters that make it very nimble underwater. The ROV technology enables us not only to see the animals that the net captures during a tow, but also specifically target certain organisms for observation or collection. With the Mini, we can work both deeper to approximately 1,500 meters depth (4,920 feet), and for as long as 12 hours. This provides much more diving capability than our scuba divers, who are restricted to the top 20 meters (65 feet) of the water column for an hour at a time. Although we call her Mini, she is powerful and has some useful capabilities the larger ROV Doc Ricketts and Ventana don’t have, like two additional cameras that look out to the sides, so we have a 180-degree field of view. All of this can be packed up into shipping containers and can be sent to any ship of opportunity around the world. The Mini was designed and built by a very talented team of MBARI engineers, including Dale Graves, Alana Sherman, Chad Kecy, Mike Risi, Brian Schlining, Rich Schramm, and Frank Flores.

During this expedition, the Mini revealed an incredible diversity of ctenophores and siphonophores that could be distinguished as new or known species because they were observed and filmed at depth then captured intact. The trawl net catches many things, but it can be rough on delicate organisms. Even after our samplers were full, we spent time exploring the depths around the Hawaiian archipelago.

Due to unusual wind patterns, we were able to dive in the channel between Maui and the Big Island, where the winds usually howl through from the east. We called this the “land of giants” because we saw two species of ctenophore related to Thalassocalyce that were huge! Usually, the largest of these species are about the size of a grapefruit, but the individuals we saw were at least twice as big. Also there was a pyrosome (a colony of tiny bioluminescent, tube-like animals) that was about 1.5 meters (five feet) long, which is also much bigger than what we normally observe in Monterey Bay.

Although we have spent numerous hours exploring the open ocean off the coast of Hawaii, this expedition gave a much more complete view of biodiversity of deep tropical waters. Using the MiniROV, we were able to collect many known species that were great for population genetics and physiological studies as well as many new species yet to be described. Thanks to the Mini, we found and understand so much more.

Packing up the Kilo Moana. This is the van that houses the @MBARI_News mini ROV. #DEEPCHawaii2018 pic.twitter.com/FX9QKg4SRj

November 1-12, 2018 – The Zooplankton biodiversity group is working to answer questions about the biochemical, physiological, and genetic adaptations that ctenophores have evolved to help them survive and diversify in the deep sea.