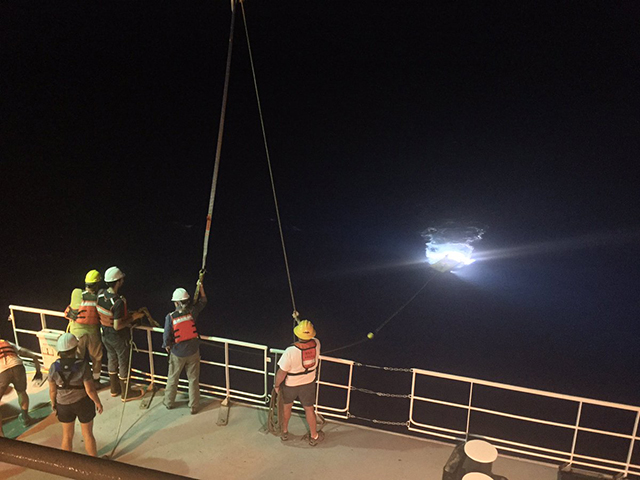 This year we are lucky to be able to participate in the blue-water scuba diving operations. It’s hard to describe the experience, but it’s kind of like floating in the most beautiful, ethereal, warm blue water. We use lines and clips to connect ourselves to a “trapeze” to ensure we don’t get separated from each other or the boat. Then we descend to 15 meters to begin collecting. Actually, collecting water-column organisms is hard! They are nearly invisible and good at escaping, so it takes some practice to successfully capture them. We use the lids of the jars to carefully “vacuum” ctenophores, siphonophores, radiolarians, and swimming snails (or whatever were looking for) into small glass jars. Once our jars are full or we run out of time we ascend to the surface and climb back onto the dive boat to return to the ship with our sparkly treasures.

During yesterday’s blue-water dive we successfully collected a few specimens of ctenophore called Eurhamphea vexilligera (E. vex for short, or when you are writing underwater). When our group was here last March, this was one of the dominant species we collected, but they were tiny. This year, they are less abundant, but “giant” (about the size of a business card—almost five centimeters). Well, maybe not giant, but this time we don’t need microscopes to identify them.

E. vex is special because it not only emits light along its comb rows but also secretes orange ink and blue-green luminous particles when it is disturbed. MBARI Postdoctoral Fellow Manabu Bessho-Uehara is studying the biochemistry of bioluminescence. He found that the light from the comb row diminishes quickly but the blue-green luminous particles continue twinkling for a while, like stars in the sky. He thinks E. vex uses the bioluminescence for misdirecting their predators. Actually, while he was filming, he said “I totally lost him right after I saw the bioluminescence.” Even, or especially, humans are distracted by pretty lights.

Despite E. vex being one of the more common and abundant ctenophores that inhabit tropical waters, there is a lot we don’t know about them: for instance, what do they do with the long filaments that extend from their end away from the mouth? Evergreen State College undergraduate student Nick Leonardi is comparing the structure of the filaments of E. vex with the tentacles of other ctenophores. Ctenophores are not actually radially symmetrical: they have a unique rotational symmetry, and E. vex is one of the best examples of this. Its keels are twisted as they run along the body, causing it to spiral as it swims.

E. vex also has a remarkably broad distribution, and lives in tropical Pacific and Atlantic waters. We are studying how this species maintains such a large distribution and are interested in the connectivity of populations because it gives us clues about the biodiversity of our world ocean. Jacob Winnikoff, a PhD student from the University of California, Santa Cruz, and an MBARI research assistant, is studying high-pressure tolerance and wants to find out how much of an animal’s ability to take the squeeze of the deep sea is based on where it has spent its life, versus being hard-coded into its species’ DNA. He thinks E. vex will help answer this question and especially looks forward to analyzing a sample collected with the MiniROV at 600 meters (1,970 feet) deep, the deepest this species has ever been found!

November 1-12, 2018 – The Zooplankton biodiversity group is working to answer questions about the biochemical, physiological, and genetic adaptations that ctenophores have evolved to help them survive and diversify in the deep sea. 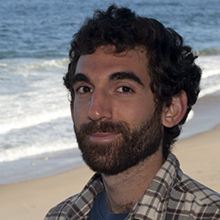