Careers in oceanography—
a changing world 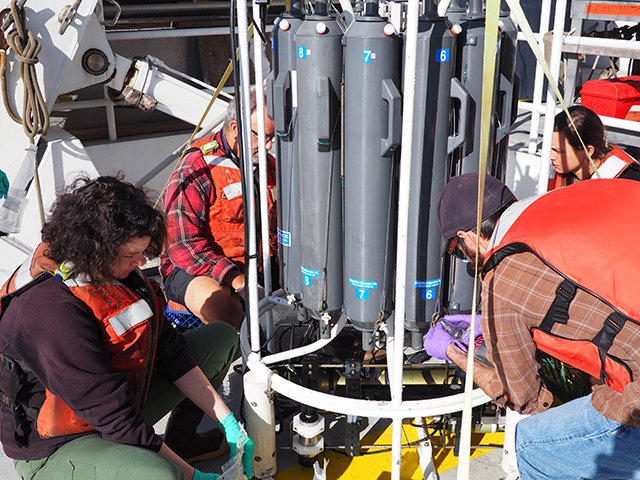 A group of researchers sort water samples collected in large bottles in a CTD (conductivity, temperature, and depth) rosette aboard the research vessel Western Flyer during a 2017 CANON expedition. Photo: Meilina Dalit © 2017 MBARI

Every three weeks or so, oceanographer Tim Pennington goes to sea on an MBARI research ship to add more observations to MBARI’s longest-running data set known as the Monterey Bay Time Series or MBTS. This work has been part of the routine for a team of MBARI researchers for more than 30 years. But that doesn’t mean the way Pennington and his team collect the data hasn’t changed. Today, oceangoing robots are taking on ever-more complicated tasks and ushering in a technology revolution in oceanography, transforming the everyday work of ocean researchers in the process. Now in addition to the MBTS cruises, five autonomous platforms—a mooring, three robotic submarines, and a wave-propelled surface glider—are deployed on the same route, collecting data and samples in parallel with the scientists aboard the ship.

The MBTS is a unique long-term record of trends and processes in our local waters. It is made up of measurements of ocean properties meticulously taken every two to three weeks for the past 30 years. 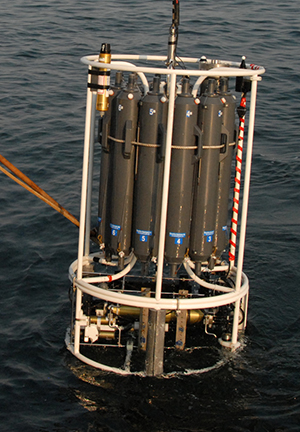 This CTD rosette—which carries a suite of sensors to measure physical properties of the ocean and bottles to collect water samples—is recovered from Monterey Bay. Photo: © 2008 MBARI

Traditionally these data were collected by Pennington and his colleagues by boarding a ship, steaming over 50 kilometers (30 miles) offshore in Monterey Bay, collecting water samples, and measuring temperature, acidity, and the presence of microscopic algae along the way. By carefully collecting this information at regular intervals in the same locations, scientists have gained an understanding of a wide range of changes in Monterey Bay, from seasonal variation, to the episodic appearance of El Niño conditions, to longer-term changes over the course of decades responsible for the waxing and waning of fisheries stocks like sardines.

These regular expeditions require expensive ships and crews—and the entire careers of seagoing researchers. Pennington’s work as part of MBARI’s Biological Oceanography Group, which is led by Scientist Francisco Chavez, involves the routine use of a CTD profiler. CTD stands for conductivity, temperature, and depth, the properties measured by the profiler’s electronic sensors. These sensors are often mounted on a large frame equipped with several water-sampling bottles. The entire package of instruments is lowered into the ocean to take measurements and collect water samples at various depths. A full-time technician is usually needed to operate and maintain the equipment. 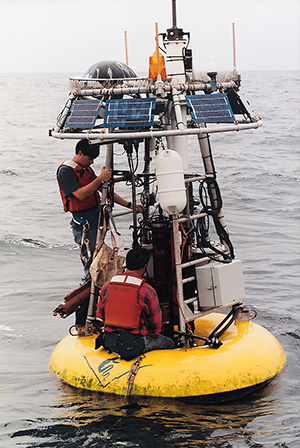 MBARI’s first autonomous platform, the M1 mooring, is located in central Monterey Bay on a time-series site occupied intermittently since 1929. The mooring, anchored in 900 meters of water, has been deployed nearly continuously since the early 1990s, collecting oceanographic data (such as salinity, temperature, oxygen, chlorophyll, and currents). Early in their oceanographic careers, technicians Peter Walz (left) and Tim Pennington conducted regular maintenance on the mooring; both are now senior staff members. Photo: © 1998 MBARI

MBARI also maintains suites of sensors on ocean moorings to add to the MBTS. These are among the earliest autonomous research platforms (“autonomous” means they don’t need constant human involvement to collect data).

Now robotic vehicles augment these traditional methods, adding a new layer of information to our understanding of the changes taking place in Monterey Bay. MBARI has been at the forefront of developing new platforms and sensors that can navigate through the water on their own and collect precious data and water samples as they travel. Expanding the suite of oceanographic sensors available represents an exceedingly important goal for MBARI.

Over the past 10 years, many of these vehicles have evolved from demonstration-level deployment to routine operation. Their transition to operational status provides a glimpse into the future of oceanography.

By conducting cruises and using traditional data-gathering methods alongside the new autonomous instruments and vehicles, the results of the two approaches can be compared. The team looks at whether the new data sets are painting the same picture as traditional methods. For this reason, the MBTS isn’t just an invaluable data set in its own right, but is also providing a natural template for the development and testing of autonomous vehicles and platforms. The MBTS has thus become a program of many platforms and people, requiring close coordination between science and engineering staff. It turns out that hardening autonomy into regular operational status is both challenging and rewarding!

Pennington appreciates the new autonomous robots. “They can produce beautiful pictures with very high-resolution data that we can just never get with traditional CTD casts. That is the compelling utility of autonomy … it helps us do better science,” said Pennington. “Ironically, autonomy increases our ocean presence while decreasing our need to go to sea.” 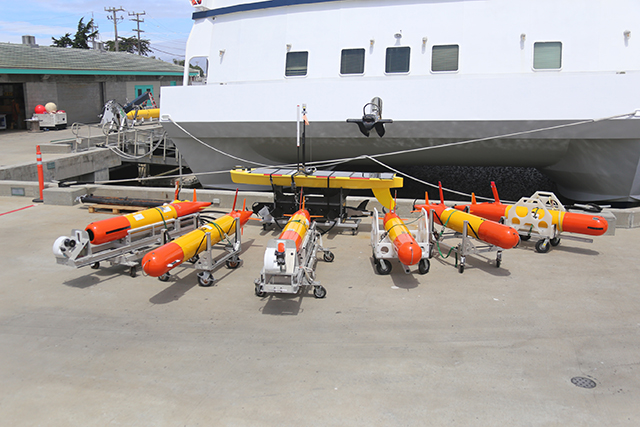 A fleet of six long-range AUVs and a Wave Glider on the MBARI dock prior to deployment for a large field study in Monterey Bay in 2017. Photo: Susan von Thun © 2017 MBARI

Autonomous platform values and operating costs are also far less than—somewhere near one-tenth—that of ships and shipboard work (upwards of $20,000 a day), although engineering and infrastructure costs in autonomy remain very high and the Monterey Bay Time Series is now using five platforms simultaneously. Even so, on both per day and spectacularly on per datum bases, autonomy is a bargain. 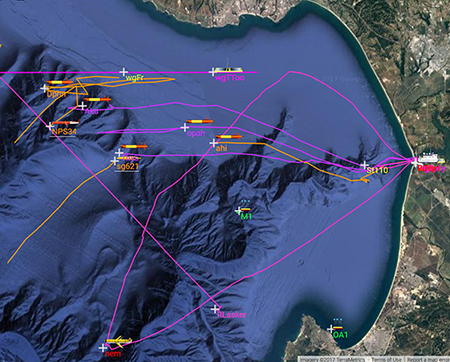 A digital representation of locations of multiple seagoing assets (including ships, AUVs, and gliders) during a CANON expedition in Monterey Bay. Image: © 2017 MBARI

In October 2018, the Biological Oceanography Group concluded a CANON expedition aboard the R/V Western Flyer in Monterey Bay—an interdisciplinary field experiment aimed at understanding ocean biogeochemistry. This year’s science focus has been on using DNA to take a census of marine diversity, but an underlying CANON goal is to “exercise the vehicles,” as Pennington puts it. During the recent CANON experiment, 10 autonomous platforms (four submarines, two wave-propelled surface gliders, two instrumented floats, and two moorings) and a ship were deployed simultaneously to accomplish different and often new coordinated tasks. The CANON cruise is a wonderful opportunity to conduct ship-based sampling and test a wide range of autonomous technologies simultaneously.

After 2020 the hope is to discontinue the MBTS shipboard work and completely hand the time series over to the robots. These autonomous sensors, samplers, and platforms are becoming part of the oceanographic “toolkit” for conducting routine work at high resolution. But this doesn’t mean that ships, the ship’s crew, or researchers will no longer be needed. Instead, as oceanographers learn to use autonomy, they are also learning to ask new questions in new ways, and many of these questions will require the sort of innovative study that can only be supported by ships and their personnel. Thus MBARI is planning to build a new, multipurpose ship to replace the aging Western Flyer. 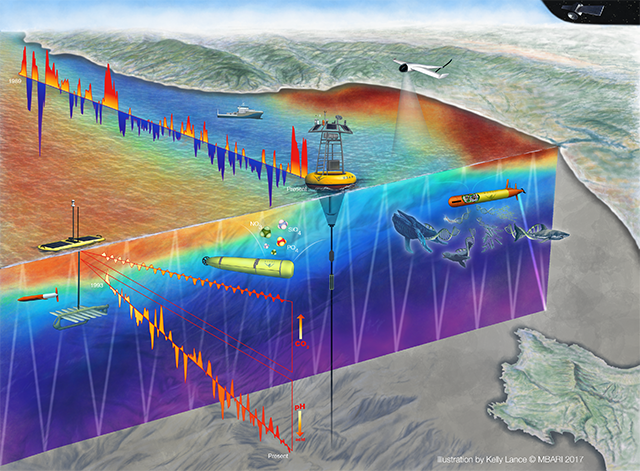 Full autonomy for the Monterey Bay Time Series: After 2020, the hope is to discontinue shipboard operations along the MBTS line and replaced them by autonomous platforms. This transition entails both positive and negative change. On the negative side, a robot-driven MBTS will be less flexible and important sample types may have to be dropped. On the positive side, greatly increased detail in data collected is autonomy’s greatest—and compelling—benefit. The sections produced by the moorings (high temporal resolution) and AUVs (high spatial resolution) are impossible to duplicate using CTD casts. Illustration: Kelly Lance © 2017 MBARI

While the development of robotic vehicles heralds a substantial shift in oceanographic research, their capabilities also highlight the extraordinary knowledge base provided by traditional methods and oceanographers. On reflecting on autonomy in oceanography, Pennington said, “I’m proud to have been part of the old, seagoing school, where each datum was often obtained individually. Much of what we know about the oceans was learned in this way.”

His appreciation for the commitment and effort required by historical methods has deepened as autonomous vehicles and their “data streams” have become more prevalent. As technologies evolve, so do the ways we access and study the ocean. What the next technological revolution will be, we don’t yet know. MBARI’s dedication to developing innovative technologies for studying the ocean will keep the institute at the forefront of what’s to come. 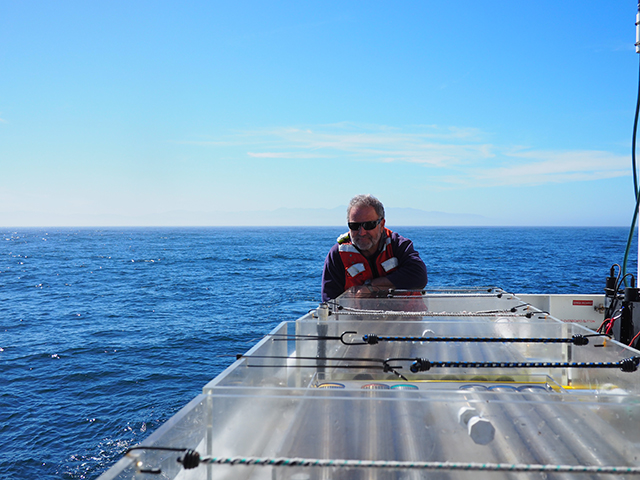 Senior Research Specialist Tim Pennington at sea aboard the R/V Western Flyer. His data on primary production (an indicator of the growth of microscopic marine algae) are obtained one measurement at a time. Photo: Meilina Dalit © 2017 MBARI

May 29, 2019 – During MBARI's Spring 2019 CANON experiment, researchers will study the vertical migration of ocean animals using sound, video, DNA, and conventional sampling equipment such as nets.
November 20, 2018 – Oceangoing robots are taking on ever-more complicated tasks and ushering in a technology revolution in oceanography, transforming the everyday work of ocean researchers.
Sept 13, 2017 – Aerial platforms such as UAVs, or drones, as they are more commonly known, are making headway into scientific applications due to the variety of remote sensing capabilities they offer.
Jun 5, 2017 – In the spring of 2015, Monterey Bay experienced one of the most toxic algal blooms ever. A new paper shows that this bloom became particularly toxic because of an unusually low ratio of silicate to nitrate in Bay Waters.