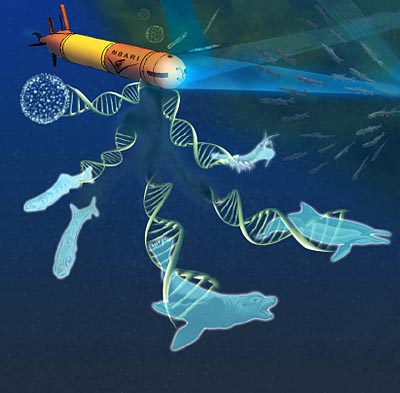 How can you track changes in complex marine ecosystems over time? MBARI scientists are part of a team trying to do just this with a five-year, $7 million grant through the National Ocean Partnership Program. The proposed Marine Biodiversity Observation Network (MBON) will combine species counts and ecological data from existing research programs with newer data gathered using cutting-edge satellites, robots, and genetic analyses.

“Our main task is to figure out how life in the sea is changing,” said MBARI Senior Scientist Francisco Chavez, the leader of the MBARI portion of the project. “Right now, we don’t have the means to track life in the sea in a sustainable manner.”

The ocean supports all sorts of life ranging from bacteria to whales. This biodiversity—or variety of organisms—fluctuates naturally in our oceans. But a large loss in biodiversity, whether natural or human caused, would most likely harm ocean health and fisheries. Presently, shifts in marine biodiversity may be missed because baseline biodiversity counts don’t exist. Chavez and his colleagues will design new genomic techniques to measure biodiversity and augment the new data with numbers from existing ocean monitoring programs.

Chavez and his team need to sample across a complex patchwork of ocean ecosystems, but the plan needs to be economical and feasible. The scientists will run their biodiversity pilot program through two national marine sanctuaries: the Monterey Bay National Marine Sanctuary and the Florida Keys National Marine Sanctuary. The sanctuaries were created in part to act as preserves for marine biodiversity. By focusing on these two regions, the team will test whether their methods work well across multiple marine ecosystems including deep-ocean canyons, continental shelves, estuaries, and coral reefs.

The team will combine ecological data with regional maps to classify the sanctuaries’ habitats. This will allow them to sample each habitat effectively as variables such as temperature, upwelling, and currents change seasonally. 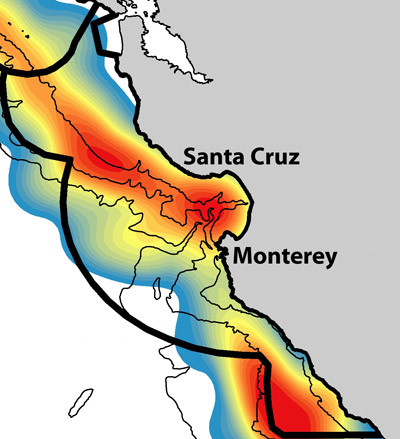 Scientists with the Marine Biodiversity Observation Network will combine new biodiversity data with current population counts, like these krill counts gathered by NOAA. Krill populations are densest in the red regions of the Monterey Bay National Marine Sanctuary (black outline).

Even within the smaller sanctuaries, scientists can’t tally every organism in the sea, especially the microscopic ones. Chavez and his team hope to use organic material suspended in the water—bits of sluffed-off skin, scales, mucus, microbes, and excrement—to identify the organisms living in the area. This marine dandruff contains genetic material, which the scientists hope to use to track biodiversity.

One of the goals of the MBON project is to use this “environmental DNA” (eDNA) to detect a wide variety of different organisms, from microbes to marine mammals, using a single water sample—something that has never been done before. The MBON team will use autonomous underwater vehicles and gliders to collect water samples over large areas without sending humans out to sea. These pre-programmed submarines will traverse the sanctuaries and return with water samples brimming with eDNA. Back in the lab, MBARI researchers, along with teams from Stanford University and the University of South Florida, will fine-tune existing genomic protocols to identify the DNA from a variety of different groups of organisms.

The researchers also will take advantage of ocean data already being gathered. Currently, commercial fisheries and ocean scientists track populations of a few key species including whales, rockfish, and krill. At the same time, MBARI and other marine institutes amass reams of physical data about ocean conditions including temperature, current, and nutrient measurements. Other organizations, including the National Aeronautics and Space Administration, the National Oceanic and Atmospheric Administration, and the U.S. Geological Survey, use satellites to record sea-surface conditions.

“Scientists struggle with putting the biological information in an environmental context,” said Chavez. “They don’t have the luxury of engaging with the physical data. One task for this team is to try to compile that information together in one place.”

Once scientists have access to biodiversity and physical data in one spot, they can ask questions about population dynamics. For example, krill populations in Monterey Bay continuously ebb and flow, and these tiny shrimp-like animals have a huge effect on ocean food webs. Many other animals, including many commercially important fishes, feed on krill, and the krill themselves eat vast amounts of plankton. The MBON database could allow scientists to identify the ocean conditions that influence the size of krill populations. 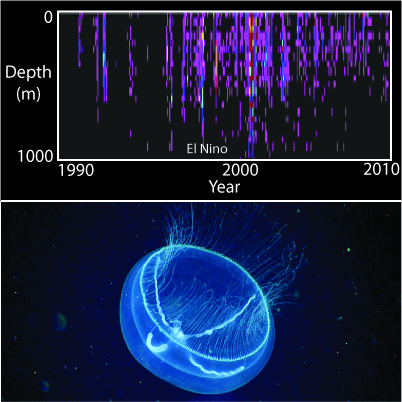 Populations of animals like this deep-sea Mitrocoma jelly fluctuate with environmental factors like currents, climate, and salinity. One of the goals of the Marine Biodiversity Observation Network is to identify the links between shifting environmental variables and changes in populations of ocean organisms.

In the long term, Chavez’ team hopes to identify a subset of key variables that highly influence regional marine biodiversity. If they can find this key set of variables, researchers will be able to predict changes in biodiversity better than they do now.

Data from the project will be useful for a variety of groups, from fishermen to politicians. Fisheries managers could use the team’s findings to preserve fish stocks. Lawmakers, armed with good science about the effects of pollution and global warming on marine biodiversity, can devise better ocean regulations. The program could allow marine-sanctuary staff to gauge whether biodiversity or water quality is being protected within the sanctuaries or if invasive species have entered the area.

With so much at stake, a variety of federal agencies are stepping up to fund marine biodiversity research. NASA, NOAA, and the Department of the Interior’s Bureau of Ocean Energy Management split $17 million between the Monterey/Florida team’s MBON mission and two other projects. The other teams will test methods of assessing biodiversity in the Santa Barbara Channel and the Chukchi Sea near Alaska. As one partner in the MBON grant, MBARI is collaborating with Stanford University’s Center for Ocean Solutions, the Central and Northern California Ocean Observing System, the Monterey Bay National Marine Sanctuary, NOAA’s Southwest Fisheries Science Center Fisheries Ecology Division, and a wide variety of institutions in Florida.

Ocean ecosystems are changing rapidly due to increases in fishing pressure, ocean acidification, temperatures, a varying climate and other human influences. If successful, the Marine Biodiversity Ocean Network will provide new and revolutionary methods for detecting these changes and protecting marine biodiversity.

May 11, 2015 - How can you track changes in complex marine ecosystems over time? MBARI scientists are part of a team trying to do just this with a five-year, $7 million grant through the National Ocean Partnership Program.
May 3, 2017 – New partnerships and technologies add an exciting new dimension to MBARI's 2017 CANON experiment.
Dec 13, 2018 – Ocean researchers propose a new "pole-to-pole" Marine Biodiversity Observation Network

One of the longest-standing projects of the Biological Oceanography Group is the Monterey Bay Time Series. Research ships and moorings have collected detailed datasets of temperature, salinity, oxygen, CO2, phytoplankton and other changing variables since 1989.