Our 2017 Arctic Expedition kicked off with members of the three science teams from KOPRI, MBARI, and the GSC assembling in Barrow, Alaska, on August 26 and transferring, via helicopter, to the R/V Araon, which was anchored just offshore. Within two hours, and after many helicopter flights, all personnel and equipment were safely onboard. We enjoyed our first meal of delicious Korean food and began to unpack and settle into what we’ll call home for the next 20 days. At noon on August 27, R/V Araon lifted anchor and we began our transit to the survey location near Herschel Island, Canada. 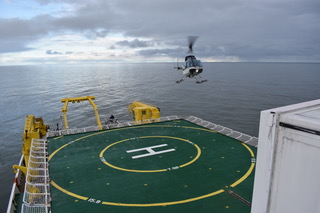 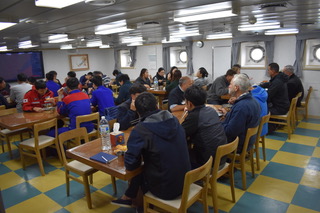 Staff enjoying an authentic Korean meal in the galley.

During the transit we have been unpacking and setting up survey gear and computers. Among the most challenging pieces of equipment to setup have been the remotely operated vehicle, known as the MiniROV, and the mapping autonomous underwater vehicle (AUV). Setup for these vehicles includes assembling a variety of components, running power lines, data connections, and hooking up antennas, some of which require routing cables long distances from the operating location to an antenna that’s been mounted high above the wheelhouse.

The permits for science operations during this expedition are entirely in Canadian waters. Because of this, science operations did not start until the US-Canadian border was crossed at 44 seconds after midnight on August 29th, the start date of the permit. Existing bathymetric maps of the seafloor north of Yukon Territory have little detail so the first 30 hours of science operations were dedicated to conducting multibeam sonar surveys using the Araon’s hull-mounted sonar system in an area on the western flank of the Mackenzie Trough. The goal of collecting ship-based multibeam sonar is to help the science staff to identify areas of interest that we will return to later in the cruise, for more detailed studies using the mapping AUV and MiniROV, and for collecting sediment cores. Finding sites of particular interest can often be like finding “a needle in a haystack.” Using ship-based maps helps find those” needles.”

The launch and recovery of the AUV and ROV can be quite challenging, especially the first few times the procedures are undertaken on any ship that is new to us. Adding to the complications on this expedition, we have an English- speaking science party and a Korean speaking ship’s crew, cold weather, and variable sea conditions. The science team decided it would be prudent to test the ballast and equipment operation of each vehicle so, in favorable sea conditions while in the vicinity of Herschel Island, we practiced launching and recovering both the AUV and Mini ROV. Not only did this provide us with an opportunity to practice launch and recoveries, it also gave us a chance to perform the in-water systems checks and ballast adjustments. 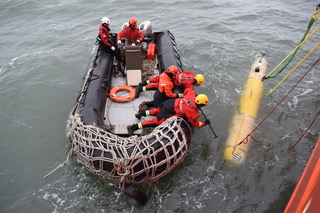 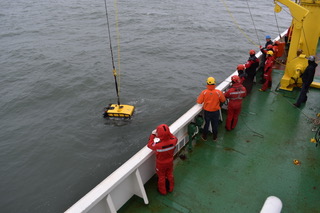 The MiniROV is tested for proper operation.

The AUV was lifted by the crane and carefully moved over the side of the R/V Araon while tag lines were tended by AUV and ship’s crew to control the AUV as it was lowered into the water to assess its ballast and assure the integrity of the electrical cables. A small boat was also launched from the Araon, manned with personnel from Araon and MBARI. This boat will be used to recover the AUV and bring it alongside the ship after its survey missions. During this test the crane’s shackle released from the AUV. This simple test had suddenly become a real AUV recovery. After many attempts, in a sea state that was more challenging than it first seemed, the small boat team resecured the shackle to the top of the AUV and the Araon deck crew hoisted it up and secured it in its cradle.

Shortly after recovering the AUV, the MiniROV was deployed for a test dive as well. ROV Chief Dale Graves and pilots Frank Flores and Dave French deployed, tested, and recovered without a hitch. This practice run allowed the crew and the science team to tweak their methods and should allow for smoother operations in open sea, when conditions will likely be more challenging. All systems are now “go” and we eagerly anticipate beginning the ROV and AUV surveys. However, a five-day long multichannel seismic profiling program will be conducted before the AUV and ROV program commences.